One of the unexpected pleasures (if there are any) of moving is discovering or seeing things that have not seen the light of day for quite a while.

Like eighteen years in a few cases.  In that case, it was a whole package of flamingo drinking straws with little puffy flamingos clinging to the straw. Originally purchased for a party - now they DO need to be used.  They are paper, not plastic.

Boxes are being packed.  Items are being set aside For Sale.  It is happening.  One day at a time.
Slowly, but surely.

Interestingly, as I have looked around at all to sell, many memories have returned of the acquisition of this item or that.  EVERYTHING has a story.  Seldom are things purchased in a store, but, rather
from the individual which provides rich and evocative thoughts.

Take the first item that I am reluctantly relinquishing.......An assemblage by Anado.  It was purchased ten years ago when he was just beginning to make a name for himself.  It is so detailed and delightful to look at, especially since the angel twirls and the old bakery case adds an eclectic element to it. 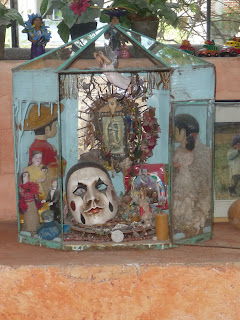 When I saw it, I just had to have it.  Well, since then Anado has become quite a well known "outsider" artist with unique and quirky creations.  Nothing like this, which makes it very special to me.  In researching what to ask for it when I sell it in a few weeks. it was interesting to note that it had increased significantly in ten years.  So parting will be such sweet sorrow, but maybe the dollars will help to form a nest egg for upcoming necessities.  Hopefully the new owner will enjoy it each day as I and my grandchildren have...

Then there is Haitian art.  This is one of the signed pieces purchased from a Haitian man in Montrose in Houston over thirty years ago.  We talked about Haiti, why he had left and what he hoped to achieve in the USA.  Often, thoughts of that man cross my mind.  Now, especially after the earthquake in Haiti and the loss of so much old art, the four signed pieces I have by different old Haitian artists have increased in value as well.  At one point I did track down one of the artists and he now lives in NYC while making a living as an artist! 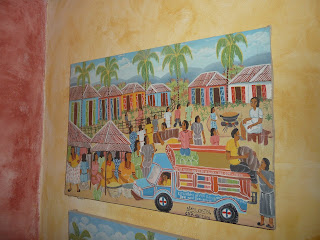 See what I mean?  The emotional attachment and the stories?  Remember the "paint by number" phase in the USA in the 40's and 50's?  That would be 1940 and 1950!  Well, my sister swears that
I did this painting.  She had it framed and sent it to me for my 65th birthday.  Truly there is no way
that I remember having done this.  But, no one argues with their big sister......It is time to pass it on. 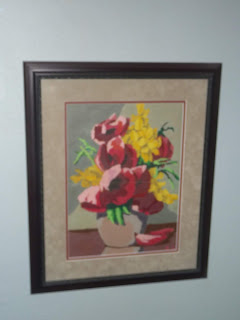 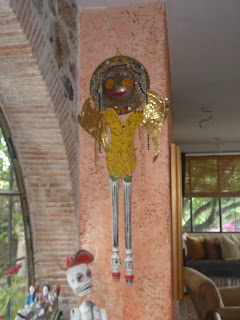 The "hubcap woman", so named because her head looks like it was made out a hubcap is signed.  It was a gift from a dear
friend.

Not only her smile, but her gold wings, always make me smile as I walk by her on a daily basis.  Surely she will
bring a smile to her new owner. 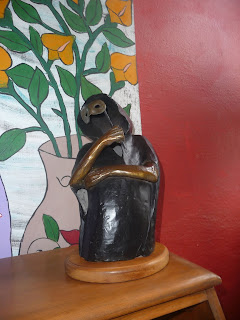 This limited edition bronze by John Dawson, an internationally acclaimed artist who has been featured in many, many one man shows and art publications came to me when my involvement in
the Neurofibromatosis Foundation was an all consuming part of my life.  NF is often mis-identified
as Elephant Man's disease.  A friend's son had the disease and in the 1980's it seemed to me that I needed to get involved in finding a cure for this disease by volunteering to educate people about the disease.  Serving on the board of the state chapter was a labor of love.  Then when Children's Hospital in Boston identified the gene that causes the disease, it was a victory for all the thousands of people who have the disease and the volunteers and doctors working on a cure.  NF is more common then Muscular Dystrophy or Cystic Fibrosis but it is a "hidden" disease meaning many people do not go out in public, etc.  There has been much progress since the 80's.  Check it out online.  This explanation of the disease helps to explain why there is no face and a mask on the sculpture.  To me, it is very poignant.

So, each and every item is a walk down memory lane of a time in the past when something was acquired because it had a meaning to me.  If you notice, color seems to be a recurring theme, except for the bronze.

In the new house, color will be subdued.  With much less wall space and much less display space,  lots has to go.........it is time.

My loss is your gain.  It would be so wonderful if things that I have treasured would pass on to friends, blog readers and people who like these things.

Here is something that once I did purchase , the need to get it to San Miguel was quite a story. 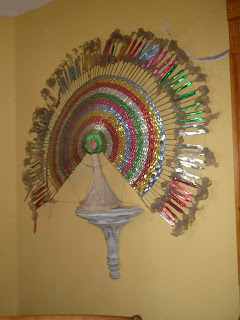 It was purchased in Mexico City from "Victor" who procures museum quality items to sell to museums.  It is an extremely old "danced" headdress from El Tajin used by the Voladeros when they do their ceremonial dance while up on the pole on a tiny platform and then circle down to earth in many revolutions.  I have not been able to identify what bird the feathers are from, but it is quite a large piece.

Here is how it got to San Miguel.  A friend said her husband was flying into Mexico City and renting a car and driving to San Miguel.  She said he would not mind connecting with Victor in the Historical District and bringing the headdress to SMA.  He rented a small car, too small for the headdress, and had to go back to rent a bigger car so it would be able to sit upright in the back seat!  Can you imagine someone being nice enough to do that?  Well he did.  It sure adds to the magnetism of the piece.  Displayed better then I have done, it could be a "feature piece" spotlighted on a wall - especially if you like indigenous clothing.  It is a "one of a kind" piece.

Life is a greatly traveled road......especially at my age.  But, the fun is, I don't even have to leave home with all these memories to share with myself.........and you!

It has been a pleasure watching you traverse your memory path this month.

Thanks Steve. We have had some good laughs, haven't we?

The bronze piece is one of my favourites. Also the painting of a market scene viewed from above…

Peter, good morning. Hop on a plane and come get both! Then you'll have a bit of
SMA to look at each day..........wish ya'll were here. Selling lots of outdoor plants too......the garden will not look the same after I leave, sadly.