Life is ALWAYS a Surprise! 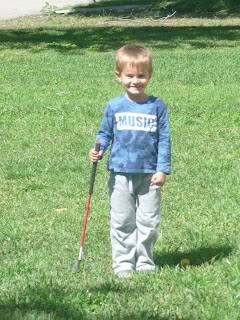 One of the reasons that I jump out of bed each morning, usually with enthusiasm, is to see what the day will bring.  Seldom is the day disappointing.

That was the reaction last Saturday when a trip to my nephew's house along with his lovely wife was in the plans.  Off we went early.  Greeting us in the front yard were Austin, who has grown a lot since
last year.  He wanted to show us how great his golf swing is, among other things.  He asked me to take his picture.  I quickly did so as later he wanted absolutely "no photos".  Kids say the darndest things. 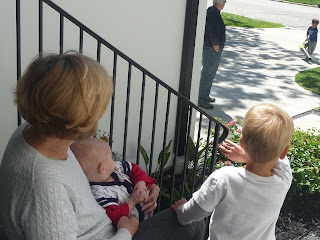 The newest addition to the family, Taylor was brought outside to watch the fun in the front yard.  Grey, who is two was there as well.  Three boys - what a beautiful family! 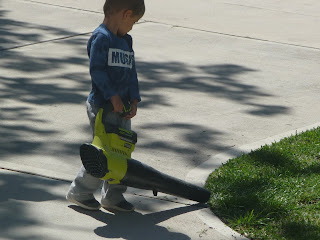 Austin with the leaf blower was a show in and of itself.  Then the "show"began.  It was discovered
that if you put tennis balls IN the leaf blower, it would shoot them out.  Hilarious to watch the little boys and the grown up boys having fun with this new discovery.  Who needs toys when you can make your own fun? 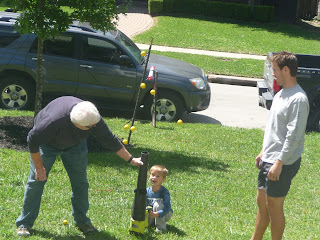 The next evening, another surprise was having dinner with friends at their new high rise home.  My old time friends, Sheila and Mark, were rescued from the floodwaters of Hurricane Harvey, literally by boat.  Their house of many, many years was flooded for the second time and that was it.......no more.  They lost just about everything and now are ensconced on the fourteenth floor of a high rise near the MFA and Hermann Park.

It is astounding to see the amount of trees in Houston from up high.  In addition, the sunsets are
always magnificent in Houston.  Here is a view that we experienced after a scrumptious dinner.  It was so much fun to spend time reminiscing about our thirty-five year friendship.  That friendship started out as a business relationship and then grew to be so much more.  I'm grateful for friends.  It is such a joy to look back over their lives from marriage to near retirement now! 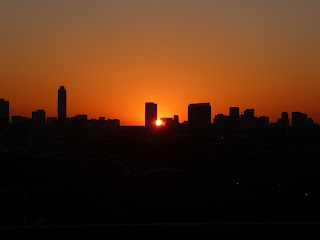 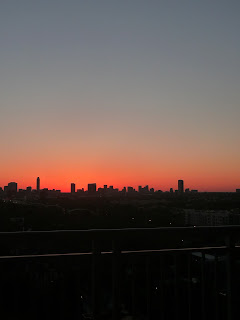 Early in the week, I discovered a Cajun restaurant near to where I'm staying.  It was fun to go there and have red beans and rice, which is a dish I grew up eating as a child and teenager in Louisiana.
Surprisingly, even though the State of Louisiana is adjacent to Texas, there are few Cajun restaurants in Houston.  It was a treat to find this one.  They also make "real" po-boys, the way they are served
in New Orleans.

In the essence of discovery, another new restaurant was  experienced on Wednesday.  Prior to a review in the Houston Chronicle by Food  Critic, Allison Cook, my friend, Ann Criswell former Food Editor for the Chronicle for thirty-four years, had suggested that we gather for lunch at a new Ecuadorian-French restaurant in the Heights.  The name is a mouthful - Maison Pucha Bistro.  Pucha is the name of the three Ecuadorian brothers who oversee the kitchen, the pastries and the front of the house.

Four of us gathered to dine al fresco at about 1:30.  A great time to dine because usually the rush is over.  What an amazing treat we experienced.  Going without expectations always works for me.

Never could I have imagined that I was in for a "complete" dining experience.  Something that
rarely happens.

From the waitstaff who noticed the sun was beating down on us and circled the umbrellas so no
sun was on us to the service of the meal.  What a magnificent meal. 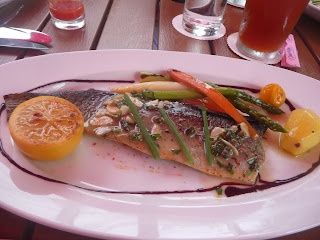 The main entrees we ordered were Trout Almondine (divine); Lobster Ravioli; Steak Sandwich and Duck Confit.  Everyone of us were thrilled with our choice. 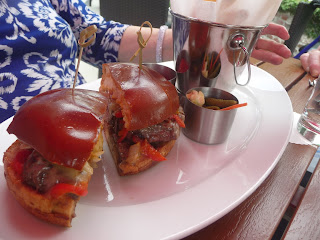 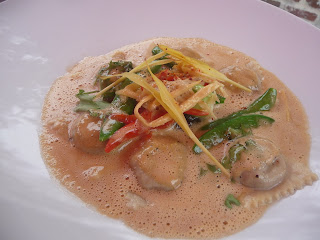 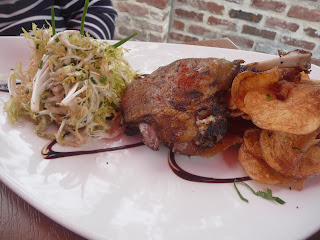 As if the entrees with their delicate sauces and flavors was not enough, we just "had to" try
the desserts that everyone was raving about.  Believe me, from the chocolate souffle to
the creme brulee to the peach melba, we were thrilled both with the exquisite presentation
to the last taste of each dessert. 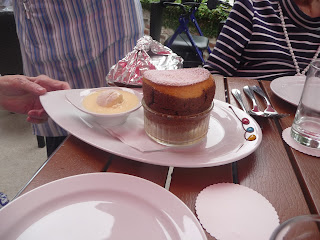 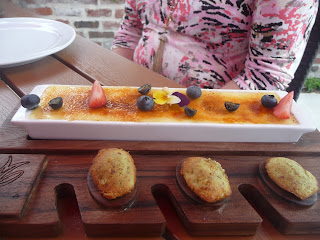 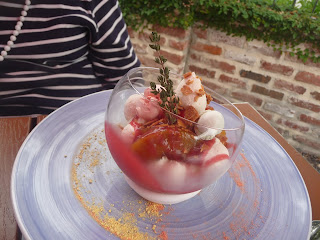 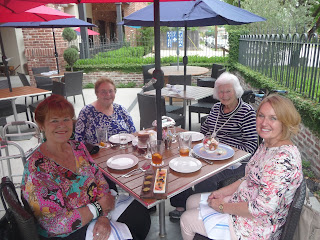 As you can see, our contented smiles said it all.  The waiter enjoyed our enthusiasm and praise
for the whole "event".  It was a three hour lunch.  What a delicious and fun afternoon of food
and friends and family.

By the way, that luncheon was held on the day that I was supposed to have had knee replacement surgery.  This was waaaaaaaaaaaaaaay more pleasant.

So far next week has nothing on the calendar.  It will be delightful to see what happens!

It's tough to read about someone who has had their home flooded twice. Houston has had more than it's share of flooding and rain lately. As I sit here writing this, here in Fort Worth, we are getting some much needed rain.

Your al fresco lunch looks great. I have friends who go to Houston every year and will mention restaurant to them.

Well, it's not Cajun, but Houston does have the great Creole restaurant, Antoine's, which I got to go to once back in the 80s. It was the first place that I ever had crawfish. I don't recall what else I had because they were a revelation! That and, well, it was a long time ago.

You know how to do it right, Barbara!

Scott, with over 14,000 restaurants, Houston has so many superb restaurants that one can hardly go wrong..........I've enjoyed visiting old favorites as well as new. Yes, Antoine's has been on the scene for a long, long time. I never thought of it though as a Creole restaurant.

Indeed, the hurricane and flooding situation in Houston has been around a long long time. I never realized how erratic the weather can be here. It makes me appreciate
even more the sunshine and stable weather of SMA.

thanks Benne' - I'm blessed with great family and friends......as you are as well! Would love to get back to NOLa one of these trips. So many great memories......

There seems to be no shortage of good times, enjoy! Lunch looks superb!

BABS CAN YOU PLEASE GET IN TOUCH WITH ME? I NEED TOUR THOUGHTS KNOWLEDGE EXPERIENCE AND TIME THANK YOU

UNCLELOUIEGRICK@GMAIL.COM OR RICK RUSSO ON FB.

Rick Russo,There are 5 Rick Russo's on FB - none looking like the godfather. What is this in reference to? Sorry, I'm not directly emailing you. I'm cautious now after losing my LAST COMPUTER to someone who nailed me with the Wanna Cry virus. PLEASE
give me more information. Thanks.