From the "sublime" to the Concrete Jungle.

Here is the final photo in our road trip to Austin and back last weekend...........ALL of us, before the four of us headed back to the Concrete Jungle known as Houston. 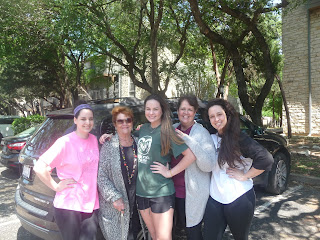 This return trip was just that a trip...........no stops except for gas and bathrooms and then on to my daughter's home.  I then headed back on the freeways to my friend's house.  Sunday evenings, I discovered, are a time to travel the freeways.  Thankfully, there was very little traffic.  Whew.

After spending two weeks at The Hallmark with my dear friend Martha, it was time to move on.
On Tuesday, I relocated to my brother and sister-in-law's house for a couple of weeks, at least.

They were prepared for me as this was going to be where I stayed after surgery.  Now that there is no surgery, it is just a nice, relaxed visit.

EVERY ex-pat, I presume, when making a trip to the USA, has some shopping to do.  I had basically not even paid attention to my list since arriving.  My list is not big, but there were many places I needed to go to get things like new pillow shams, fabric to recover the chaises on the downstairs patio, some new Merrill sandals and various other things.

Yesterday, my sweet sister-in-law and I took off at about 11AM with a list of five stores to go to.
She was driving and we headed to Sugarland.  Yes, that is actually the real name of a suburb of Houston because there used to be a big sugar mill in that area.  I was SO happy she was driving as
she knew exactly where to go and had a plan, as she knew what store was near to another, etc.

I figured we might make it through two, maybe three places.  Me, of little faith.  We got to all the stores and got everything on the list!  It was unbelieveable. We were gone about five hours.

Two things surprised me.  How many stores there are - mile after mile after mile.  Also amazing is the number of restaurants, everywhere!  Another interesting thing to see was the number of people
out shopping.  We did not enter any store that was not full of people.  People of every race and creed.
I had forgotten the diversity of Houston.

To top it off, everyone is very courteous and helpful.  At least, that was the case yesterday.

Our last stop was at JoAnne's fabric to get outdoor fabric for the chaises.  While waiting in line
we had a conversation with a woman who teaches quilting at that store.  Then the woman who waited on us was a delight after we had waited and waited to be "waited" on! 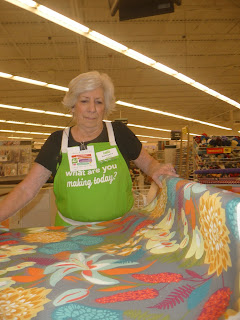 Her name was Sandy.  She had had a rather difficult task before waiting on us, but she shrugged it off as "just in a day's work".  THEN I needed more fabric then she had in that store, but she kindly offered to check other stores and made arrangements for the rest of the fabric to be sent to the store we were shopping at so we did not have to "journey" to Fry Rd, wherever the heck that is - it was
at least thirty minutes away.

When she wanted my name and information, I gave her my card, which she promptly attached to her apron so she would not lose it.  The rest of the fabric was ordered, and I have no doubt when we return to that store next week, she will be there and so will the fabric.  Another six yards!

We DID stop midway through this shopping marathon to have barbecue for lunch.  You cannot come to Texas and not have barbecue.  So far I had had none.  But, how we got to the restaurant was interesting.  Annette, my sister-in-law, asked me what kind of food I wanted and I said "BBQ?"

She then put that word in her phone to find out where the nearest BBQ place was located!  Then there was a map to get us there.............a GOOD reason to have a "fancy" phone!  The BBQ was delicious as were the sides of potato salad and fried okra. Dessert was banana pudding.  Yup, no doubt, I'm in the Heart of Texas!

The weather here has been all over the place.  From hot and humid to high 30's, windy, cold and raining.  Today is the latter.  When the highs in Houston in April are the high 50's, low 60's, that is considered cold.  It makes me realize how predictable the weather is in San Miguel - usually sunny.

All kinds of fun and interesting things coming up in the next week.  Who knows what I'll have to tell you this time next week?

Oh such fun! Now you've made me hungry for banana pudding. I've not had it in ages - I'm going to have to make one soon. Love the fabric, btw! Perfect.

Well, a nice day of retail therapy capped with some yummy BBQ. It's a fun time to spend with your SIL. Just curious, how are your knees keeping up after the treatment? Shelagh will most likely go for new knees soon, or shots at least, she has a very hard time now... Have fun Barbara, we miss you.

I have never had banana pudding but now I want it! Have fun NOB!

Barbara and Croft Banana pudding is so delicious. I don't make it in San Miguel because we don't have vanilla wafers in SMA. A key ingredient! I might try to substitute something else some day.

Peter, my knees are doing great unless I walk a lot on concrete (like in the stores).
Now, if I can get my back calmed down too, all will be well. I'm astounded that my knees are still doing so well.........

Yes! You can get Vanilla Wafers at Mini Mart (or whatever they're calling themselves now) at their new location on Cinco de Mayo. I just bought a box a few weeks ago for the sole purpose of making Banana Pudding. I have the pudding mix (Jello brand - brought from the states recently by friends for just this purpose - and yes, I could make pudding from scratch but why?). A good friend's birthday is coming up in a week and I'm going to make Banana Pudding instead of a cake. I'm Southern and grew up eating this. SO good!! I can't wait to have it again! Wish you were here and we'd share it!

So happy to hear you're knees are doing well!

Thanks Barbara for the info about the store on Cinco de Mayo. I'm in there often but have not noticed the vanilla wafers. I sure have found a lot of other things, like grits, Wheat Thins, etc etc etc. The girl in there is so nice.........

CU when i get back!