Sometime this summer, the Mama feral cat who wandered through my garden for over a year from time to time had three babies.  Two black and white along with one grey tabby.  Sweet.

She hid them under the huge aloe vera  at the back of the garden.  It is much taller then I and has thorns that could cause severe damage.

Hence, I did not attempt to retrieve them so they would not be feral.  I waited for the mama to bring them out to me.  Well, she did not exactly do that.  Common sense told me I did not want FOUR cats anyway,  therefore I did not feed them.  I called the animal shelter to see if they could help me catch them and the bottom line was no.

Now, before you get upset with me, I also knew that there were enough locusts and varmints on the edge of the canyon and in the canyon to feed a herd.  Add to that all the garbage that is strewn daily in the fenced in area of the primary school daily........

But, at some point, recently, I began feeding them with the thought that I could catch one or two and have them fixed and, if like Velcro the Cat, would no longer be feral, but would turn into lap cats.
I have failed in the last two months at that endeavor.

However, week before last I returned Scout the Dog to his rightful owner,k my son and grandchildren on a Thursday afternoon. Whew.  No pets.

Au contraire, while I was over visiting with the people in the guest house, ALL the cats came in the house, looked around and were about to leave when I returned home.  Oops.  There was the Mama
and only two of the kids - the grey tabby and one of the black and white ones.

The one STILL in the house, hiding, is the black and white one that has been following me around.

When I go up on the roof terrace, she climbs the tree and sits up there watching me.  She is an
acrobat and loves to zoom up the tree by the bird bath.  She is the one with the most personality.
One, I thought, I would love to have for a pet. 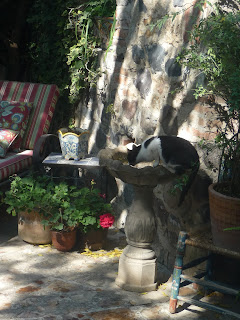 That is, until I tried for two days to catch her inside the house to put her outside!  "Hide and seek"
took on a whole new meaning.  She "hid" and I was "seeking".

It was hard to believe that there are so many hiding places, even in one room.  The living room.
She would get behind the sectional sofa and with my cane, I would try to herd her out.  Then she would run somewhere else before I could catch her.

At one point, I thought she had gone out since I was leaving the door by the kitchen open near her food bowl.  But, she left me a "gift" which told me that she indeed was still in the house.

The night before I finally did get her out of the house, I heard crashing and banging and all kinds of  commotion.  With all the windows, she was seeing her brother and sister and mama outside.  She was running at the door and window trying to get out.  BUT when she saw me, she would run and hide.
It was aggravating.

Voila!  After almost 48 hours, she was outside.  Yippee.  All the time she was IN the house, her family never left.  They were in the garden, where they could see the windows and her.  Very interesting............

Needless to say, I do not want a replay of this again.  Now I'm very, very careful to close that door behind me.  She is always sitting there when I go out. I don't have a cage to catch her.  After seeing her with her whole family, the conundrum is..........."Do I keep feeding them or catch one or two or what?"

Here is a photo of her yesterday when I was downstairs in my bedroom and she came down to see if I was there.  Isn't she beautiful? 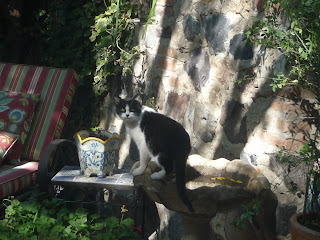 Life is ALWAYS an adventure!

She looks a lot like my late cat, Jason Walker, who I memorialized here: https://gringosuelto.wordpress.com/2013/09/04/in-memoriam-jason-walker/ Jason was also a formerly feral cat who, with his sister, showed up on my porch and was grabbed as a kitten.

Your kitty also looks like she's getting very close to the point of no return with regard to being tamed. I have found that playing with feral cats using a feather on a string is a GREAT way to tame them. I don't know why it works, but it's the best thing for making wild cats tame. You could probably do this while sitting in a chaise lounge in your yard.

Kim G
Redding, CA
Where we have a new-ish cat who's a nice addition to the family.

Thanks for the suggestion, Kim. She does stay near by but still hisses at me which I find hilarious....it is a half-hearted hiss. She truly has a great personality. We'll see what happens.....

I love this story... it illustrates that it's best to just wait and see... one of these scenarios will probably play out:
1. One or all fhe four cats will decide to trust you and become your lap cat/s.
2. They will contiue to carry on as is - after all they have food, a convenient aloe vera plant to hide under, and they are free to come and go as they please.
3. The kittens will mature and find mates... and you'll have more than four kitties roaming through your garden
As you say, whatever pans out... life is ALWAYS an adventure.
Happy New Year Barbara!

You, of course, will keep one of these cats, maybe all four of them, and have them neutered/spayed. Yes, you will. Just buy some cat food, put it in bowl somewhere in the yard, and wait for them to become your BKF, or Best Kitty Friends.

I say keep feeding them outside so they don’t leave to get hurt outside the wall and like Kim suggested play with them. It helps to domesticate them. My sister in law is the feral cat lady of Hattiesburg. She traps and spays cats at the University of Southern Mississippi and the Country Club. Looks like you are getting close to having a kitty with the cute black and white kitty shown. Sure miss your tales of Velcro.

Al, I wish I could catch ALL the cats to have them neutered and spayed. I don't have a cage or it would already have had it done. When I called the SPA they said they don't loan trap cages, sadly.

Jan, my daughter used to trap and spay cats in Houston near downtown. I miss the tales of Velcro too....she was a very unique cat

Charlie Tuna was a great solution. I downsized from a home back to an apartment just over a year ago. A home is just not worth it for me anymore as an older single guy with no children. One of the sad things to see are stray/feral cats, which one does not normally see when living in a home. Some cat lovers will feed them on occasion, even if they do put the food in hallways or real close to the apartments which could also attract mice and bugs. But few will go to the effort to catch and have them/spayed or neutered as you have said you would if you could. So BRAVO for you for the thought anyway.

Scott, I have tried to find a trapping cage, or whatever you call them here in SMA. So far no luck. If and when it happens, I'll put more tuna inside the cage and then have the cats spayed/neutered for sure. Luckily I have the big yard here and can put food out daily for the cats. They are a good deterrent to the possums that I seemed to be plagued with last year....... Are you living in Ajijic?

Babs, No I'm living in Fort Worth. Just enjoy reading expat blogs from Mexico. Had considered potentially moving there but with increasing breathing issues, long term in the higher altitudes would be difficult, as I wouldn't want to live on a coast.

Aha, Scott! I really like Fort Worth. Back "in the day", I did quite a bit of design work downtown in Ft Worth. I like the laid back vibe that was there.....and somewhere in Ft. Worth I redesigned and refurbished the exteriors of many apartments.

Fun times! My niece and her husband just moved to Ft. Worth with a brand new baby girl and a little boy who is three. They are looking forward to getting to know the town and the people.

Hang in there - sorry to hear that you have breathing issues..bummer.