A LITTLE of this and a WHOLE LOT of that!

Yes, I realize it has been twenty days since I last posted, but to say it has been a whirlwind, would be an understatement.  More like a hurricane of activities!

I now have my desktop computer back but cannot use Yahoo.....so I'm writing on the laptop still.
When I tried to go on Yahoo, it was in Russian.  I worried about that all night as the hack from
Wanna Cry was from Russia, I think.  The computer guy will be here next week to figure out
how to get that off and how to get me back on US. Yahoo.  They would not take my password
as they said there had been unusual activity.  Sheesh.

Add to that the construction of the Plaza right outside my house, down the hill, where they have
removed three fourths of the cliff, is going on in earnest.  They brought the BIG machinery in a
few weeks ago. 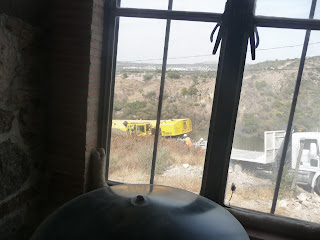 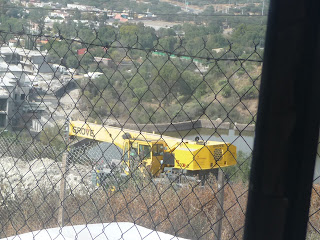 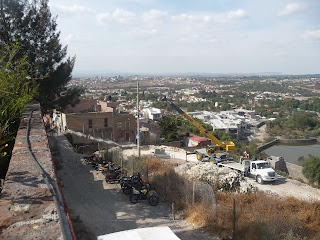 The crane is humongous and lifts huge slabs of concrete into the hole that they dug to China!  The truck that brings all the concrete and the crane is so wide, that none of us can park our cars in front of our houses at present.  It makes a large sound, LOUD to let one know it is coming.  They come and go daily.  It is quite a production.

I wish I could see a rendering of the new Plaza so I would understand all that is going on........
Eventually, we'll all know.  When, is as good a guess as any.

During all this has been cookie baking time, decorating the house, a little and having Christmas. 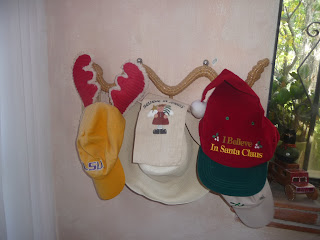 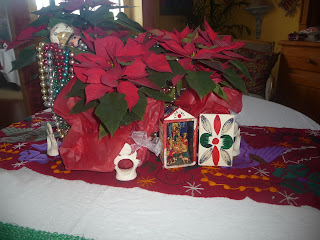 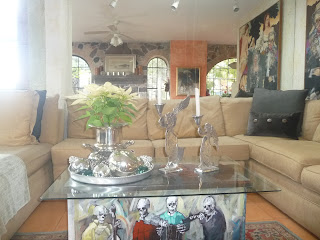 Very little decorating this year.  There are Nativity scenes all over, but I did not photograph them.  Almost all Christmas cookie baking and Christmas itself happened at my son's new home..........YEAH. 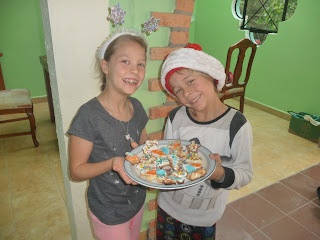 What fun Mati and Seb and I had baking cookies.  No mixer, so we improvised.  The frosting in the bag was hard as a rock so we put it in the microwave to soften it.  And then, of course, we only had two cookie cutters, a star and a heart.  That's okay, the kids and I had fun.  And the laughter at the orange and turquoise sprinkles made me realize that nothing has to EVER be the same.  I don't think there was a red or green iced cookie in there! 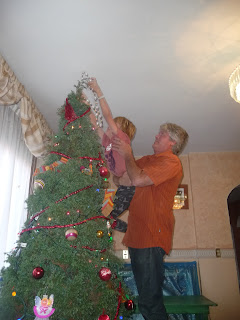 The tree went up on Christmas Eve...........the LAST tree left at the mercado!  Whew.  Here, John and Seb are trying, desperately, to get the star up on the very top.  They are on a ladder and I am holding my breath.  That star is from my first Christmas as a married woman so it is ancient.  Fifty seven years ago!  It is time to replace it with a lighted pretty star.  We all agreed. 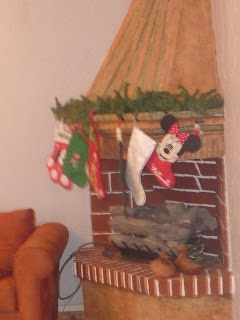 Stockings were duck taped to the concrete mantel............hilarious. 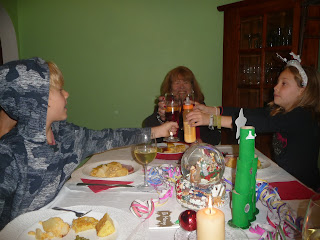 And, we toasted each other with pomegranate juice for the kids, a baby bottle for Mati's doll and white wine for the adults.  It had been a few days of cooking for me to provide our first Christmas
Eve dinner.  Baked ham, au gratin potatoes, English peas, corn souffle, corn bread, and cookies among other things.  Yes, all was cooked in my toaster oven with the exception of the ham which
was cooked in John's oven with a glaze of dijon mustard and orange marmalade.  Very, very tasty! 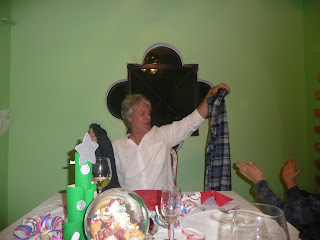 Another new tradition was opening one gift after dinner.  Sebastian is clapping because his Dad
got new flannel pajamas. 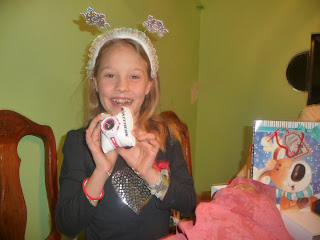 Matilda got a Sketcher watch! 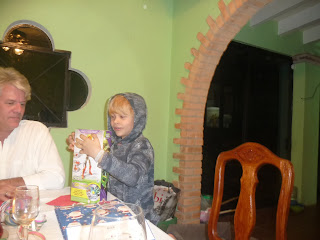 And, Sebastian got a Max Steele character with all kinds of accessories..ALL were happy. 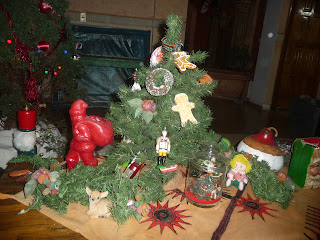 Here's a few of the old Christmas decorations from past years that came from Texas. 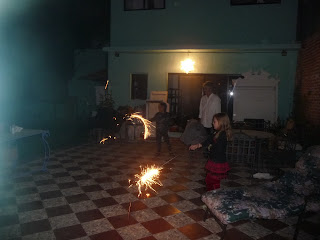 Sparklers outside with Dad helped to bring the evening to an end........ 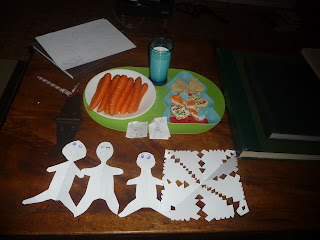 And, Santa and the reindeers had a veritable feast.  A carrot for each reindeer, milk and six
decorated cookies for Santa.  The first thing the children did when they came down Christmas morning was to make sure the carrots had been eaten along with the cookies.  Along with the food, there were many notes and decorations for Santa made my Mati and Seb! 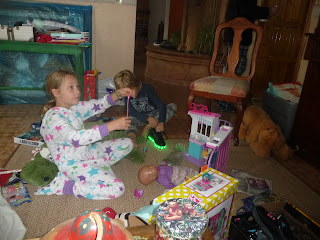 Christmas gift opening was full of squeals of delight and laughter and happiness.  In this photo you can see some of it all.  The kids got these "wheelie" shoes that were amazing.  One of their favorite things.  Books was another thing they were happy about.  Just a great morning followed by ham and eggs and bagels along with LOTS of coffee for the adults.

That was a wrap!  In the midst of all of this, on the day that we baked cookies, Scout, the dog got out and had taken off on a little side trip.  Oh my, that was stressful.  Street by street we drove,  no Scout.  I figured someone had taken him in.  Sure enough, a lovely lady named Ana had and on Christmas Day afternoon, Scout and John along with the children, were reunited.  A happy, happy ending!

By then I was home and recuperating from three non-stop days.  Yes, indeed, I admit I was ready to do nothing.....Period!

On to the next adventure!  I know there will be one because life around here is NEVER dull.

Hope your holidays were happy, joyful and that you are looking forward to 2018, as I am

Looks like you had a wonderful Christmas! I hope that all your adventures in the New Year are happy ones!

Happy new year to you Barbara. We enjoyed a wonderful Christmas here on Vancouver Island with #2 son Chris. Are you getting ready for two months on the coast? Greetings to all the wonderful people we met in San Miguel.

Thanks Bill! Not even 30 minutes after I posted the blog yesterday, I had a flat tire because of a pothole on the street I take down the hill! I chuckled to myself......that was NOT the kind of adventure that I was thinking about to end the year.......ha

Hi Peter and Shelagh. I'm glad ya'll had a great Christmas with #2 son!

Hopefully I'm heading west to the beach but it is up in the air right now.
My tenants left quite abruptly....long story......and so now I need to lease
the guest house again before I can leave. It's always something!
Wish ya'll were closer............Happy New year. There are very few
people in town right now. We only had 6 of us for lunch yesterday.

Sounds like you had a wonderful Christmas. The comment about the "duck" taped stockings made me laugh out loud.

May 2018 bring joy and many blessings to you and your family.

Kim G
Redding, CA
Where for Christmas a duck made the ultimate sacrifice.

Hi Kim. New Year greetings to you as well.

Some day I'll tell you my duck story when my
husband attempted 54 years ago to fix it for
Christmas Dinner. Hilarious.

I'm enjoying writing again.......now that I have
some time.