Smoked n Low is the Way to Go!

Today is a blustery, chilly, cloudy and windy day.  Just like the weather was last Wednesday when I made a beeline out the Delores Hwy to check out the new BBQ  joint.

Don Day had written about it the previous week but by the time I read the article on his blog (which is the string of blogs down the right side of Babsblog), the place was not open.  It IS open Wednesday through Saturday however.  I was taking no chances and headed out the first day that I could get there
to taste brisket, ribs and good sides.

When I say it was blustery and chilly, I am understating it.  By the time I left, it was raining! That's okay as I had requested an order of ribs to take home for my family.  Therefore there was a chance later to savor one or two with sides made at home.

Luckily in the comments on Don Day's blog, a reader had said that it was hard to turn immediately in front of the food truck as there was a deep lip to the road and to go down to La Burger, the next door neighbor to Smoked n Low BBQ, and turn left there and then drive on the shoulder to Smoked n Low. 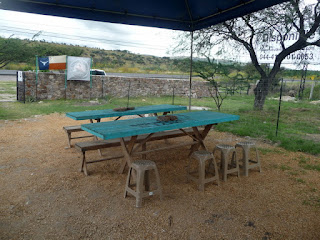 As you enter the lot surrounded by a stone wall and lots of flags, one is greeted not only by the sight
of many picnic tables just waiting for customers but the gosh darnedest big smoker that I've seen in a long time.  Woo hoo, this was going to be good. 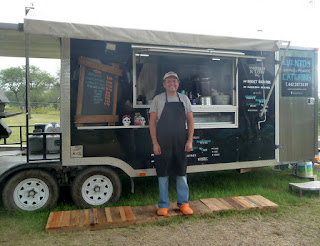 It had been waaaaay too long since I had had good barbeque - four months to be exact - when I was last in Houston!  BBQ is king there and I love having not only the BBQ but the sides.

The last time I had had good BBQ in San Miguel was when Longhorn on Ancha de San Antonio was open.  It was a great place to hang out, have a great brisket sandwich with potato salad and beans and chat with friends.  There was always someone there that I knew.

For one, it was Keith Thompson, who I had met when he first landed in SMA and had a hotel and restaurant.  We had/have mutual friends in Houston where he came from, me too.  He ended his hotel and restaurant days and started over with a little place in a parking lot that eventually morphed into a brick and mortar place called Longhorn.  All of us Texans and others were happy to have a casual place to drop into for every day good food.

It has been a loss that many talk about to this day, when Longhorn no longer was serving the BBQ
of Keith's touch.

Well, guess what?  Diego Bautista is the owner and entrepreneur of Smoked n Low BBQ but Keith was sitting at one of the tables.  He told me he counsels and suggests things to Diego about what expats want in their BBQ.  It's a match made in heaven.

The tricked out Food Truck is quite a piece of work as you can see in the photo above of Diego.  What a nice young man who seems to love what he is doing.  He has grand plans.  He also is offering catering and special event catering.   We chatted for quite a while. 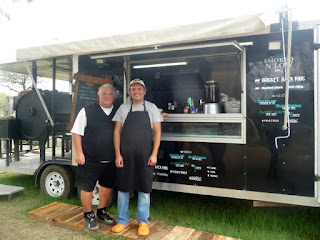 Finally, I could wait no longer and ordered the plate of brisket and ribs with two sides.  Nope they did not have beans or potato salad, so I selected mac and cheese and coleslaw.  The short ribs were meaty and good.  The brisket was not enough, but that will be remedied next time with a request for more then one small slice!  Good flavor and very tender.  There was no sauce on either the ribs or brisket so I could determine that they were tender and flavorful.

Sorry, but the sides left a lot to be desired.  Hopefully, hopefully, they will add potato salad and beans to their sides.  Others have agreed.  Not enough choice in the sides.

But, it is a relatively new operation and there is always a learning curve.  Having designed and built restaurants (well over 100 of them) in the twenty years that I had my firm, I know that you can never judge a food service operation by one visit, especially when they have not been opened for long.

I'm looking forward to going back out in a few weeks when the weatherman says it will be a warm, sunny day to eat outside, and I'll check it all out again............

In the meantime, here is some info you might want to have.  Telephone 442 247-2489.  They are on Facebook at smokednlow and they even have a website.  www.smokednlow.com.  They are at KM 7.4 on the way to Delores.

I love rib tips, baby backs, spareribs. On the grill in the oven, don't matter.
In the winter I do spareribs boiled in a pot with sourkraut and potatoes.

If he puts a smoky chipotle pepper in his beans, you'll love it.

I too love ribs, any kind and cooked anyway.
I have never put spareribs in a pot with potatoes
and sauerkraut. But, I bet my Dad did when he was
alive. He Loved Sauerkraut with everything and I remember
the smell, all day, of when he was cooking it.

I make my beans from scratch, but have never thought to put chipotle
pepper in! Will try that next time.

Hah! Now I know why I wasn't getting your posts regularly: I wasn't officially registered as a "follower". Now I am. We'll be travelling for a couple of weeks but will check that BBQ discovery you made. I may call you to review the directions. I may even invite you, eh?

Aha, glad you're here now Al. Good gosh the last time I saw you, you were going to Iceland or some place that was cold........Now where?

Invite me...when ya'll go. Hopefully it will have improved.

BTW, I read your blog about bike riding.........part of your issue might be that you are now at an altitude much higher then Chicago!

Sorry you're leaving again. i was hoping to drive out that way to see if there are fields of cosmos..........

You better start traveling more with all your money. Use it or lose it!

No sauce, eh? Kind of like the Kruez Market in Lockhart, TX. "No forks. No sauce. No kidding". If the meat is seasoned properly there isn't really a need for sauce.

Personally I can do without most potato salads unless it is a German style with no mayonnaise. Slaw as well. Too many are way too sweet and drowned in mayo/mustard. Gloppy messes.

Yup, Scott, no sauce but also not a real smoky flavor in the meat which I like.
Being of German heritage, everyone asks for and seems to love my potato salad...
I probably only get to eat it once or twice a year now. Cole slaw is seldom that good here.

I'm driving up to Texas mid-November and will probably take Hwy 59 from Laredo so I can stop in some old BBQ joints! Will hope to get to the Hill Country while up there for some good German food.......

I wonder what wood they use down there for the smoke and heat. You are probably used to oak or mesquite which may not be available. Nonetheless, keeping people in the brisket & rib business would be good for all of you down there. You can always introduce them to good BBQ methods over time.

Have a great trip through the the Hill Country!