IF you want to know the REAL TRUTH, Listen to a Seven Year Old! 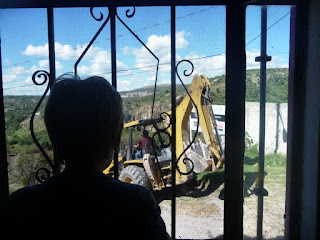 If you ever want a straight answer and a reality check, have a grandchild spend the night!  It is always astonishing to me the insight that little kids have into life and everyday incidents.

On the earthquakes - "That's why I'm going to be a scientist, so I can understand when those things
are going to happen before they do.
On the hurricanes - "Ditto"
On the massacre in Las Vegas - "That man was really angry, really sad and really lonely"
On the bulldozer outside the dining room window, desecrating the hillside, and the old cactus that
must be at least fifty years old, "That should be against the law". 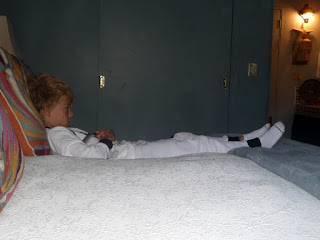 We discussed a lot of things in the time Sebastian was here.  He ate and ate and ate.  I cooked and cooked and cooked.  WHERE in the world does a little guy like him put that much food?  Although
I must admit, while he was watching cartoons on Saturday morning, I took this photo and realized his
legs ARE getting much longer. 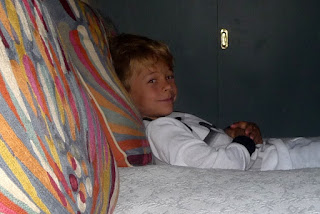 The weekend was a triumph for him.  He beat me twice at the card game "Go Fish".  He demonstrated to me that he can hit a ball just as good left handed as right handed. At the same time he told me that that means he is a switch hitter.   We played an awkward game of tennis with a shuttlecock in the garden until we lost the shuttlecock.  He said he was using geometry, so help me, to find it.  He did.

One of the other fun things for both of us was looking at family photos that he had never seen.

Photos of his dad saving dolphins when he worked with US Parks and Wildlife; photos of many family Christmases in Houston before he was born; photos of cousins as babies and photos of he
and Matilda as babies.  His exclamations and questions were a delight.  The most excited he got
was when I showed him a photo of a family reunion at my brother's 70th birthday in 2003 when lots of cousins came from all over.  Seb was thrilled to know he has LOTS of cousins even though he has not met many of them.

It is a treat to see things through the eyes of children.  There is no filter.  Like when Seb exclaimed that his Uncle Rich had hair and dark hair at that!  Or a photo of me probably thirty years ago and he exclaimed about how young I was............I chuckle now just thinking about it.

As we went to sleep on Friday night, he was talking about all the family and about the fact that he is going to grow up to be a scientist............then there was no more talking.  I knew he was asleep and I also knew that he was still holding my hand.  Ahhh, the joys of being a Grammy.
Posted by Babs at 2:38 PM


thanks! Joan, I'm always so upbeat and happy when I've been with my grandchildren - and or all seven of them! They ARE the purpose and joy of my life as well as my FAB son and daughter and son-in-law.

I HOPE I live another fifteen years to see Seb and Matilda grown .......and Seb a grown man - a Renaissance man, as you say.

Now there is an intelegent lad! And with a big heart to boot...

We should let the kids run the government for a few days. I think it would turn out better than the loafers that are their now.

Peter, indeed, he is very intelligent and so kind and thoughtful. A special combination


Tancho. I think we would be better off if NO ONE was there rather then those dudes!

So sweet, puts a tear in my eye.