Moving at the "Speed of Light"

For the last week I have wanted to find time to sit down and write about:

0   Hurricane Harvey
0   My family and friends in Houston and Surrounding areas
0   Otis, the dog and Flash, my dog
0   DACA  - The Dreamers
0   Hurricane Irma and, last but not least
0    The earthquake in Chiapas

LIFE IS MOVING TOO FAST! 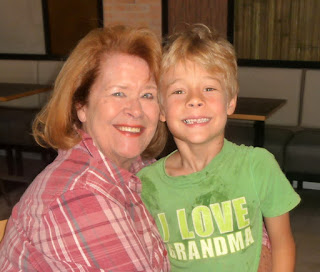 I stopped in Burger King on Thursday to grab something to eat, as I was in a hurry.  Much to my astonishment, about five minutes later, in walked my son and my grandson, Sebastian.  They were as surprised as I was.  LOOK what Sebastian wore to school that day!  It made me so happy and him as
well.  I slowed down and savored the moment.  Truly.  John took the photo.

On all of the topics above, my family in Kingwood and grandson in Clear Lake are fine.  Dry and did not get flooded.  In fact, my daughter, her husband and kids were out helping friends and strangers move furniture, or whatever anyone needed.  They had borrowed a flat bottom boat.  There is a website called "Flooding Kingwood with Kindness".  The stories will make you choke up, I promise.
I do have friends whose homes did flood and most of them have already removed possessions to the curb and cut out the sheetrock.  Texans are hardy people.  "Can't" is not part of their vocabulary!

Otis the Dog lives in Sinton, Texas which is not too far from Corpus Christi, Texas.  www.cnn.com/videos/weather/2017/08/29/otis-dog-hurricane-harvey-viral-picture-ebof.cnn  (I hope this works - if not, just Google Otis the dog!)

It seems that Otis was being kept by the grandfather of the owner.  He had him and his food in a screened in porch and had left the house for a while.  It seems also that Otis got out carrying his big
bag of food around the town.

Since Sinton is a little town and Otis walked the streets from time to time and was known by everyone, a lady saw him, photographed him and posted it on Facebook.  It went viral and Otis
became a star.  Gypsy dogs have a way of doing that!

It made me laugh out loud to see because I used to have similar experiences in the thirteen years that Flash and I lived together.

Flash died here in San Miguel in 2004 and this is only the second time I have been able to write about
her.  She was a character.  A true Gypsy who was always looking for a way to take a trip.........from  Houston, where an old boyfriend gave her to me, to Nassau Bay, back to Houston and then to San Miguel, Flash's shenanigans were the stuff of legends.

In Houston, she was known at every restaurant on Mid Lane and a few on Westheimer that were in close proximity to my house.  She would get out, one way or the other, trot to the corner and WAIT FOR THE LIGHT TO CHANGE and then cross to go to Jack-in-the-Box, an Italian restaurant farther down the street and end up at the car dealership where they fed her everything from ribs to donuts.  Then, a good Samaritan would call to tell me Flash was there and I would go to get her.

When I would arrive, many of the employees would be standing with Flash rubbing her ears or petting her and then helping to get her reluctantly into the car, if I was driving.  Or if I walked, putting her on her leash - which she hated.

One time the phone rang while I was sitting at the drafting table working on a new restaurant project. The person asked if Flash was okay!  It was someone from the car dealership.  I replied in the affirmative  as she was laying by my feet and they said, "We were worried. We have not seen her in at least a month".  I explained that she had now discovered if she went the other way, all the construction workers in the area who were working on building townhouses had food too.  So Flash was trying a new approach.  What a dog.

I could go on and on with her escapades.  Of course each and every time I would worry that something would happen to her.  Then when she would get home I would be so aggravated that I had had to worry.  Well, eventually that caught up with her.

After we moved to San Miguel, she discovered the mercado down the hill.  Plenty of food there.  I've been told she would visit the vendors and the women sitting on their stools selling tunas or whatever.  I'm sure each would give her a pat on her head.  By now Flash was getting old.  One day I drove down to find her and did.  She usually would sit on the curb waiting for me to discover that she had escaped again and come to get her.  This time she did not make it and was hit by a bus on Nunez.
I've never gotten over the loss.  Flash's ashes went to the Blanco River in Wimberley which she loved so much.......I have never even attempted to get another dog.........

I got so upset about the 800,000 undocumented Mexican kids who are now in limbo that I could hardly sleep for two days.  I could write ten blogs about why I feel that way and when I can get my emotions in check to write logically about this horrible injustice, I will.

As I write this Irma has not made landfall in Florida as yet.  All of us who watch the coverage or who check NOAA have a sense of helplessness as Mother Nature bears down and all we bystanders can do is hope that those in the path have used common sense and evacuated early.

We have all seen the devastation so far.  It is a horrible sight.  I'm sending positive energy to all my family and friends in Florida, Georgia, Alabama and Mississippi, who might be in the path.  Irma is only the fourth or fifth hurricane of this magnitude to hit the USA.  Terrifying to think what the destruction is going to be over a twenty-four hour period.

Something that no one expects and really can't be prepared for..........IMHO.  It is astonishing to me that an earthquake 650 miles from Mexico City was felt there.  One can hardly imagine the devastation in Guatemala as the place where the earthquake happened was not that far from Guatemala City.

When I traveled all through Guatemala about ten years ago, I noticed in many, many villages that the roofs of the homes were corrugated tin, not the traditional concrete.  Finally I asked someone and they said it was because so many people were killed in an earthquake, in the 80's I think, from their roofs falling on them and crushing them.  Shocked, I looked at the villages in a different light from then on.  Hopefully there is not great devastation there as there is in Oaxaca and Chiapas.

Hopefully there will be no more strong aftershocks.  If interested, there is a website, Earthquakewatch.com that gives all kinds of information.

That about covers all that has kept me so busy that I could not find time to write.  I did not enumerate all the other things that have been going on as well.  Good grief, I'm exhausted just thinking about it!
Posted by Babs at 1:06 PM

I left CDMX the morning before the earthquake. Alejandro said that it was terrifying... felt very much like the "big one" in 1985. Fortunately damage in the city was minimal. He and his family are fine as is their home. Sadly many in Oaxaca and Chiapas were not as fortunate.

Now I am anxiously following the news about Irma since I have friends in Miami Beach who have not complied with the evacuation orders.

Hi Bill! I wrote a long response yesterday on my laptop and it promptly disappeared as I came to the end of it.......drat. Then the grandkids arrived and just left an hour ago. Hence, my delay in writing.

You and Alejandro were the first people I thought of! I'm so glad to know you both are safe. Pretty scary that the epicenter was 650 miles away and still had that impact on DF! The 1985 earthquake was only 200 miles away, so you can imagine what the result would have been if it had been closer. Yikes!

I too have family and friends in Florida who did not evacuate. I'm hoping they survive. Especially the one in the Keys!

Glad to hear you are well and blogging. We are lucky in San Miguel to be free from danger from most natural disasters. Maybe flooding? As for Flash, let me remind you we have several candidates outside our gate, waiting to be adopted!

Glad to know you have returned from the FAR North to our tranquil San Miguel. I'm afraid to come out to your gate as I'm afraid I would see so many faces to bring home.........maybe soon.