A Month of Independence

On the first of September, without fail, the vendors who sell anything that is red, white and green are on the street corners early that first day to sell all manner of clothing, wigs, but especially banners and flags to celebrate September 16th, Dia de la Independencia. 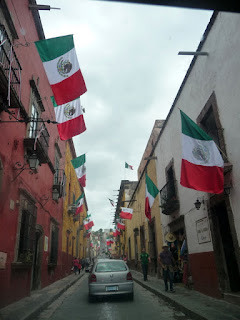 I have not found a street or an area of San Miguel de Allende that is not decorated in some way or other.  I also know that this is the norm all over Mexico.

I was quite surprised when I started coming to Mexico over forty years ago at the patriotism and pride of the people of Mexico.  In my uneducated mind, it seemed to me that US citizens were the most patriotic.  But, now it is apparent that all countries that I have traveled to, but especially Mexico, takes patriotism to a new level.

For instance, on the 4th of July in the USA, we celebrate that day.  In Mexico, it is a month of celebrations.  Believe me.  This past Sunday morning, for some reason that is only known to God and the people out at 3AM, fireworks were set off and then again more at 6AM.  If I were to be so foolish to ask someone, anyone, WHY?  They would say, it is September, the month of Independence.

This week is the lead up to what will happen Friday, Saturday and Sunday.  At 11PM on Friday El Grito will be said from the balcony of the former home of Allende who was part of the 1810 Revolution.

The jardin surrounding the house, which is next to the large church known as the Parroquia, will be packed with people waiting to hear the speech and waiting to yell, "Viva Mexico" at the end.  People come from all over Mexico to be here since this is where some of the Revolution began.

Then on Saturday there is a big, grand parade of all manner of military, civilian and who knows what else, parading.  On Sunday often they repeat the whole thing again for those who missed it the previous day.  It is quite something to experience.  Kinda like being in Times Square in NYC for one of their celebrated parades.  It is a federal holiday - NO work - just enjoyment.

Then as the month goes on there are more parades of indigenous peoples from all over Mexico on the last weekend of the month.  I've also heard that the Running of the Bulls is being resurrected.  Hopefully that is just a rumor.

During all this time, little girls walking to school have red,white, and green ribbons in their hair or bow ties on their uniforms.   Cars and taxis have spread Mexican flags across the hood of their cars and tucked them under the hood to hold them in place.  Some have flags on their car radio antennas.

It IS a month of red, white and green.  A month to reflect on the fact that until the mid 20th century, Mexico was not a democracy.   People were raised to not be innovative or to think for themselves as they worked for the landowners or those who owned the businesses.  I still see that every day here and those people that do not know the history of Mexico perceive the people as not having initiative or the desire to better themselves.  Nothing could be farther from the truth.  But, since they have only had democracy for a little over 100 years, just think about that!  It will give you a different perspective, hopefully.

I have seen immense change in Mexico since the early 1990's.  All for the good.  It has been an honor to witness and to be a part of the change.