NEVER a dull moment in Mexico!

Every morning when I awaken, one of the first things I do is open the drapes from across the wall of windows that look out on the downstairs patio.

Often, believe it or not, there IS a surprise! 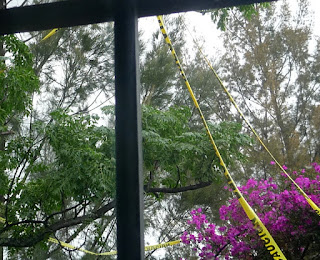 This was what I saw when I looked out one morning.  Construction plastic tape saying "Be careful".
It had been wrapped along the new pathway that had been created for the students.  A wind came up during the night with a storm.  It obviously blew into the trees.  Of course I could not remove it, it was shortly after my accident and with my arm in a sling, it seemed like not something I should do.
Javier came to the rescue, thankfully.  But, I must admit, I did chuckle when I first saw the mess. 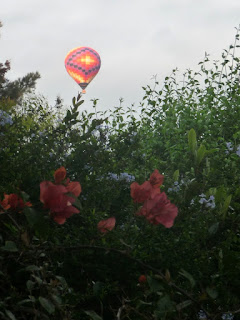 Last week, one early morning, I heard the familiar "whoosh" of the hot air balloons as I opened the drapes.  What a lovely sight to begin the day.  I quickly grabbed the camera to capture this sight. The hot air balloons always cause me to stop and pause in awe.  IF they dip down over the garden, I sometimes go out and wave to the people. 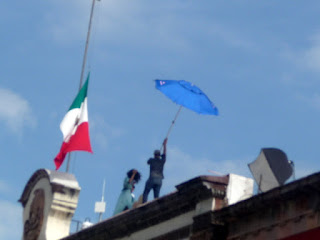 The same day that I saw the hot air balloon, as I arrived for coffee with the group, I looked up to
the roof of the old municipal building and saw this scene!  What it was all about, one can only speculate.  We decided it must be a commercial or video being filmed.  Who knows?  It does
cause one to chuckle though. 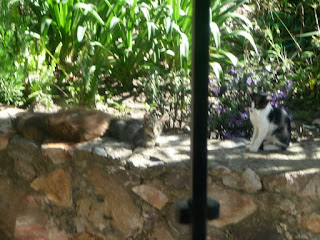 One of the most astonishing and delightful sights in the garden happened last week as well.  As I started to sit down in the chaise in the living room, I looked up and was startled to see baby kittens moving around in the garden.

This saga began quite a while ago.  The mama cat has, from time to time, decided to come through the garden and sleep in a flower pot or scurry through.  One day a few months ago I noticed how emaciated she was as well as the fact that she was very, very pregnant.  So, I began to feed her.

Although I was in Texas for three weeks and no one was here to feed her, I doubted she would still be here when I returned.  She was not for the first few days after I returned, but then one morning she appeared.  I began to feed her again.

Then one morning I thought I heard a faint mewing sound.  I looked all over the garden and decided that if she had had the kittens (it looked as though she had) then she had hidden them in the big aloe vera with huge thorns.  I was not about to attempt to check in there.  I no longer heard the mewing after that day and figured she had moved them down in the canyon or somewhere.

One morning last week, when I opened the drapes, the mama was sitting out in the open by my patio door. Very unusual as she usually hovered under the chaises down there.  As soon as I went upstairs to unlock the door and put food out, there she was, rather close to me.  In the past she would still not
get near me - even after several years.  But, she was getting closer and closer.  Of course I was talking to her and I do believe that she finally realized that she was safe.

Then the next day the photo above was what I saw.  There is a grey tabby and two precious black and white kittens.  Even the grey and white male dad has shown up!  It's a whole family.  They all come down to drink out of the big water bowl that I have on the ground for butterflies.  What a sight!

One of the little black and white ones has a round white circle on its black back.  Yup, now I can open the drapes in the morning and see them scampering around.  Unfortunately they are feral and will not
let me near them.  I see them running around in the plants and trees. The garden is a jungle to them.

What a variety of sights without leaving your casa! I love cats, so I thoroughly enjoyed reading about them!

I hope your arm is healing well.

Have a good week.

Lovely kitties! Perhaps there is an animal rescue group in SMA that could help you trap them to be neutered & vaccinated? Bless you for caring for them

Thanks Deborah. That is my plan. I have to borrow a cat carrier to trap them so I can do just that.

A few days before your splendid day we, too, had one here in SMA. I thought I might share, so I posted about it here:

What a special place is SMA!

Hi Ray - Thanks so much for sharing your experiences on your website! How lovely to see your involvement in the community. Great photos and memorable fun.