Five for five.  That's how many grandchildren are in Texas - four in Houston and the oldest, Jessica is in Austin.  Austin is about 2 1/2 hours from Houston.  My goal - to spend time with ALL of them.

Not only did I succeed in spending time with all five, I even got to spend time with other relatives like my brother, sister-in-law, nephew, niece and their mates and their children!  Woo hoo.

Since Memorial Day was one of the days while I was up there, I spent it with the above mentioned
as we had the traditional meal of the day.  Hamburgers, potato salad and all the trimmings.  Yum.

Here are a few pictures of the fun and frivolity. 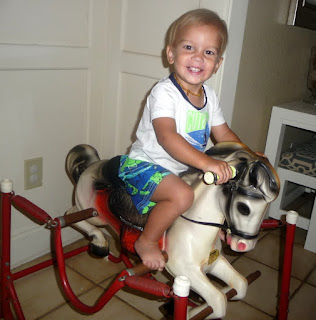 Last time that I saw Grey, he was a tiny baby.  In one year he has gotten a personality and a precious smile. 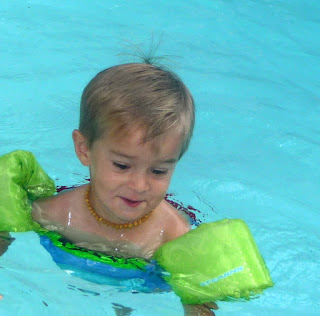 Austin is amazing.  At three, he is articulate, smart and adorable.  We had great conversations! 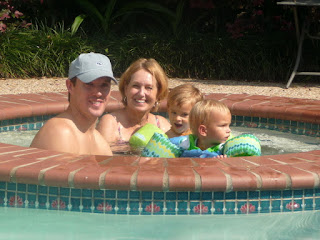 Here is Ryan with his two children and my sister-in-law Annette. Grey and Austin will have a new baby brother or sister later in the Fall.

This photo makes me laugh.  The expression on Grey's face says he is not very happy.  My brother, Bill, is in this photo too.  As you can see, the hot tub was a hit that day.  It was still in the mid 80's at this time, so the pool water was too cool for the kids.  The hot tub was perfect.

One evening Annette and I sat in there for almost three hours just talking. We were astonished when we checked the time to see that we had enjoyed the evening breeze and the healing waters. 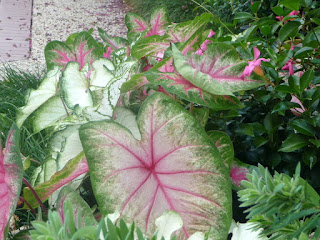 The garden that Annette works so hard to maintain always has flowers blooming.  This year the caladiums, the crepe myrtle trees and even the daylilies were blooming profusely.  Unfortunately,
I did not get photos of my niece, her husband and little boy.  How I missed that, I have no idea.

Then I made a trip to Kingwood, about 45 minutes from my brother's house to see Hannah, Andrew
and Emma along with their Mom and Dad.  Dad was at work, so no photo..........Andrew was busy upstairs, so no photo and Mom did not want a photo.  But how much fun it was to have photos with
Hannah and Emma.  We went to Wendy's for lunch.  We don't have Wendy's in Mexico.  I love their chicken sandwich...........and their Frosty's.

Guess who drove?  Emma!  She has a Nissan Rogue........woo hoo.  What a cute car.  I was having car envy while I was amazed at how carefully and safely Emma drove. 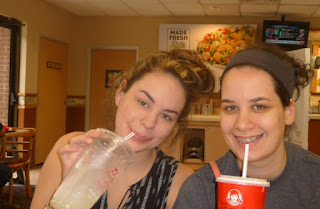 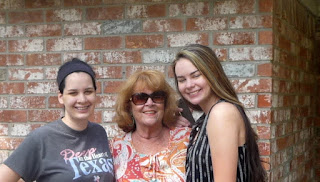 Then we returned to the house and sat around and talked for several hours.  They were all excited as they were heading to Garner State Park the next day for their annual visit.  Do you notice that I am now, officially, the shortest in the family?  How the heck did that happen?

From the 5th of June til the 7th of June, I spent time in Austin with Jessica.  The trip over there was great until I arrived in Austin and the road I had intended to take to her house had never appeared.

I called Jessica, but she had just moved to Austin the previous month and had no idea where I was.

Uh oh.  I got on 35 S and then quickly took the first exit as 35S was a parking lot.  Luck was with me!  I turned right on the first street that I could, as it said, "State Capitol".  And, lo and behold, on my left was a Hertz car rental!  I knew they would have a map.  I parked, walked in and told them
I was lost.  They were extremely helpful.  One of the men took the address that I had to get to, put it in his computer and printed out specific directions to get me to my destination.  I couldn't thank him
enough.  I would never have gotten there.  My plan had been to sit by the State Capitol until Jessica could find me..............Now that was not necessary~!

I got to the beautiful place that she lives with no problems.  When I called to tell her that I was there, the amazement in her voice made us both laugh.  We had so much fun together.  Dinner at Chuy's followed by breakfast the next day at a true Austin hippie breakfast place and then barbeque that night at Rudy's.  We also did a little shopping, but mostly we talked and shared what had happened in our lives for the last year and her plans for the future.  What a fabulous person she is........ I hated to leave. 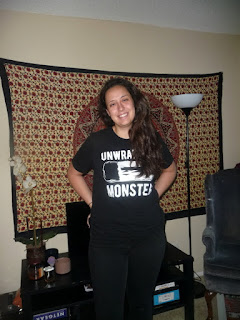 The drive back from Austin was much smoother as Jess wrote out the directions for me, very specifically, and Hwy 71 is so much better then 290.  I'll definitely remember that next time.

I wanted to share a wonderful photo taken of us at Chuy's that Jess sent to me on her I-phone but for some reason I can't get it to download or anything.  I'll need to ask the Computer Guru............I've tried and tried every which way to get it so I can print it, but alas, at the present time it is no go.

The wrap up is the two times that I saw Christopher.  His graduation and the little celebration we had
in Kemah at the Flying Dutchman restaurant.  Then all the different times I saw little ones at my brothers. The surprise visit when my two nieces drove from Shreveport to see me.  My time with Jessica in Austin and then the short time, but sweet time with Hannah and Emma and Andrew briefly.

You are blessed with a beautiful family.

Peter, indeed. They certainly add joy to my life.

Babs, your love of life comes through in every post! Thanks for sharing your joi de vivre.