At the end of last year I mentioned that the city had decided to turn the cliff outside my house into a park/plaza.  Since there is an immediate drop off,  it seemed impossible to me.  But in the ensuing months there have been backhoes, bulldozers and many dump trucks hauling off half of the hillside in order to create a level space to expand what will be this park.  Truly astonishing.

Now I have never seen the plans and  have no idea what it will look like or, for that matter, when it will be finished.  Hopefully in my life time as now there are only two guys doing all the work!

Unfortunately, the city when deciding to do this did not take into account the parents at the kindergarten or the primary school who bring their cars or walk their children up or down the hill to school.

It has been very dangerous as little by little the space they have allowed for cars to drive on the road has gotten smaller and smaller.  Now, also, there is no place for the parents to park to go into the school when necessary. Obviously due diligence or research was not part of this glorification plan.

Practicality would have said, it works the way it is and let's not mess it up for something that will give little benefit on a daily basis.

However, yesterday I received a lesson in compassion, empathy and patience.

One of the women who works at the school was out at the top of the hill, very close to my dining room window.  When I saw her, I wondered what she was going to do.  The previous day two workers had put up additional poles to make the driving space even narrower.

About an hour or two later I looked out the living room window to see if she was still out there as I could not imagine what she was doing. She had a rake and a bucket  She was carefully, slowly, and meticulously raking all the larger stones and rocks out of the space that is meant for the children and parents to use as a walk way. 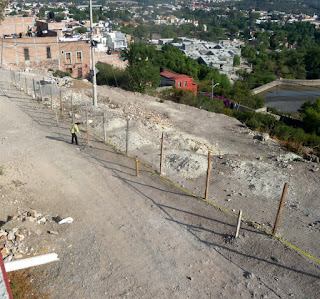 Of course, no child or parent walks single file, which is what this space will require.  They all usually walk holding their parent,s hand.  Or the group skips down the hill together, talking and laughing.

But, the fact that this woman took the time to clear this pathway of any walking hazards for the little children really touched my heart.  It is just one of a zillion thoughtful and kind things that I observe in my life here in Mexico.

We used to watch so many people stop and look out over the pressa, one night a pickup truck stopped and whole family got out and enjoyed their dinner with your amazing view. One day it will be finished,it would be nice to see the plans though. Cheers

Indeed Shelagh, people used to love to walk up to the edge and stand in awe of the beauty of nature. It now is not possible to do so.........disappointing to me to see people unable to do so. Hopefully the park will be finished soon, but, I'm not holding my breath as you know things here are very slow.