It would seem that since the trip to Texas is at about the same time each year with the mission to see family, friends and enjoy delicious food, that it would be a rather non-adventurous event.  Au contraire.  Every year it is anything but dull.

Just as I am trying to write this, it is an adventure, as the computer is not allowing me to put this sentence into a new paragraph.  Aargh.  I'm still having problems from when the encryption nightmare happened over a month ago, so bear with me.

I tried to write this blog yesterday on the laptop and three quarters of the way through, it all deleted.  Maybe it is writer's error and not the computer............ha.

Back to my adventure in Texas.  It was a frenzy of family, friends and dining out on all kinds of good food.

I managed to see all five GRAND kids, my brother and sister-in-law and my daughter and son-in-law.  In the midst of the trip, a great surprise happened when my two nieces, one from Shreveport and another from Florida, drove to Houston to see me.  How delightful it was to see them as it had been thirteen years.   Nice surprise.

One of my main reasons for heading up and staying a little later then usual was to be there for my grandson's high school graduation.  He is the son of my daughter Jennifer.  We got to spend time together and it was encouraging to hear what his plans are for the near future.  Kids today are so
smart! 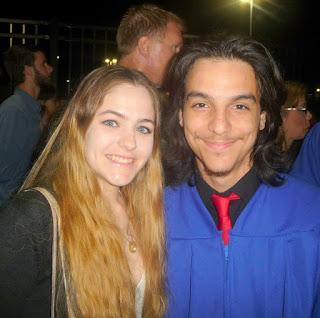 Here is Christopher with his long time girlfriend Kayla.  A sweet, lovely young lady.  Graduation was out of doors and wouldn't you know, there was a minor monsoon that day which made it seem that there would be no outdoor graduation, but, it cleared, the sky was so clear that the stars and moon were beautiful.  The cool breeze added to the enjoyment of watching five hundred plus kids file up to get their diplomas.  Of course I was all choked up to see my grandson walk up to get his diploma and wishing that his Mom could be there to witness this auspicious event...........but, maybe she was  - in spirit.

Then we got together another time, about a week later to celebrate his graduation. 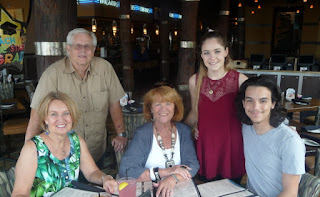 We met at the Flying Dutchman restaurant in Kemah, on the water, to hear all about his future plans.  My sister-in-law, Annette and brother Bill, were with me.  It was a fun time.

There were many highlights in this trip, this was one of them.  Much, much more to share in the next few days.  It will take several posts for this three week saga.

I'm back home in San Miguel.  There is no place like home even though I was well taken care of in each place that I laid my head from Houston to Omega Bay to Seabrook to Austin and back to Houston.  Whew!  It was a journey.

Glad that you had such a wonderful trip!

A typing tip for the future. If your text disappears, before you do anything else, press Ctrl Z. 99% of the time, your text will re-appear. Those two keystrokes have saved me many a frustrating evening. I then get frustrated with something else.

Thanks Bill - it WAS great!

Steve, I need all the help I can get with these two computers..........I SO hope you come to visit in August and can help me with this mess. No one has ever told me
Ctrl Z! I will certainly try it. It IS very frustrating and takes all the fun out of writing........Thanks for the Welcome HOme.

Steve is correct. Ctrl-Z is the great UNDO. When having trouble getting to a new paragraph try Ctrl-Enter. As for the ransomware issue you had, I'm not so sure it would be causing any of your current troubles. However, it never hurts to run a full virus scan followed by a clean-up program such as CCleaner.

Glad you had a good trip! Sorry 'bout the monsoon. As long as there is no flooding, this time of year in Texas it's usually good to be getting some rain.

Steve, Indeed, you know the frustration. Usually it only happens on the laptop so I was surprised when the whole thing disappeared on the desktop the other day..........
I have written down your suggestion for the next time.

Scott - Thanks for taking time to share your suggestions as well. Wish you and Steve were nearby. One of you could probably give me a good tutorial! Thankfully when I had the problems with the laptop going as slow as molasses, my brother who is a wizard with computers, found that there was an AVG program running continuously on the laptop and he cleared that up.

It is so frustrating to not know how to fix these things! Your help is greatly appreciated.