I've always known there are pathways from house to house under the streets of San Miguel near the jardin and in centro.  They were built back in the 1700's.  I've never been down in any of the pathways as I am
prone to claustrophobia. I presume they were used for safety.

But, things ARE happening here, during new construction that is raising eyebrows and consternation from those who do not like change.

Coppel, a prolifice department store in Mexico,  a few years ago announced they were building a new store that is near the Instituto.  There was a hue and cry that it would close mom and pop stores, it was not historically significant, it would cause us to lose our historical designation, etc etc etc.  There were pickets and signs and protests.  All the usual stuff that happens each time someone wants to open something new here.  It's been going on for all 15 years that I have been here.  These people made it so miserable for Subway, that they finally left town! So did a McDonald's franchisee.  There are over 500 Subways in Mexico, but not in San Miguel.

Anyway, Coppel opened several months ago and finally last weekend, I went in the store with my son John and Matilda and Sebastian to look at bicycles.

I was very impressed at what was just on the first floor!  I didn't get up to the second floor, yet.  Clean, efficient, well marked displays.  Plenty of staff to assist or to stand in amazement as Mati and Seb tried out the bicycles.  What I didn't know at the time was that there is an underground parking garage.

A few days later, I returned to Coppel with friends.  We pulled into the underground parking lot.  Small but efficient for about 15 cars.  It has a vestibule and even an elevator!  My kind of store.  In we went, looked again at things and left.  Things that I don't see in any Mom and Pop stores here, anywhere.

Then I realized that the construction that has been going on out on the edge of town next to the Italian Coffee place across from Mega is going to be an underground parking garage as well.  Smart use of space - underground.

What I find amazing is the fact that San Miguel is built on rock.  No wonder it has taken about two years for the structure photographed below to get to this point. 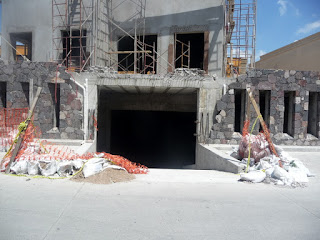 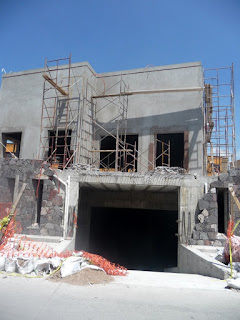 In Queretaro, a city about an hour from here, the parking garage is under the jardin.  It would be wonderful if there was a place for San Miguel to do that to relieve the surface lots that are usually filled to capacity daily.

There are all kinds of ways to make things work more efficiently - if the people will cooperate and accept new things.  Maybe some day.

Not being a fast food fan (read DO NOT EAT ANY AT ALL) from what I have read recently Subway's only claim to fame is the number of outlets they have and continue to open. Apparently they have lost business because their (discontinued) spokesperson is a confessed child molester. Their business was down 3 percent last year - so they are working on modifying image and menu apparently. We have a Coppels in Puerto Escondido - I do not see how it would threaten mom and pops? Their stuff and prices are pretty high-end - but maybe that reflects more in Puerto than SMA.

I am surprised to read that Coppel and the things they sell ( mostly furniture and clothing ) is considered " high-end ". Who knows, maybe in a beach place with a more international clientel they have different things.
Here in the capital one can find Coppel in the more popular areas and every time I see a store, which admittedly is no more than a couple of times a year, I am surprised that they still exist.
I think they do relatively well , because they still have some of the purchasing programs ( like Fonacot and long term lay-away ) that years ago ( before so many people had credit cards ) were common and popular. Many people buy on long term lay-away, or as part of their fringe benefit packets through the government because they have no credit cards, or other means to buy goods they need/want.
I have Fonacot ( as a fringe benefit ) and have immediate cheap credit for certain things, but bought for example my fridge for cash at Viana, because the same model ( nothing special ) was over 1000.- pesos cheaper than at Coppel.
I personally ( and that might just be me ) find that even the two remaining Woolworth stores have a better variety of goods at a better price.
But I agree, what Coppel has imo is high priced, but I would still have to see something I consider high-end. I also don't think they threaten mom & pop stores, because at least here in the capital they sell nothing that is typically sold in small family run places. I just wonder why they went to SMA.

I am also not a fast food fan and never have eaten at a chain ( I come from a cook & eat at home culture and enjoy my own food ) and therefore possibly pay no attention to places like Subway.
Internet results from minutes ago say that there are just under 70 Subways in the Metropolitan Area and that they are about ten less than last year. I can't imagine that their spokes person has something to do with their demise, because it's not been big news here, if it's been any news at all.
I would assume that at least in Mexico those places closed down due to lack of business.

When Soriana and then Bodega Aurrera opened in Pátzcuaro, there were moans of "they'll put the Mom 'n Pop stores out of business."

I have not seen that happen. There are still plenty of tiendas de abarrotes in the barrios. Here, alone, at tiny Las Cuevas, we have at least 4 tiendas. I have to ask how many people are going to drive to a big, chain supermercado to pick up a couple of liters of Coke? Or a couple of onions? They can walk to the abarrotes.

The big stores offer convenience in terms of parking, good lighting and merchandise neatly displayed. The local stores serve their local neighborhoods. Recent history has shown that there's room for both, and we use both.

The real reason for the protestors' fears it that the big chain stores do not jibe with their mental image of sleepy, quaint Mexico.

Hi Calypso. Of all the fast food chains, Subway is the purest as far as serving good food, IMHO> I had never gone there until my daughter was at MDAnderson and one of the oncologists suggested a sandwich that they make (which I don't remember what it was) that I should get for Jennifer. Which, of course, I did. I was surprised. I sincerely doubt there sales last year were impacted by what happened this year with their former spokesperson as he has not been that for a few years.

As far as Coppels, we have had a large store on Insurgentes for as long as I have been in San Miguel, but they wanted another newer store as well. I don't think of it as high end, possibly in the category of a Sears or JC Penney. It was all about historic preservation that started the whole dust up.........nothing has happened further since it opened. Thankfully.

Coppel and Liverpool are now the only two department stores here. They don't impact the mom and pops obviously. Interesting to hear about credit and your card, etc.

See my comment to Calypso about the food. They are all over the highways now when I'm driving back and forth to the border. That is when I have stopped there as one knows the stores are very clean, the food is fresh and one can get a sandwich with fresh sliced veggies or meat in a few minutes and be back on the road.

They seem very busy when I stop from time to time. Now that I won't be driving back and forth to the border anymore, I doubt I"ll eat at a Subway. It was a convenience.

Amen, Don Cuevas, Amen. I remember this happening when I was a child growing up in Alexandria, La. Some company wanted to open a store in that town and there was such an uproar they left. It's nothing new.........I don't understand it, but to each his own, I guess.

You can't stop progress. Most all Mexicans love franchise food and department stores. They want what they see on television. I would bet that the majority that booted Subway and MacDonald's out of SMA were not locals.

In Monterrey we have a Starbuck's (600 in the Republic) and Subway on every corner and the places are packed. Who am I to stop what Mexicans want. It's their country not mine.

I went to the Coppel in SMA when I was there this summer. I thought it was well done and hidden in between the historic buildings. How they got the permit, I don't know. But what I do know is that the store was packed with locals.

The days of local street markets, packing burros with costales and a woman with a baby strapped to her back are coming to a close, maybe not soon but it's slowly becoming a thing of the past. Besides, I ask any reader here, do you want to carry your stuff on a burro and walk along side for the kms from Centro to the other side of the Botanical Garden or carry a bab strapped to your back? I think not. It's called progress.

Let's try to keep what we have but not deny people what they want and need to move ahead with the rest of the world. Mexico is on the move and is part of globalization.

You are SO right, it was not locals that picketed Subway! I agree that the locals like dept stores and franchise food.

I also agree that the facade of this Coppel was modified to blend in with the other buildings and is hardly noticeable.

We still have the burros and the women with the rebozos. I hate to think that that will end, but I suppose it will. I commented the other day that when out on the back roads I used to see oxen in the fields. Now it is green tractors.......Life changes and progresses, everywhere. Thankfully.