The Seasons of His Life 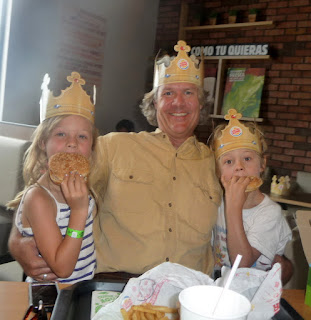 My son John has had an amazing and interesting life.  Now in his early 50's, he says it is the best time ever.

Now that is quite a statement from a man who backpacked through Europe while in college and then at the age of 29 was wise enough to realize that if he was ever going to back pack around most of the world, he better get busy.  He, in fact did that.  Quit his job and was gone for almost three years.

Little did we know then, how important all those adventures would be for him in the next season of his life.

Back in the business world using his degrees in marketing and his passion, wildlife biology, he worked in many parts of the USA.  The beneficiaries of his work and talent were dot com companies still in existence and also Ridley turtles, dolphins and birds.  He's a gentle, caring man.

Fast forward to about eight years ago when John decided to take up where he left off on his world trip.  India was calling.  He came to San Miguel to tell me goodbye, with an airline ticket in his pocket.  Destiny intervened.  Eight years later he is still in San Miguel working to support his beautiful family, Matilda and Sebastian.

Those of you who read the blog frequently have witnessed their life from beginning to now.  It's been a joy.

John has been working at consulting with companies in San Miguel on a full-time basis in marketing their businesses.  Quite successfully, I might add.  Bajiogo and Real de Minas Hotel come to mind, as two of those companies.

Now John has decided to go into real estate.  He is a man who has made many business acquaintances and friends in San Miguel.  It is his hope that these people will be able to benefit from his integrity, honesty and perseverance in finding the best property for each and every person.

John is now with Coldwell Banker Smart after meeting with many agencies and deciding that the people in this firm and its owner were the right combination for him.

If you, or anyone you know has a property to sell or is looking for a property to buy, please send John an
email at John@ColdwellBankerSMART.com  and he will get back with you ASAP.