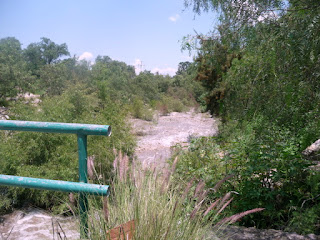 Our "usual" rainy season in San Miguel begins mid June and goes through mid to end of September.
NOT this year.  It started in January or February and has rained off and on.  Highly unusual.  Highly.

By this time of the year we usually have maybe,6 or 8 inches.  NOT this year.  At present, after last
night's storm of all storms, at my house it is close to 25 inches!

About two or three weeks ago, I began to hear the waterfall coming down the canyon wall from the dam above in the Botanical Garden.  The presa (reservoir) has been full to overflowing already.  Highly unusual.
This does not usually happen until mid September or so. 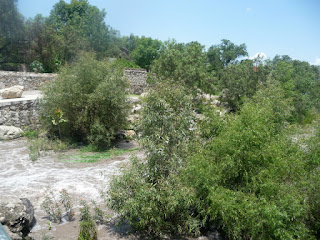 Also highly unusual has been the number of electrical storms with big booms of thunder and lots of lightning.

In one storm last week, it went on for hours.  Last night it was close to two hours of continual lightning and thunder.  It did not end until around midnight.  The thunder had started at about 3:30PM yesterday afternoon!  Highly unusual. 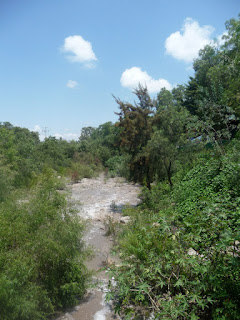 While I was out yesterday, I crossed the bridge at the bottom of the presa and was astonished at the river that is rushing through where it usually is just an arroyo with a bit of water, if any.  As I sit here and write, I can hear the rushing water at my house.......a good eight blocks away.

Locals are beginning to complain.  An avid tennis player said yesterday that he had only played once or twice since April.  Golfers are complaining as well.   However, I'm hoping that the farmers are happy.

The corn crops are outstanding.  So are all the other things grown in this area for export.  The wildflowers are higher then the top of my Pathfinder!  Add to that the birds and butterflies are soaring and flitting and loving the cool fresh air and the flowers that are blooming profusely.

The thing I miss most living here on the west coast near Vancouver is the almost total lack of thunder and lightning storms. In Montreal we had some great ones during the summer. I think I can count one one hand the amount we have had in the last ten or fifteen years!

Maybe with luck there will be some in December, January, and February.
We are at stage three water restrictions now, only hand watering allowed, no filling of pools or spas etc. No watering of lawns etc.
Tinder dry conditions and tons of fires burning. Rain, can't wait.

Wow, Shelagh, I had no idea that rain was needed in Canada near Vancouver! Sorry to hear that.

Hopefully, while I'm gone and you are in my house, you can have a thunder storm or two. That indeed would be unusual. Last night the storm was actually scary.....

My friend in Victoria said to send some rain his way. My sister in Seattle said they have an extended heat wave

Sparks, not only has it rained a LOT, but it hardly has gotten above 80F since May!
I would like a little wee bit of heat without the humidity! ha......

Don't forget the rolling thunder! Tonight it's supposed to be 11C, I'm not complaining. Beats 41C during the day in Monterrey.

Hey! You are getting all of our weather drama. Our stage is almost bare.

Chris, if you're here in SMA, let's meet. I think you have my email and phone #. Give me a call.


Steve. I would gladly send you some of our "drama"........believe it or not, it didn't rain last night although it started thundering about 4:30 in the afternoon and continued off and on til about 10~! Strange........

Weather has been strange everywhere. Here in Ohio we had the rainiest June on record. We have finally dried out, and have had a week of sunshine and summer temperatures. On the other hand, a friend just got back from a vacation in Oregon, and it was 100F in Portland.
At least the farmers in Mexico must be happy.

Bill, I agree, the farmers and people in the campo are loving the replenishment of their streams and rivers.......

We are usually all so worried about having enough water here. I think we're good for a long time now, LOL. You could go river rafting on the arroyo near my house!

Shannon, I think the arroyo by your house is the same one that is at the bottom of the hill just past the abandoned hotel. I went on Calz de Aurora today, over the bridge, rather then the one I just mentioned above. It washed away a couple of years ago and was rebuilt, but the roar right now of the water makes me wonder if it will withstand the rush! It looks like the Colorado River raging or something.......
Amazing.

Boston, normally pretty rainy in the spring and summer, has had two beautiful seasons, though with enough rain to keep things growing.

Hopefully your rainy season won't turn into something of biblical proportions.

Kim G
Boston, MA
Where it was even a mite chilly last night.

Kim, it hasn't been unpleasant, just surprising! It was 42 on the lower patio this morning, here. Definitely a bit nippy!