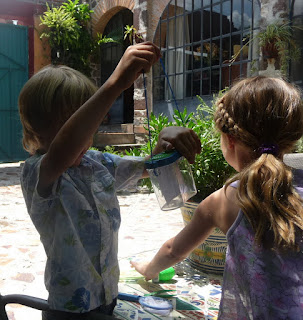 You just never know WHAT is going to trigger ecstasy and joy in a child.  When a friend gave a bag of toys to me for Matilda and Sebastian that he had picked up at the Dollar Store, I didn't know if the bubble makers or the water guns or the glow sticks or what would be their favorite item.  I was pretty certain that the bug collector, however, would be one of the ultimate fun things!  I remember my kids using a plastic container with plastic wrap over the top with holes punched in it.   HOURS were spent with that homemade toy. 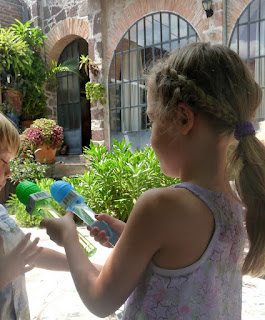 Wow!  The excitement when Sebastian realized that he could capture any small thing moving in the garden was a joy to observe.  Matilda felt it an important enough event to interview him with TWO microphones filled with bubbles.  He said that he was going to grow up to be a bug collector!  Then he asked me what the cardboard wrapper said.  When I told him it said "Backyard Traveler", he then added traveler to his resume so that he is growing up to be a bug collector and traveler - hmmmm, kinda like his Dad was for many years as a wildlife biologist with Wildlife and Fisheries and National Park Service! 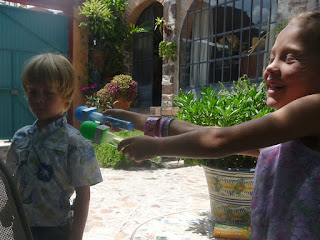 In a serious mood, Sebastian went off on his quest for any moving creature. Matilda was trailing and helping.   He got a roly poly, a WASP, (oops) we made him let it go, an assassin bug, and various other creatures.  On the top of the plastic case there is a little magnifying glass to watch what is inside the case.  There were whoops and squeals at any movement.
Oh yes, he and Mati caught a mosquito too.  Truly no moving bug was immune from being plucked either between the lid and bug case or with the new green tweezers that came with the case.  This went on for hours, literally. (There are lots of creatures in Grammy's gardens) 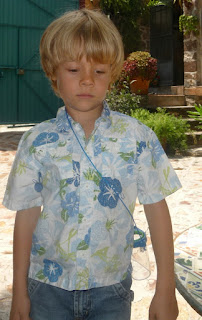 Sweetest of all was when Sebastian looked at me very seriously and told me he had let all of them go so they could be free!  Good kid..... 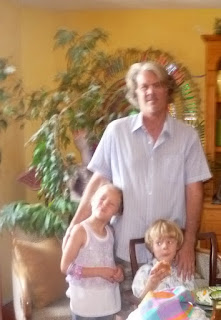 Here my main thought that morning had been to get the big pot of spaghetti made along with a cheesecake for John for Father's Day.  But, of course the BEST gift he could possibly have received was spending the day with his precious children. 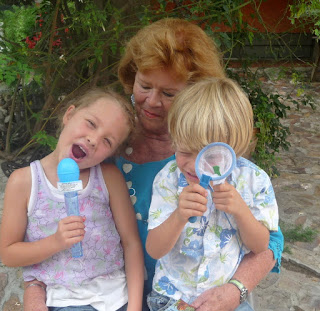 Matilda with her microphone and Sebastian with his bug catcher.  The simple things can bring as much joy as some expensive toy or gizmo.  Thanks to the generous person who had the forethought to bring a bag of goodies to Mati and Seb.  They have and will continue to bring many, many hours of pleasure.

A drum set. Sebastian needs a drum set. My Aunt Bessie gave me one to take back home. My mother did not share my repeated joy in beating out my future on the drums.

Steve, I would get drummed out of my son's life! ha. I remember that I bought a really fancy one with cymbals and the whole deal for my grandson Andrew when he was about Sebastian's age. It QUICKLY disappeared.......

Peter, great idea, the ant farm. They don't make much noise. The ant farm reminded me of the chia pet too. It was fun to watch that. I can also get Mexican jumping beans in the mercado. Thanks for jogging my memory.........

I remember when my two year old son received a really neat workbench tool thing for Christmas. He played with the box it came in for three days climbing in and out of it. Finally he did show interest in the actual toy once the box was mangled.

Thanks for reminding me about how fascinating bugs were at that age; I had nearly forgotten. Looks like all had a fantastic time.

Shelagh - I agree. My kids loved big boxes and would make houses and forts that lasted for months........

Kim - I like bugs outside too, including scorpions.......BUT little boys have no fear as in the fact that Sebastian caught the wasp!

Hi there, I was wondering if you could email me. I can't find your email address. I have a question for you. living.boondockingmexico@yahoo.com

Definitely save the water guns for their house! Those two grandkids are sheer joy for you!

There is little more fascinating to a kid than finding and examining life's little living miracles. I remember SO many joyful hours spent catching tadpoles, snakes, salamanders etc as a kid. It sure beats the heck out of sitting inside with a Gameboy, Smart phone or Ipad, which we see all to often these days!

Ha Beck, sounds like you have had the experience!

Shannon, I so agree. My kids and now my grandkids in SMA have so much fun
with the simple things of life. They have no Gameboy, Smart phone or Ipad so
they use their imaginations and have so much fun. Pretty darn smart kids too!