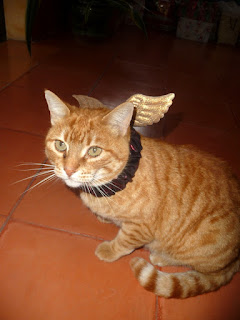 The longer Velcro "the cat" and I coexist, the more she surprises me!  There are several new tricks she has up her paws (no sleeves).  One of them occurred last week with the new people living in the guest house.

I had the bedroom door open and could hear her LOUD meow when she is trying to get someone's attention.  She wanted food from the new, unsuspecting couple.  The meow and meow went on and on.

I finally went upstairs, opened the door and she came in to her food bowl, which was full and her bowl with her low fat milk.  Gently, the lady of the guest house mentioned that it appeared she was hungry.  I laughed and told her that is how she searches out treats that unsuspecting people just might give to her.  I'm not sure if they believed me.  Velcro can be convincing.  She had left the house through the open bedroom door not 15 minutes earlier after chowing down up stairs from her bowl.  Sneaky little devil!

In the photo, those gold lame angel wings are a joke.  That collar used to be my dog Flash's.  Now Flash deserved angel wings as she did not pull tricks like Velcro.

Other tricks Velcro is pulling lately is to jump in my lap when I sit down in the chair in the living room to drink my coffee.  Now, this would not be a big deal, but after living in this house for nine years and not having anything to do with me, for her to jump in my lap is amazing.  It's not occasionally either, it's every time I sit in that chair!  I'm still startled.  For years, she had so little to do with me other then to get food that I find it funny that she has finally figured out that she can also get her back rubbed, IF she sits still.

Her ongoing trick of sleeping in the dressing room sink outside of the bathroom no longer makes me jump when in the middle of the night I walk by on my way to the bathroom.  She used to raise herself up just about the time I was passing by her and it was so startling.   No more.

Last week, she used her "I've got a gift for you" meow outside.  I know the sound.  It is a strange, high pitched meow.  Not her usual little meow.  I've now learned to turn on the outside light to see what the gift is rather then just open the door........This time it was a fluffy, grey little bunny rabbit.  Awww, what can I say?

There was no trace of the bunny rabbit in the morning.  In my heart I would like to believe she returned the baby bunny, unharmed, to wherever she found it.  Highly unlikely, however.  I'm beginning to understand why there are no more squirrels, coatamundis, skunks, lizards or snakes in the garden.

Velcro is not only a con artist, but, at times, is still a feral cat. Possibly it would be appropriate to have a sign on the gate that says, "Beware of Attack Cat".

What a great relationship. She is a great cat. And, not once has she conned me. Not that she hasn't tried.

I think you have learned to speak Cat. She has you trained.

As for sitting in your lap... perhaps Velcro is mellowing with age, or, after all these years, she has deemed you worthy of her attention. :-)

I have 3 rescue cats, two of which were found very young. They are definitely not feral. They are spoiled house cats, but they most certainly do hunt. It is the nature of the cat to hunt, it is a predator. They are a dichotomy. One moment they are snuggled in my lap, purring and looking deeply into my eyes, looking soft and innocent and the next, the three of them gang together and bring down a pigeon bigger than they are.

I bought a hanging tile in Italy with a grey strped cat (like our Martini) that said Beware Attack Cat. Martini was 23 lbs, so when sitting on you he got rather heavy after a short while. He figured that out a settled for laying on the ottoman and head buntting our feet.

Yes, Steve, I remember her meowing and circling you hoping for pity and a treat! BUT, luckily you didn't let her con you!........


Bill, it's something or it might be those homemade blueberry muffins that I make every now and then. She sure does love them.......

Wow Shannon, three cats. I bet they are fun to watch! Velcro lived in the garden and the school yard for two years before we could catch her. She definitely is a hunter. I can tell when she has gone down in the canyon cause she comes back with her belly all full of burrs.

Shelagh - 23 pounds! Oh my........I can't imagine. Funny. We once had a black and white cat that the kids named Fat Cat and called him FC for short. When FC wanted to come in, he would jump up, hang on the door frame and peek in the window.
It always freaked friends out who didn't know to expect such a thing.........
I'm actually very much a dog person, but somehow, Velcro has been fun to watch and I've learned a lot of lessons from her - some that I didn't need to know! Ha.

Kim G
Boston, MA
Where our own cat is doing a poor imitation of a poodle due to leg shaving necessitated by a vet visit.