A Gift from Zinacantan - A Beautiful Rebozo 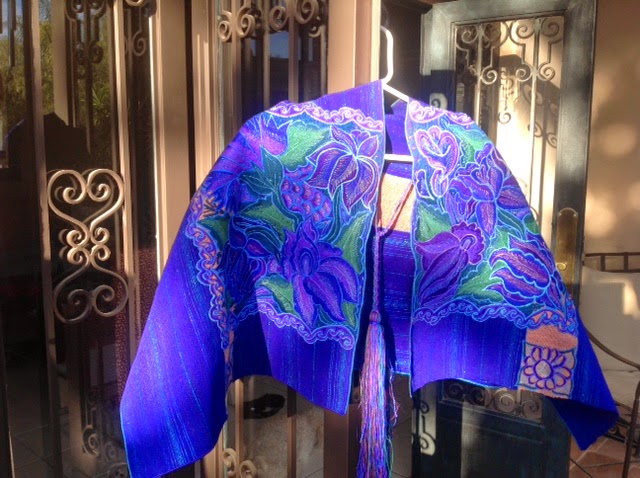 A lovely couple who recently moved to San Miguel gifted me with this magnificent rebozo a couple of days ago.

It all started about three years ago while they lived in Playa del Carmen.  She of French-Italian descent and he from New Jersey.  After having lived there for many, many years,  it seemed to them it was time to move
on.

Hence, they began reading Babsblog which often has some tidbit or the other about living in San Miguel de Allende.   The wife contacted me quite a while ago with various questions.  Then she wrote and said they were moving to San Miguel.  They did, right before the winter season.  Can you imagine coming from the tropical coast to San Miguel, in the bajio to live?  Especially as the winter season began?  What a shock for
them.  Heck, this winter was a shock for all of us.

In addition, the husband after arriving here had a severe heart issue that caused him to be hospitalized after being cared for by more then one doctor here in town.  It was a bad scene, although he is recuperating and his health is much better now.

I was not aware of any of this. In fact, I wasn't sure they had actually come to San Miguel to live until I recently received an email saying that "Yes indeed they are here and wanted to meet".  That they were leaving San Miguel to return to the USA and were going to live in Florida.

We set up to meet this week.  What an interesting couple.  They have been living about five minutes away from me and I didn't even know it.  We talked for almost two hours.  Her lilting accent was a delight.  Her zest for life was apparent.  He, it was obvious, adores her.

Having read the post I had written last month about my previous visit to Zinacantan, they gifted me with this magnificent rebozo.  To say I was surprised and overwhelmed would be an understatement.

What a generous gift.   It is not the first gift I've received  from a reader, but certainly a lovely remembrance of Mexico and Chiapas.

Thanks to Evelyne and Joe for their spirit, their kindness and, of course, their generosity!

What a lucky lady I am to have the opportunity to meet such lovely people because of writing these posts.
Posted by Babs at 2:49 PM

That really is a magnificent rebozo! How nice to meet your readers, unfortunate that San Miguel didn't work out for them though.

Good to meet them Shannon, bad that they are leaving after being in Mexico for 12 years!