It was my intention to read all the literature in the packet I received from the conference  before writing this post.  It isn't going to happen.  If I wait until I accomplish that, it will be over and a memory.

So, I'll share with you my experiences and impressions yesterday of seeing over three hundred (300!) people participating in this event.  It was shocking to see that many people, mostly from out of town and out of this country of Mexico, here in San Miguel for the conference.

The event has been held for several years at the Hotel Real de Minas which has lovely grounds and many rooms to accommodate the participants.

Arriving about lunch time, the roar of people having the buffet lunch was somewhat staggering.  Tables were set up in the dining area as well as outside in the beautiful, warm sunshine under clear azure blue skies.

Each person that I met commented about the incredible weather.  Many had hardly been able to get out of where they lived, because of snow and weather.  Many jokingly, I think, said they are not leaving.  It was 79F here yesterday, thankfully.

While waiting for the talk by Tracy Chevalier who wrote, among other things, "Girl with the Pearl Earring", I wandered the grounds to visit the Bookstore and the Artisan's Marketplace. Here is some of what I saw. 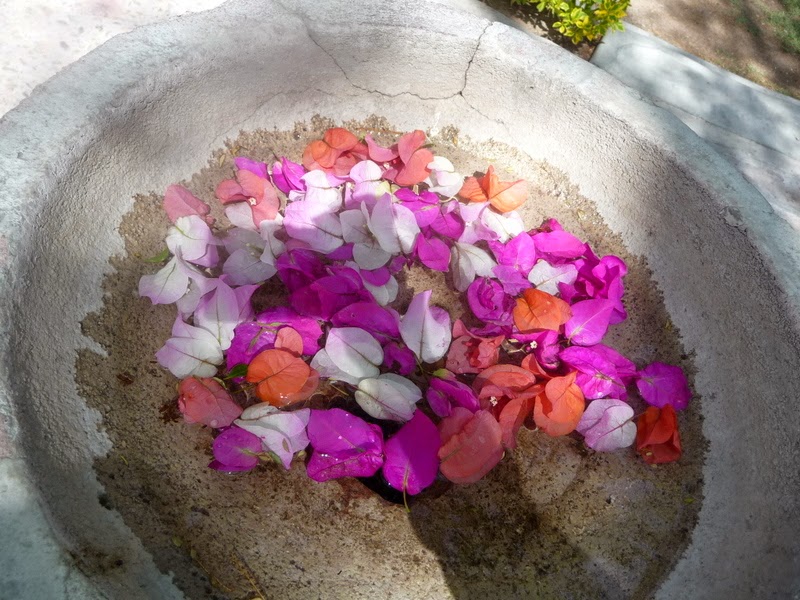 Bougainvillaea blooms in an empty birdbath.  I've seen this many times in Mexico and Guatemala.  Once in Guatemala an entire swimming pool was full of bougainvillaea blooms as one walked into the restaurant.  A scene of beauty I'll never forget.  This was tiny, but still lovely.  It was on one of the paths.......... 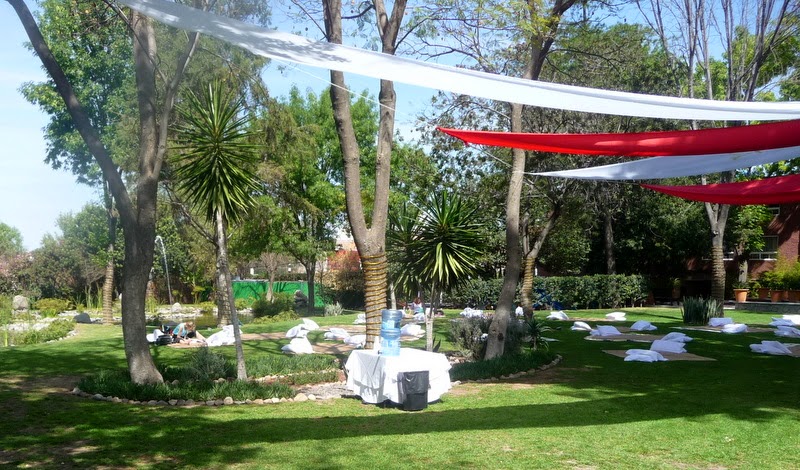 The grassy grounds were set up with places for people to recline and read or enjoy the sunshine or whatever.  It is HIGHLY unusual to have this much grass anywhere here in the semi-arid part of Mexico.

We all appreciate seeing this expanse of green.  Probably those coming from the Northwest where white is the predominant color at present, enjoyed it as well. 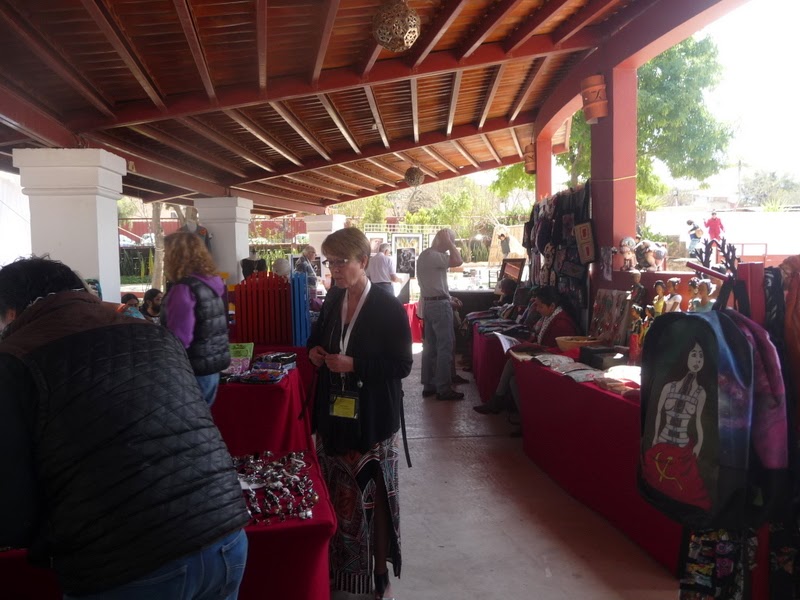 The Artisan's marketplace is showing for the first time this year.  People were invited to participate from other parts of Mexico as well as San Miguel.  My next post will be about the Weavers of Oaxaca who are trying to save the purple dye that is excreted from a conch.  If it becomes extinct, that will be the end of natural purple dye in the world! 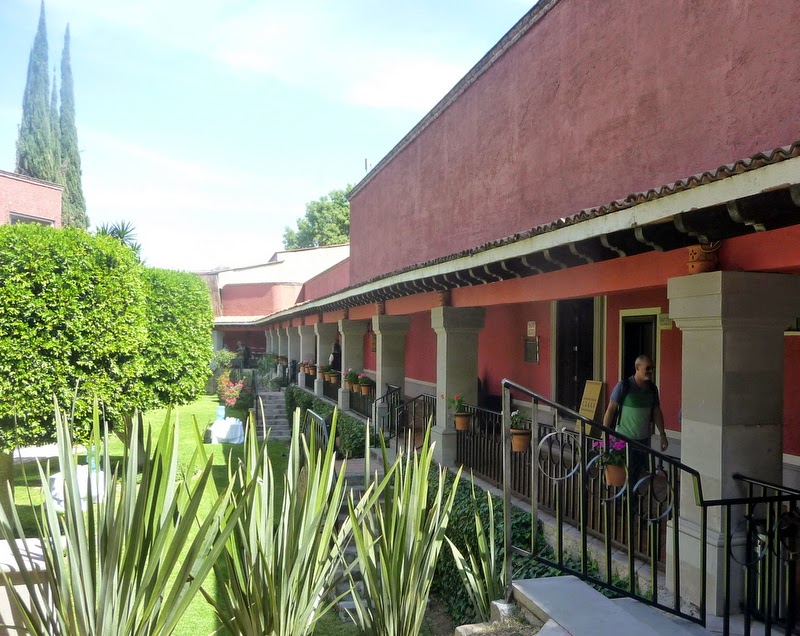 Sadly, I was so overwhelmed by the size and variety of books for sale in the Book Market that I forgot to take a photo!  This walkway is where all the meeting rooms and ballroom is for the various events. 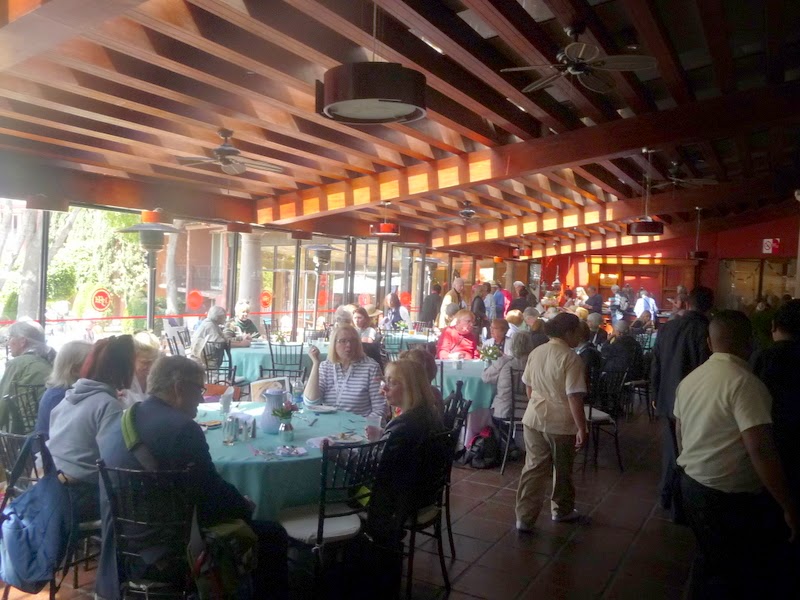 Impressive is the word that comes to mind for the hotel's ability to handle feeding this many people without any problems.  Well, none that were self evident.  Having eaten here previously, it is very apparent that the
cooks and staff work hard to make sure all are happy and satisfied. 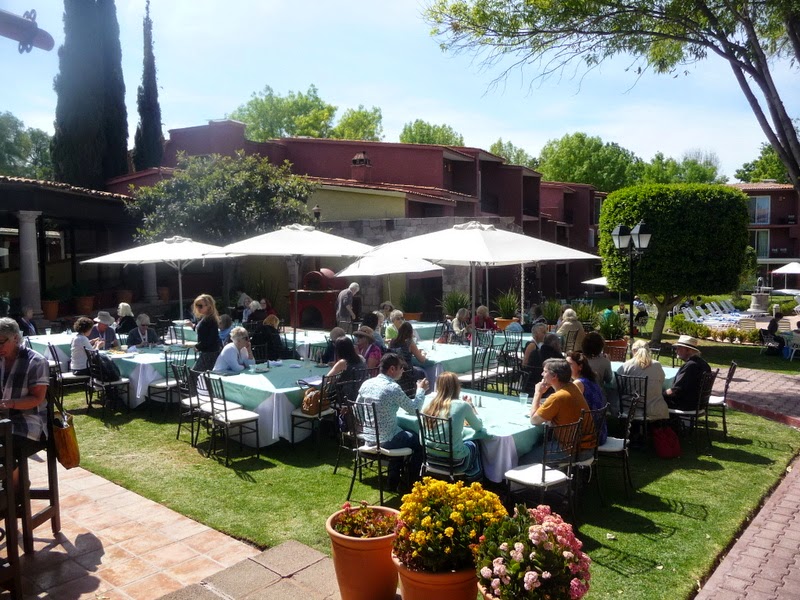 Here are the HAPPY participants dining al fresco around the pool and outside the restaurant. 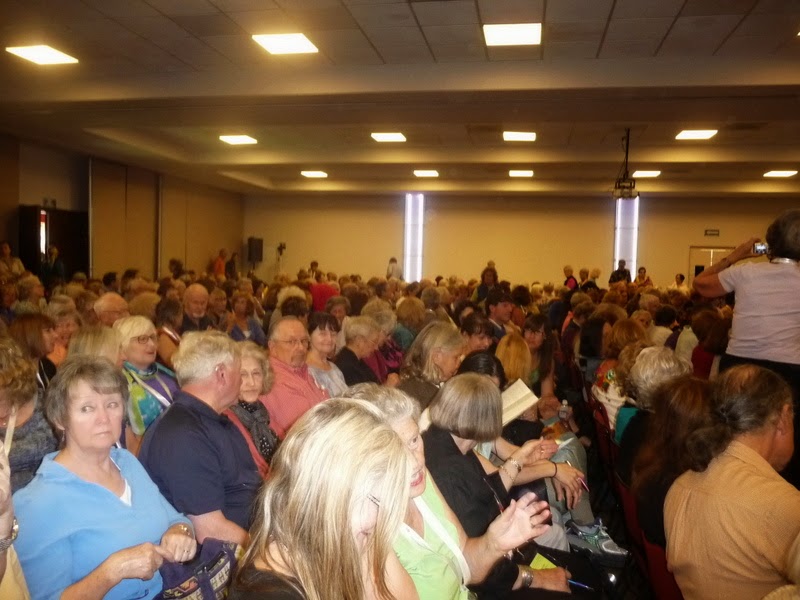 Once the ballroom doors opened for the presentation of Tracy Chevalier, the room quickly filled.  As far as I could determine by standing up and taking a few photos, there was not an empty seat. 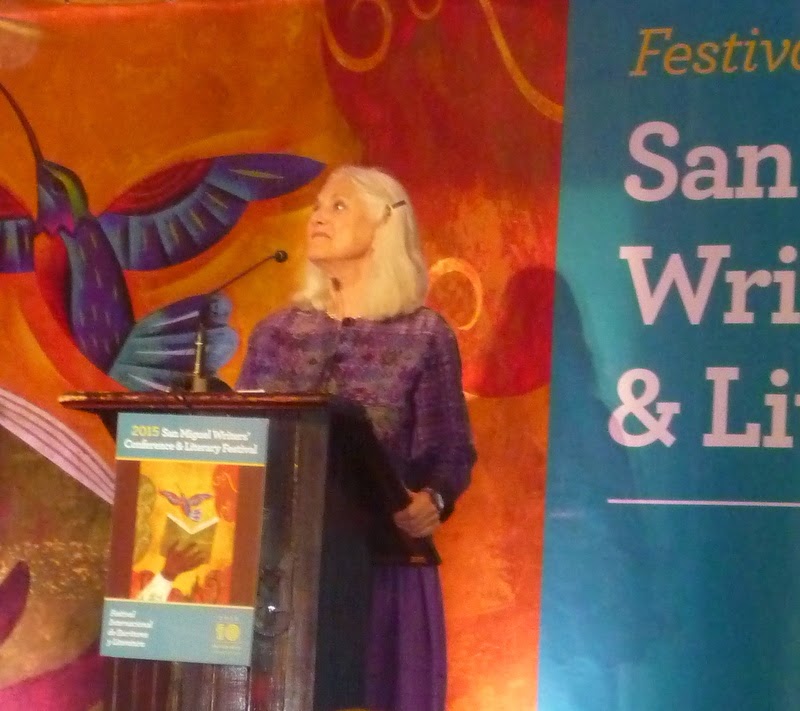 Susan Page, the force behind this magnificent event, welcomed everyone.  Interestingly, she asked different segments of people to stand up.  Some of the groups were "Those that this was their first time".  Next it was
"Those who are returning" (large group).  Those from the USA and those from Canada.  Lots.  Then she asked for all the Mexicans and quite a lot stood.  The biggest round of applause was for this group!  Yeah.

Susan's comments to the Mexican participants was heartwarming as she expressed her love for the people and country of Mexico.  She urged all at the conference to embrace the people, the culture and the town.
Lovely.

Earlier, while waiting for Tracy, I spoke with several participants.  To meet these accomplished, published writers was a delight.  Their interests were fascinating.

One woman, Bonnie Lee Black, from Taos, New Mexico wrote a book on "How to Make an African Quilt".She wrote this after spending time in West Africa and realizing that teaching the women how to quilt would assist them in making a living to take care of their families.  I could have talked with her for hours.  Her book was published by Nighthawk Press.  Hope I hear from her again.

Another woman that I met and talked with was Penny Pearlman, who wrote a non-fiction book called "Pretty Smart, Lessons from our Miss Americas".  She lives in Westport, Ct.  What a dynamic woman with many interests.

Last but not least, as I was out on the grounds, I met a 40 year old woman, Christy Crutchfield from Ardmore, Oklahoma.    She told me she had just turned 40 and decided to come to the conference.  She is a blog writer as well.  When she said Ardmore, Oklahoma, I remarked that a fascinating female attorney from
Ardmore has come to stay in my guest house twice.  She immediately said Cherie Clark.  It's a small, small world.  Cherie Clark reads the blog and has for years.  Hi Cherie!  Don't you just love all these synchronistic things that happen in our lives?  I relish them.

Christy and I talked for a while as I told her that her life is just beginning.  That I had started my business at 40 and it was the time of my life.  I hope we'll stay connected as well.

The talk by Tracy Chevalier was exhilarating.  She started her career as a historical fiction writer at 30, about twenty years ago.  She has written nine books since.  The amount of research she does for each was surprising and daunting.  As she spoke, I remembered how awed I was when reading "Girl with a Pearl Earring" in 1999.

Her writing is so lyrical and full of details that transport you to that time and place.  Of course most of you
know that it was later made into a mesmerizing movie.  Tracy said she was very surprised how that book has
changed her life.  She lives with her husband and children in London, England but graduated from Oberlin in Ohio.

That was the first presentation I heard.  Tonight I'll hear Scott Turow, a former attorney turned writer.  His writing is extremely different then Tracy's.  Then tomorrow morning, for me, Gloria Steinem will be the piece de resistance.  Any woman who lived through the 60's, 70's and 80's owes a debt of gratitude to her whether you agree with all her viewpoints or not.   She and a cadre' of other women spoke up and stood up for the rights of women.  I will be honored to hear her speak.  She is truly an icon of our generation.

There are so many other speakers.  Alice Waters spoke last night  Angeles Mastretta will speak on "The Emotion of Things"and Richard Blanco will speak on the fact that he was chosen to serve as the fifth inaugural poet of the United States.  Not only are there lectures, there are workshops, roundtables, live theater, festivals.  It IS the "whole enchilada".

My plans for next year - to start saving my money now to be able to go to all the things that are possible!

For way more information then I could possibly post here, search the web for the 10th Annual San Miguel Writers' Conference & Literary Festival.  They have a magnificent website and a Facebook page as well.

Would love to attend - maybe next year.

The conference is scheduled during my annual tax jaunts north. I have been tempted to attend in the past, but this would have been the year to attend. My favorite contemporary fiction author, Scott Turow, is speaking this year -- as you noted. Had I signed up, his was the only talk I had planned to attend. Ah, well. rendering unto Caesar has pulled me away from what undoubtedly will be a magic moment.

Calypso, let's plan on it!

Steve, you can certainly handle "tax jaunts" at another time.....

If you look at the bios of the workshop moderators and lecturers, it is beyond anything I could imagine. As Susan Page said yesterday, as the ONLY tri-lingual conference in the Americas, we attract the creme de la creme of people interested in teaching these workshops! Fabulous resource for anyone interested in writing, screenplay writing, etc.

So happy you met my dear friend, Kristi Crutchfield Cox. Kristi & I talked with your son yesterday. I asked John to convey my hope that you will turn your blog into a book. John replied that I would have to tell you as you don't listen to him ... Lol. So, dear Babs, I think you're blog would make a wonderful book. Thanks for all your observations!!!

CheriRae, I didn't know you were in town! Would have loved to have seen you. John told me that ya'll were in Bajiogo and how dynamic the whole group from Ardmore was.

Thanks for your comments. I've been approached by someone who wants to serialize the blog into a book. We'll see.