Each year that I go to the beach on the Pacific, driving, I see people heading to San Juan de Los Lagos.  It is usually a trickle.  On the way back home, at the end of January it is no longer a trickle, but a flood of people walking alongside the highway.  Families, children, teenagers, old people.  Truly an emotional sight.

Most are walking, some riding bicycles, but mostly walking.  It takes me three hours to DRIVE to San Juan de Los Lagos from San Miguel!  Many, many faithful pilgrims walk from San Miguel, Zacatecas, Queretaro and even Mexico City.  Well, basically every place within a week's walk.

Javier, my gardener went last year.  He was gone over a week.  Several businesses close.  It's that important.

Now I was raised Catholic.  We went to church on Sunday.  Catechism classes if we weren't going to a Catholic school, said prayers and the rosary at night before bed.  Kneeling and fasting before Communion was probably the roughest part for me as a child.  I frequently fainted out of the pew on Sunday morning from not having eaten since the night before.  I write this with embarrassment, but it is true.  I am no longer a practicing Catholic but remember it all as though it were yesterday.

Then I come to Mexico.  I see people crawling from the back of a basilica to the front or from farther then that.  I see people outside my house at midnight and 6AM with banners honoring the Virgen.  There are many Virgens in Mexico, so I dare not say which one.  It gives a whole new definition to Catholicism for me.

People go year round to both sites, but the culmination for the Virgen of Guadalupe is her honored day on December 10th.  For San Juan de Los Lagos and Our Lady of San Juan, it is February 2nd, Candlemas Day in the Catholic Church or Candelaria.  This is the day that Jesus was presented in the temple by Mary and Joseph.  It is also the time in Mexico for the end of the Christmas season with the dismantling of the stable and removal of all the statues for the Birth of Jesus.  In addition, it is the time for the blessing of the seeds for the new planting season. 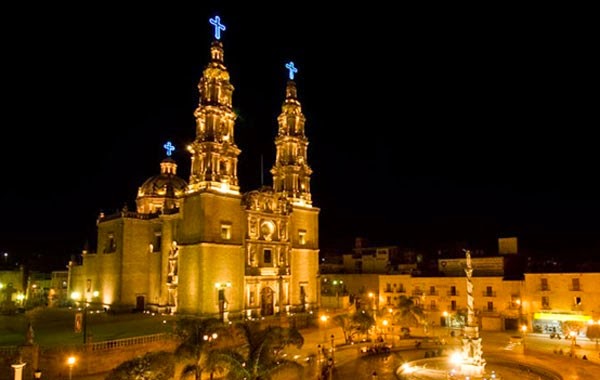 Around two million people will descend on this small town.  There are only 3345 hotel rooms, 57 guest houses and the Basilica can handle around 10,000 pilgrims.  Along the way, most people camp on the sides of the roads.  Food stands are set up from Leon to San Juan de Los Lagos to accomodate all the walking people.  Camping sites as well.

It is very interesting to me that this is a Basilica which means that this could be the home of the Pope or Bishops if they ever come to this area.  That is a big deal in the Catholic Church.

The statue that all go to see was made of sugar cane paste in the State of Michoacan in the early 16th century. Ironically, Our Lord of the Column at Atotnilco has the same history and is greatly revered as well.

The first miracle, according to history was in 1623 when a seven year old girl who was dead, returned to life after the statue was placed next to her.  Of course there have been other attributions since then.

The photos below were taken by me a couple of years ago when a group of pilgrims returned to San Miguel with the banners they carried to San Juan and back.  In addition, the back of this truck was decorated to carry a replica of Our Lady of San Juan de Los Lagos back to San Miguel.  I presume she was blessed at the Basilica. Here they were unloading everything to take into the Parroquia. 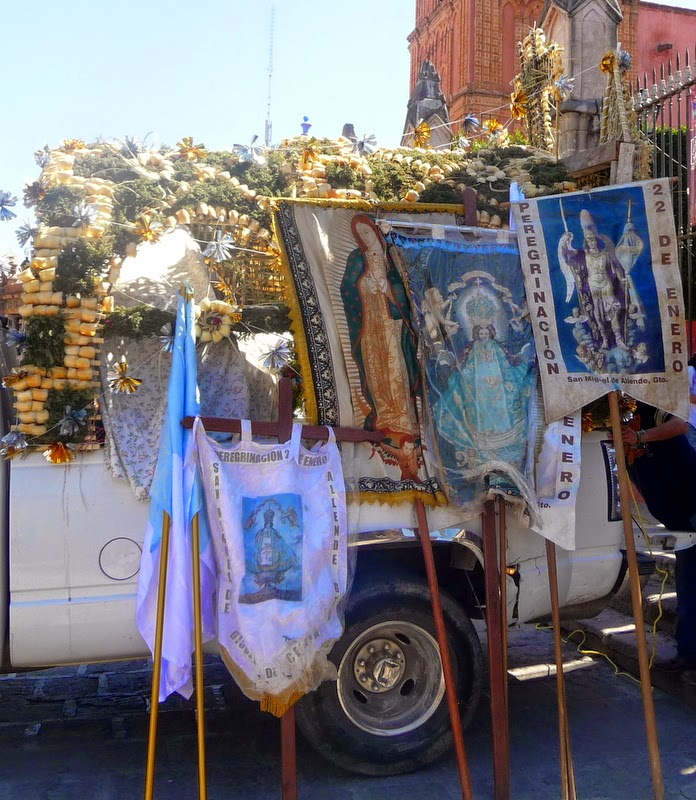 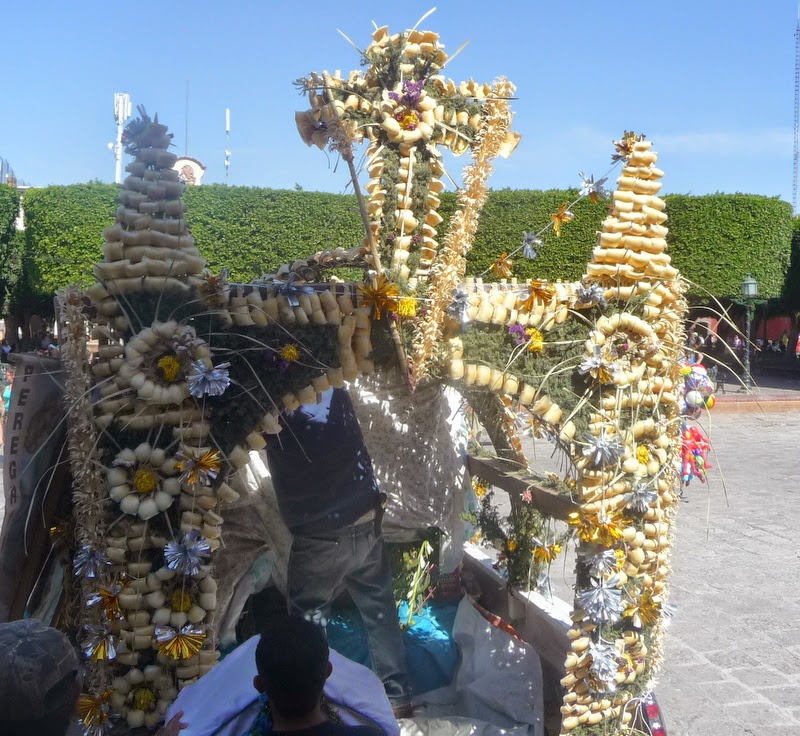 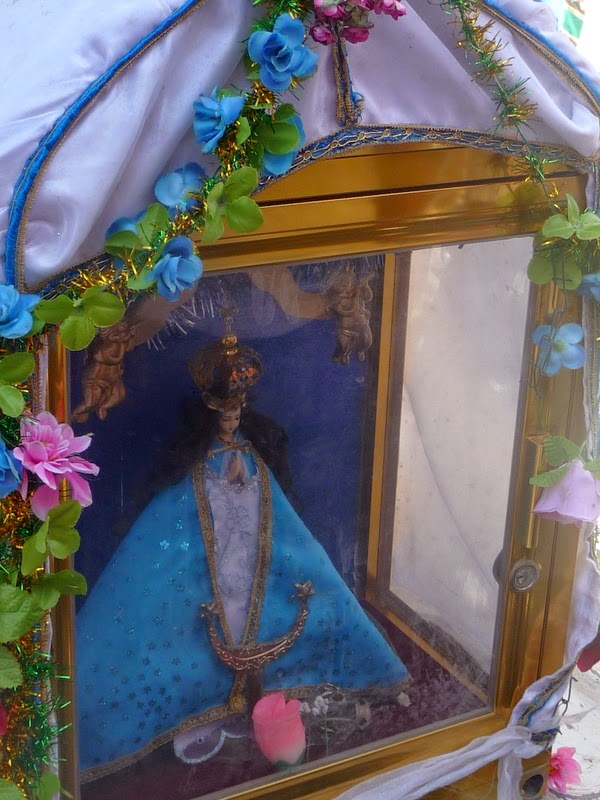 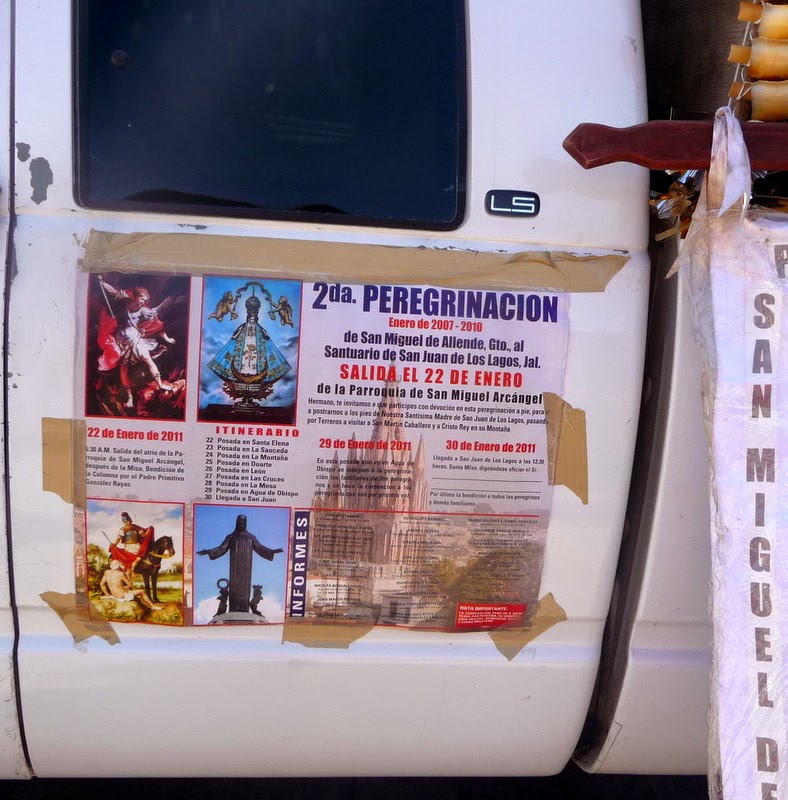 On the side of the truck was the poster telling about all the events of the Pilgrimage.

Mexicans who are Catholic live their religion.  It certainly isn't just a once a week thing.  I'm astonished and honored to see such faith and dedication by these people that I admire and respect.

Tomorrow, Candelaria, is a holiday.  Banks and schools are closed, so are government offices.  Again, it shows that this is an important day to Mexico in several different ways.

I wonder why Estadounidense Catholics don't make peregrinaciones to places like the Grotto of the Redemption (http://www.westbendgrotto.com/) and other sites of religious significance. Or do they?

Jennifer, I don't know if Catholics do now - I've been away from the Church for 37 years. But, when I was a little girl and went to Catholic school people talked about going to Lourdes in France. That is the only place I've ever heard of.....

Babs, tomorrow's legal holiday isn't in honor of Candelaria. That's not a legal holiday in this country. Constitution Day, which traditionally fell on February 5, and which has been moved to a Monday, is the legal holiday.

Next year, February 2 will fall on a Tuesday. And it will be business as usual for banks, schools, and government offices.

Thanks Jennifer for the clarification. I said to someone that I didn't remember there ever being a holiday on Candelaria before and they told me it always had been.

These 3 day holidays just are a nightmare in SMA. Took me 45 minutes to get from my house to the Real de Minas hotel this evening. The town is PACKED, again. Horrible. Even the taxi drivers are fed up. Too many cars and people......

On the other hand, here in D.F. traffic was very light this evening. Between people who have left the city for the long weekend, and people who stayed in to watch the Super Bowl, it seemed almost as tranquil as driving in Ohio.

Hi, I enjoy reading your site! Is it okay to contact your through your email? Please email me back.

Janet, you are SO correct. Thanks for pointing that out.

Bill, almost every license plate I see in SMA this weekend is DF. They are ALL here.....enjoy the quiet....

Kathe K., thanks for posting.

Thanks for sharing the story of the pilgrimage. Would love to be in Mexico on Candelaria to witness all the statues of Baby Jesus in new clothes carried into church to be blessed.

Unknown said...
This comment has been removed by a blog administrator.
10:50 AM

..found your Blog,as I was searching pictures of the Pilgrimage.. 39 years ago,while teaching in Leon..I walked the 69 miles..my Husband wad in the group I walked with...5 kids,and 2 Grandkids later...the rest..is History!!

..found your Blog,as I was searching pictures of the Pilgrimage.. 39 years ago,while teaching in Leon..I walked the 69 miles..my Husband wad in the group I walked with...5 kids,and 2 Grandkids later...the rest..is History!!