A spontaneous decision by a dear friend to invite a group to her home to hear poetry and music was intriguing, to put it mildly.

In Houston, we, a long time ago, had Sunday soirees where various artists of a creative ilk, would come to share with us their creativity.  It was always the highlight of my week.  It was interesting to experience the flood of emotions on Friday evening, when those memories returned.

Having never heard of the poet or the musicians, I couldn't wait to see and hear the creative endeavors of both. Little did I know what an enchanting evening it would be.

With many people there I did not know, it was also interesting to meet new faces and hear about others lives as we munched on a light repast.

Then Moira Egan was introduced by our hostess.  Moira is a resident of Rome, Italy with her husband Damian Abeni who is an Italian translator among other things.  Moira read from three different published books of hers.  Bar Napkin Sonnets won the 2008 Ledge Chapbook Competition.  Many other awards and degrees from Bryn Mawr,  John Hopkins University and Columbia have given Moira's talent a good background for all the accolades she has and will receive.  Sorry to admit that I cannot remember the name of where she is going in Connecticut as part of a program or fellowship in the next month or so.  Hers is a name that will be heard from over and over in the future, I"m sure.  Her reading definitely set the mood for the evening.  Sadly, I did not get a photo of Moira and her husband. 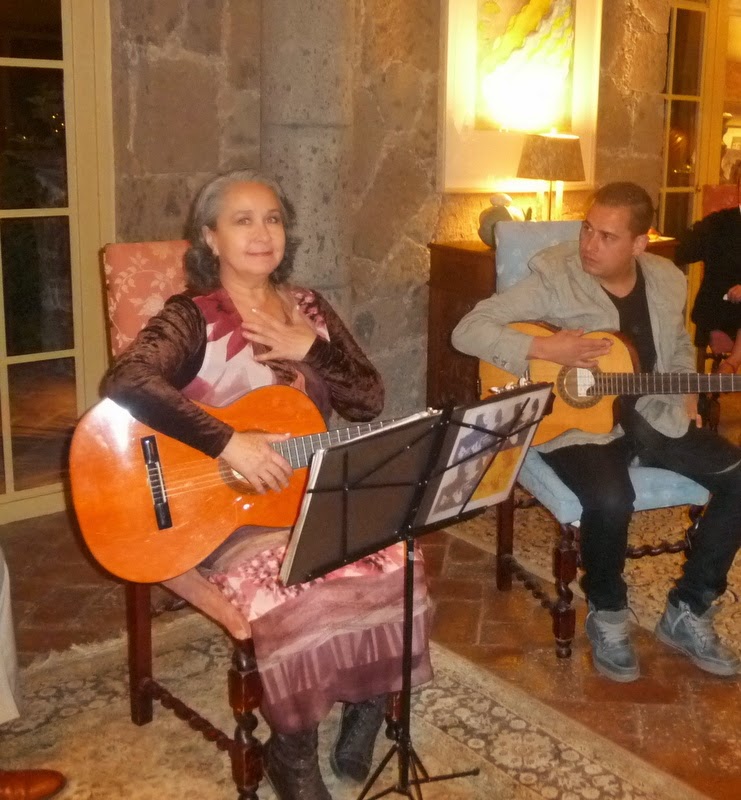 Then, as a change of pace, Rosa Guadalupe and her son played guitars in the music of Mexico and Cuba, along with Rosa Guadalupe singing in the most beautiful voice.  Most songs were in Spanish with a couple of surprise songs in English as well.  Melodious and memorable.

Being lulled by the music and the readings, when all was over and it was time to leave, it was not easy to brave the cold outside after having felt so warm and comfortable inside.

The marvelous evening remained with me for many hours, even after returning home.  It was a delightful surprise.  Thanks so much to the host and hostess for including me.

In deed it was Dan. I hesitate to say magical, but it was that and enchanting as well.........

I love Cuban music. I wish I had been there, too.