The Week That Was

There was a lot of scuttlebutt about what was going to happen on November 20th, The Anniversary of the 1910 Revolution.  In view of the missing 43 students, protests were happening in other places.  What would happen here?  On Facebook all kinds of photos of demonstrations were going on, especially in DF.  Other then the marchers that I showed you in the post on the parade, that day, this is what was happening at 5:30PM when the call for the demonstration had been circulated. 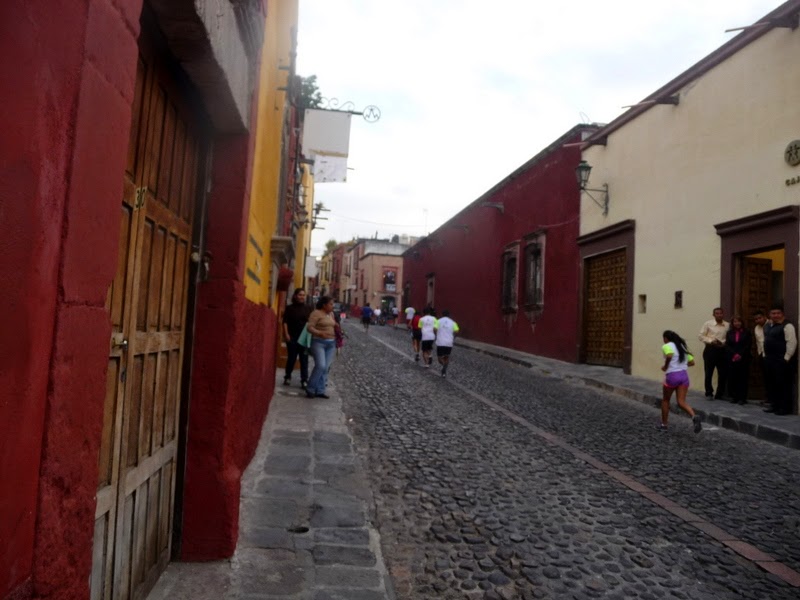 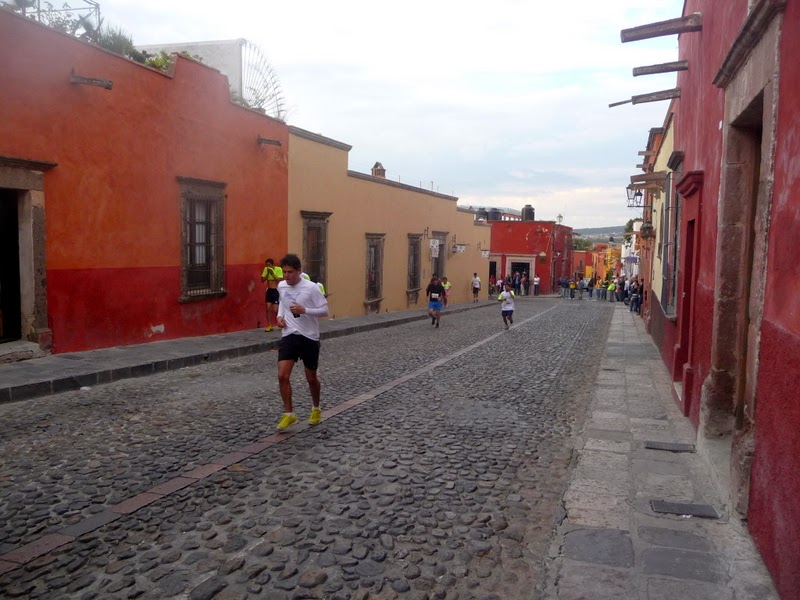 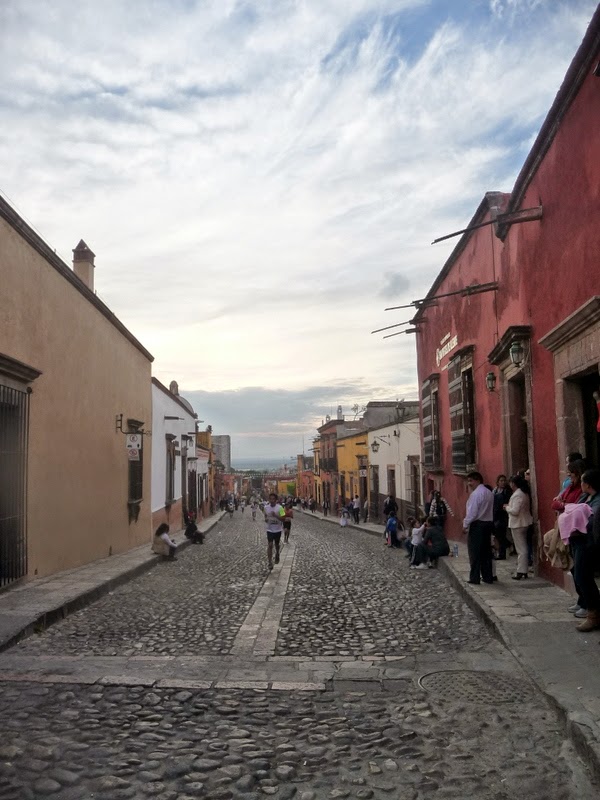 A race on two of the busiest streets in San Miguel.  Coming up Mesones and then heading on Nunez.  Major thoroughfares.  Kudos to the police for somehow not having any cars parked on these two streets.  One would assume the whole route was this way.  Amazing sight at 5:30PM on a holiday!

Later that evening there was a peaceful vigil in front of the Parroquia around 8PM with candles and many people.  I wasn't there, hence, no photographs.

About this time last week, the cold weather swooped in.  And I do mean swooped.  About 4:30 that afternoon, the wind was whistling through the trees.  Almost bending them over!  Uh oh, I knew what that meant.  Next morning it was 26F on the downstairs patio!  The following morning it was 28F.

Now Velcro has learned that the heater, as close as possible, is the place to be.  Hence this photo.  It doesn't even matter if its turned on...........if she sees it out in the middle of the room, she's right there.  It makes me laugh if it is off and she still has her paws tucked under it!  It quickly warms my bedroom with the door closed. 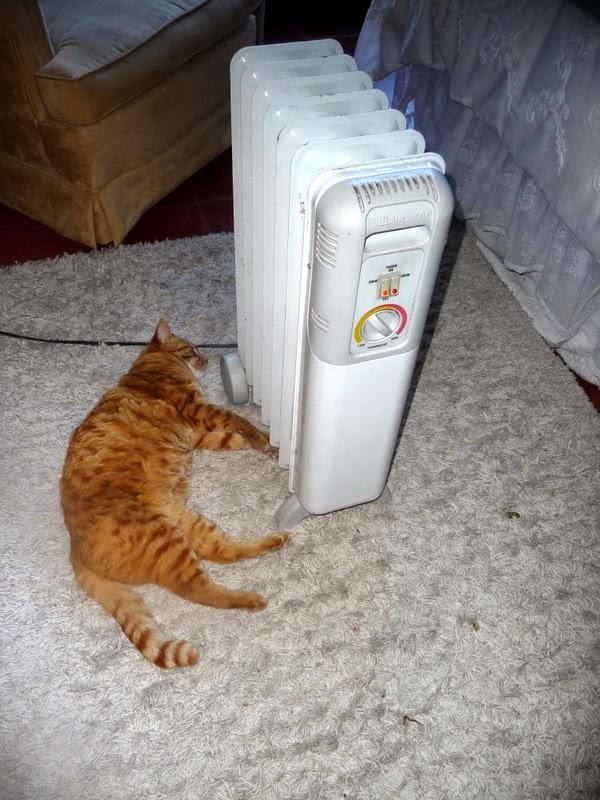 This past Thursday was Thanksgiving as all US citizens know - having lunch with friends UP the hill from me overlooking the canyon, I could hardly wait to see what my house looked like from that vantage point.  What really, really surprised me was the fact that you could see the big presa (reservoir) on the other side of town from there.  The one where the ibis fly back and forth to each morning and night.  In the morning, they fly up to the one above this house.  I see and hear them about 8AM every single day.  Then at around 5PM, they head back to the big presa.  The biggest surprise was to realize how small San Miguel really is.

People inaccurately ALL the time say there are 140,000 people in San Miguel.  But, what they are really saying is in San Miguel county (although Mexico doesn't have counties).  The area of that population goes all the way out to HWY 57, the road ultimately that gets me to Texas.  Down to Comonfort and up to Delores Hidalgo (45 minutes away, driving).  There are many, many villages and towns that are in this territory.  They are part of the 140,000 population figure.  In actuality, I would say that the number in the town proper would be somewhere between 25,000 and 40,000. 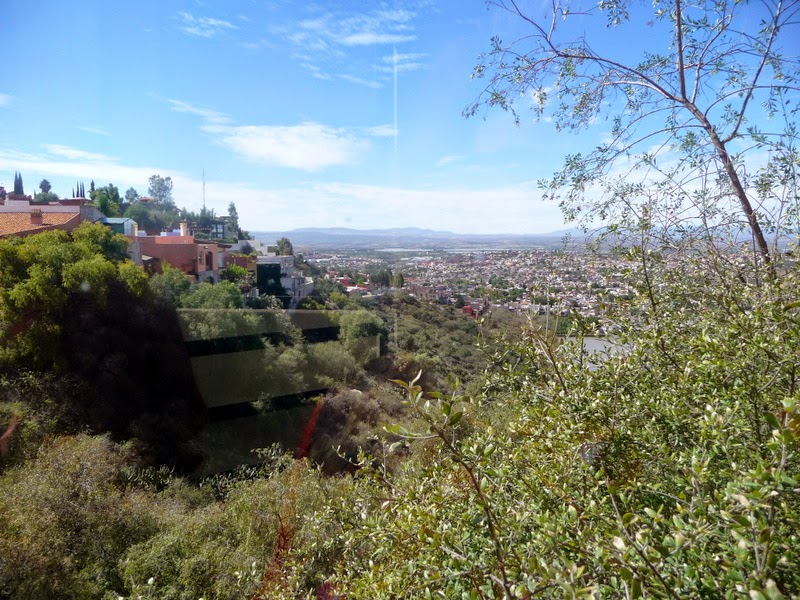 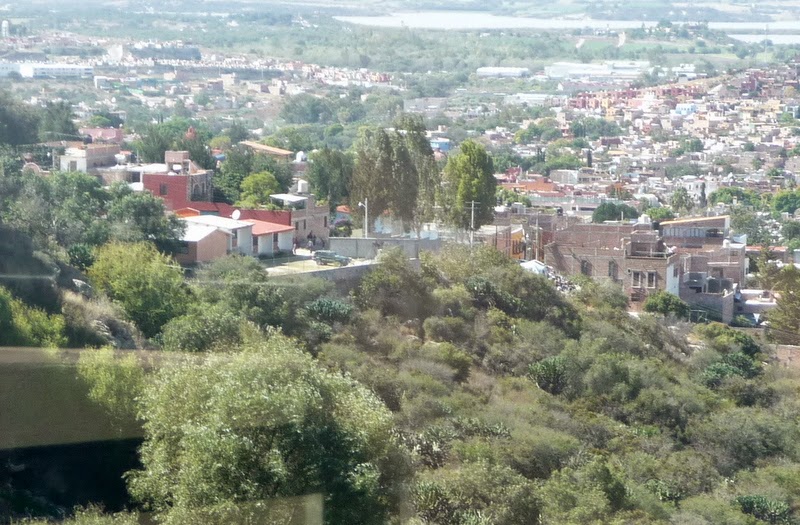 The first photo shows the presa (reservoir) in the distance.  The second photo shows some of my property.
The area in the middle of the photo with some of the big trees!    Fun to see from this angle.

Then yesterday, Matilda and Sebastian arrived about 9 AM for all of us to go to a big sale at ALMA.
They were dressed for the weather.  I, based on their clothing, had on about four layers myself, including gloves.   All I can say is that I never intended to live somewhere where I needed gloves. 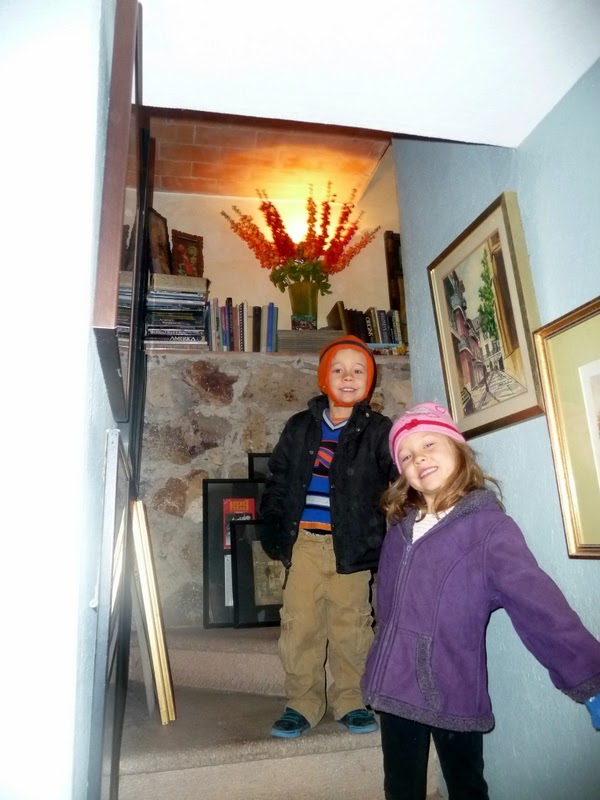 We headed to the sale where there were so many people that we left within ten or fifteen minutes.  Returning here, Grammy (that would be me) fixed pigs in a blanket, chocolate milk and scrambled eggs.  A fun day was had by all............

I want a second opinion on that population figure. :>)

Ok, you find it! I've tried and tried......of course, the realtors would go ballistic as they THINK that the more people and the more gringoes, will bring more gringoes to buy those big mansions.
However, I can't even begin to tell you how many people DON'T come here because they hear the realtors' #s of gringoes.......truly.

I found a figure from the City Council estimating the population in 2014 as 80,000. But I am always reluctant to accept anything any politician says. Either way, your point is right on. San Miguel de Allende is not the huge urban sprawl that some people like to portray.

I find governments always overstate because that way they get state and federal funds in Mexico for all kinds of projects.

The # I found is 59,061 which sounds more likely to me. There are so many people leaving! More then are coming....interestingly.

the 2 different occasions I was there this fall, seemed like lots of talk about who'said leaving, too. Curious, cuz the town's as beautiful as ever to me. 1st visit was November 1996.

Dana J - People, for the most part, are those who are single (mostly women) and living on social security. Can't meet income requirement any more which went from $1,200USD a month to $2,400USD per month in order to have temporal visa. Sad, many are artists or writers or whatever. People who have been here for a long, long time. It's a great loss for the town!

I loved your comment about not imagining living somewhere you'd need gloves. And gloves aren't exactly the first thing people think of when you say "Mexico."

We had bougainvilleas in California, and they didn't tolerate any frost. How do they survive in SMA when you're getting temps in the upper 20's?

The bougainvillaea seem to tolerate the 20's. sometimes the blooms freeze, but since mine are so huge (the actual bushes planted in dirt) they always come back. Even when hacked by the people behind me, thankfully, they come back....I never tire of the intensity of the color. The hummingbirds feed off of them daily as well!