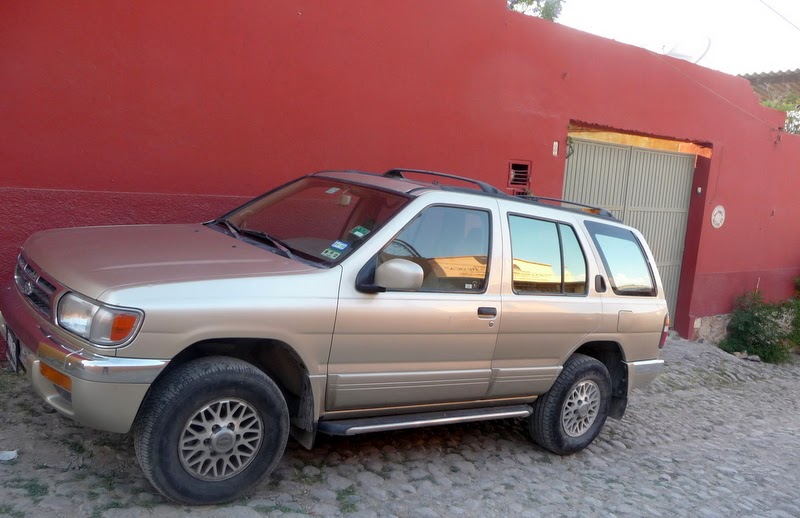 The saga began last November.  Seven months ago.  The engine light came on.  Of course, I freaked out as I take very good care of this 1998 Nissan Pathfinder.  I hope it lasts as long as I do!

Off to Luis, the mechanic I went, speedily.  The conversation was that I was heading to Houston and now what.  He said to have the Nissan dealership tell me what was going on with the emission system so we could get the parts, if necessary when I returned.

True to my word, I drove to the Nissan dealership on 610 near the defunct Astroworld in Houston one day and had the whole car checked out for about $200USD.  The five page list staggered me.  So did the cost to do the repairs which was over $6,000USD.  I, of course, just laughed.  The car has nearly 200,000 miles on it and isn't worth, probably, more then $2,500USD.

Anyway, after regaining consciousness and looking at all five pages, I was frightened.  I trotted over to the Parts Department and asked the man to look at the list and tell me if any of the things were life threatening as I was going to drive it back to San Miguel de Allende, Mexico, over 1000 miles, and didn't want to ruin the car.  His last name was Hernandez.  He understood.

He quietly told me that no there was nothing that was critical. He even said if there was an aftermarket store near where I lived, I could get the parts for a lot less!  In addition he told me that the engine light automatically comes on at a certain mileage and not to panic.  Whew!  I drove it back here with no problems except for the rocking back and forth that it does at about 80MPH on the toll roads.  So I stayed at 70MPH.

Over the ensuing months I've met with Luis, the mechanic.  He took the list to Celaya and got prices for all the parts.  He also went to Auto Zone here in San Miguel and got their prices.  Around $900USD for all.
THEN he said, I need to check to see if you really need all these things.

He has been busy working on other cars and said he would call when he could get to me.  Yesterday I took the "bull by the horns" and drove over to his work yard to leave a note on the door.  Out he came.  He suggested we go to a place where he could put the car up on a lift and check it out right then and there.

Off we went to the Bardahl yard in Col. Guadalupe.  A big operation that I had never even noticed in all the years I've been in SMA.  At least fifteen mechanics busy working on six cars while I sat there for two hours waiting for one of the lifts to be available.  It was like watching a ballet of workmen.

It was fascinating to watch Luis.  He has a great big booming laugh and visited with all the mechanics to find out who would be finished first and would they let him use a lift for 30 minutes.  Patience in Mexico is absolutely essential.  Time is not important.  At least it didn't seem important yesterday.   We waited.  Luis visiting and watching all the work.  Me sitting in the car, patiently!  Really for TWO hours.

Finally, a lift became available.  What happened next, I think, would only happen in Mexico!  About five mechanics along with Luis came over and began to minutely check out the car.  One thing they discovered was that the two front tires didn't match!  What?  Nope, I don't know if when they checked the car at the Nissan dealership they didn't put the tires on correctly or if when I bought new tires a couple of years ago that happened.

Anyway, after "the group" finished going over the car, we had the information we needed.  Several things on the Nissan list were not needed.  Surprise!  Not one penny exchanged hands.  They all shook hands when they finished. Amazing.  Luis clapped the shoulder of the oldest man who seemed to be in charge.  A beautiful sight.  Me, I was now sitting on a board sitting on top of two large cans!

Off we went to Auto Zone.  It's a store that has been opened for less then a year.  I felt like I was walking into the USA.  Wow, what a nice store.  What a great inventory.  They had the struts, shocks and brake pads we needed.  Voila.  Luis needed a little money to have something done to the rotors, whatever that is, and intends to have the car work completed today.

If, all goes well, the total cost of having the work done here will be less then $400 USD!  Oh, and how to fix the engine light that is still on?  Luis is going to remove the bulb, ha.

One thing that I thought was very interesting in everything yesterday was that he wanted to use Monroe products from the USA and did not necessarily want to use products from Auto Zone because he said they are made in China.  There is a HUGE resistance to anything Chinese in Mexico.  Rightly so.   But, in the long run, rather then driving the 45 minutes to Celaya to get parts, I convinced him to get them here as I jokingly said my car is Japanese (which it was made in Japan) and it couldn't be that bad.

Keep your fingers crossed that I have the Pathfinder ready for road travel today or by the end of the week.
Where am I going?  Who knows?  But it is fun to think about..........

I'm grateful that I observed the camaraderie of the Mexican men yesterday.  That was a gift!  Every day is a lesson in Mexico if you take the time to observe.

The engine light could be a simple as a bad gas cap. They also should have a inexpensive tester $50 dollars that resets the engine trouble light off.
Car repairs in Mexico are mostly done as required, not preventative like in the US. At least you have a mechanic you can trust which is half the battle.
Did you get the tire replaced, that could account for the vibration over 70 mph.

AutoZone is wonderful for bringing out the inner redneck that lurks within all of us. Of course, I don't know shit from shinola when it comes to matters mechanical, but just a few minutes in AutoZone has me lusting for tacky decals, mudflaps, spoilers, and air freshners. And the staff there is incredibly helpful. Whenever I feel overloaded with fresa, uppity, intellectual bullshit, a trip to AutoZone brings me right back down to earth.

Barb, lovely commentary on "Mexico style" and it's advantages. I have over 200K miles on my Honda, the diagnostic computer is fried and, thus, the engine light stays on. Trusted mechanics say my car is in good mechanical shape and that I should simply watch the heat gauge and listen for odd sounds. I'll ask them to take the bulb out next time I'm in there. xo

Tancho, the mechanic was "found" 14 years ago and has not only become a trusted mechanic but a trusted friend. He lived in Milwaukee at one point and so we converse in both languages. He is a fine man who graduated from the 2 year mechanics program in Celaya. Who knew? Anyway, he goes above and beyond the call of duty for all his customers. I've sent him much business and all but one have praised him and thanked me and continue to use him. I reminded him of that yesterday since he's so BUSY., ha.
The tires are being switched out and that one that is the wrong size will be the spare, which hopefully, I'll never need or just need for a short drive. Thanks for the other info.

Jennifer, you made me laugh out loud. I walked the aisles and so much stuff that I didn't even know existed but, I still wanted some of it! I too, lusted for tacky decals and air fresheners. Thanks for putting into words a much better description then I did! BTW, now I'll be able to make that trip to Morelia, hopefully.

La Tejedora, Glad to be of help! Hondas, Toyotas and Nissans are such dependable cars. Wish I had known after spending so much money in my other life on cars that weren't as dependable......
Yesterday I watched, the taxis, SAPASMA (the water company) and most other cars I saw ARE Nissan in some form or fashion. Hence the ability, I assume, to get parts. I owe great thanks to a friend who has lived here since the mid 50's for the advice to buy my car! It has definitely been a winner......

Peter, on the toll roads, when I'm going 80 people are flashing their lights at me and passing going well over 100~! DFers (people from Mexico City) are known for their fast driving~! The rest of the time on large parts of the roads, it is a straight drive with no other cars for quite a bit of time.
Think Autobahn.......

you think the city streets here in SMA are an "autobahn". The only person on the road in passing gear at all times.....

Ha Ron Stephens........and how many times have you had your car in the shop for body work? Look whose talking!