The Best Things in Life are NOT Things! 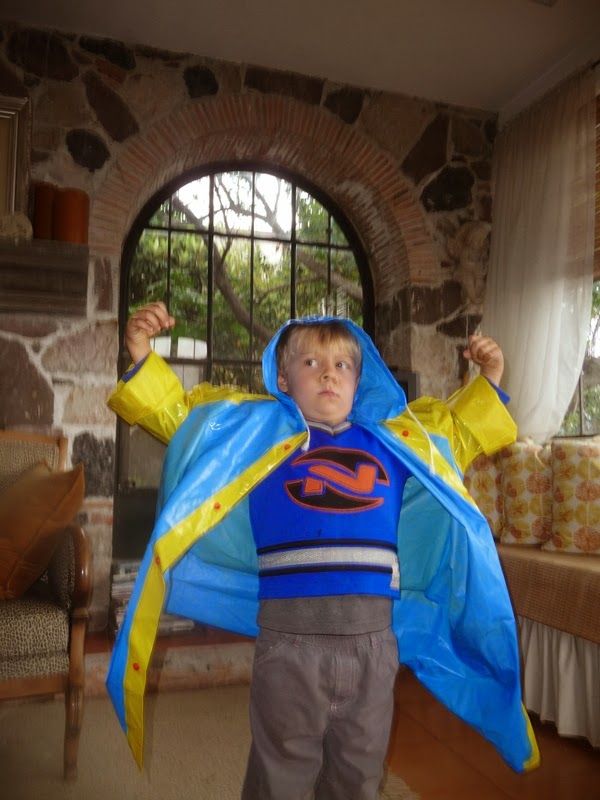 Yesterday I posted the above phrase on my Facebook page.  The photos here illustrate that point to the nth degree.  The grand kids came over yesterday.  Arriving shortly after noon, we played outside for a while until it started getting dark and raining. 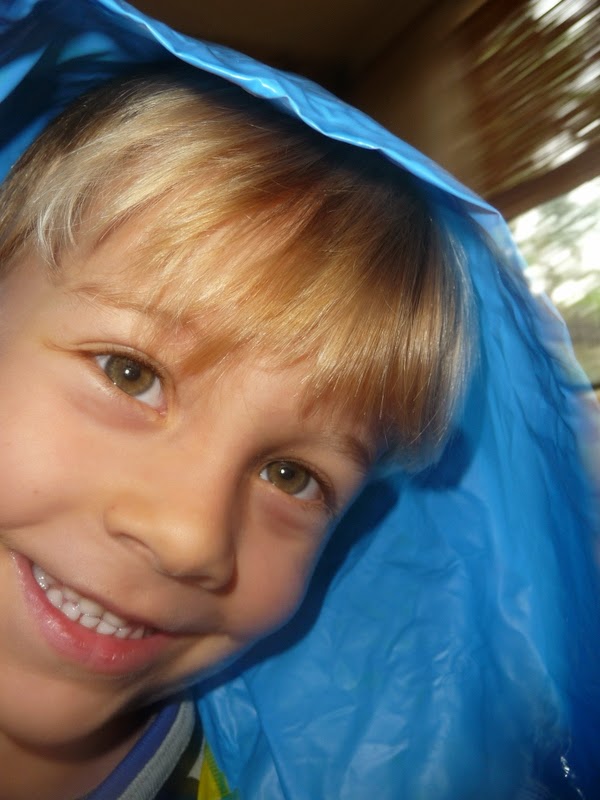 Sebastian and Matilda wanted to try out their new raincoats. And try them out they did, for sure.  Sebastian is such a little clown.  He makes me laugh frequently with funny things he says or silly things he does.  Reminds me so much of his dad at that age. 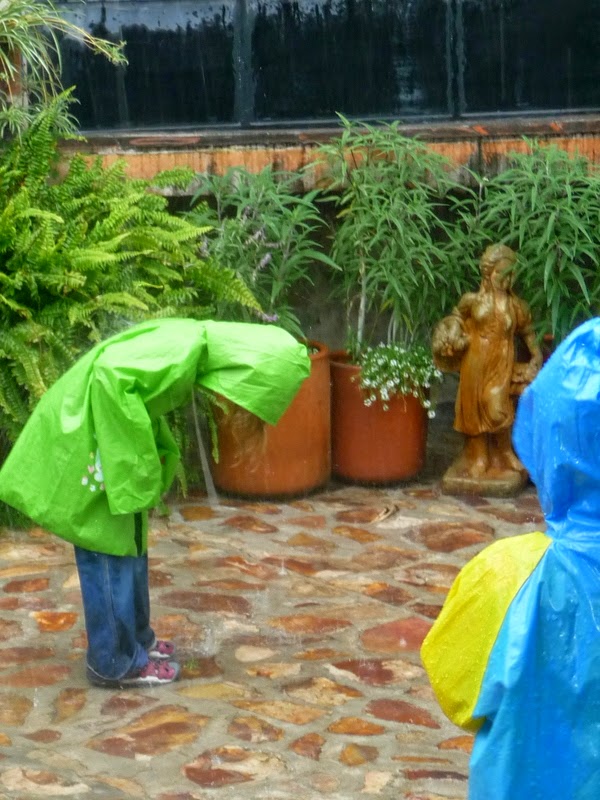 Out in the garden there is a drain called a "canal" in Mexico that takes the water off the roof of the guest house.  AND it really comes down like a torrent.  Matilda wanted to see if her new raincoat kept her dry by standing under the torrent.  Sebastian is carefully watching to see how that experiment works. I, on the other hand, am standing inside my kitchen door, not in the rain, taking these photos. 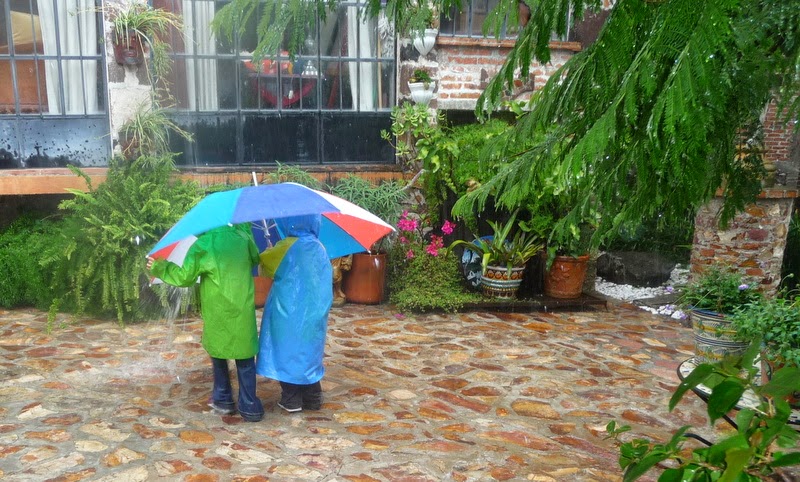 Then I remembered that my good friends Bill and Trey had given me a golf umbrella.  A huge thing.  THIS was the answer.  Under the umbrella, with their raincoats on they marched forward to hear the pounding of the rainwater on top of the umbrella. 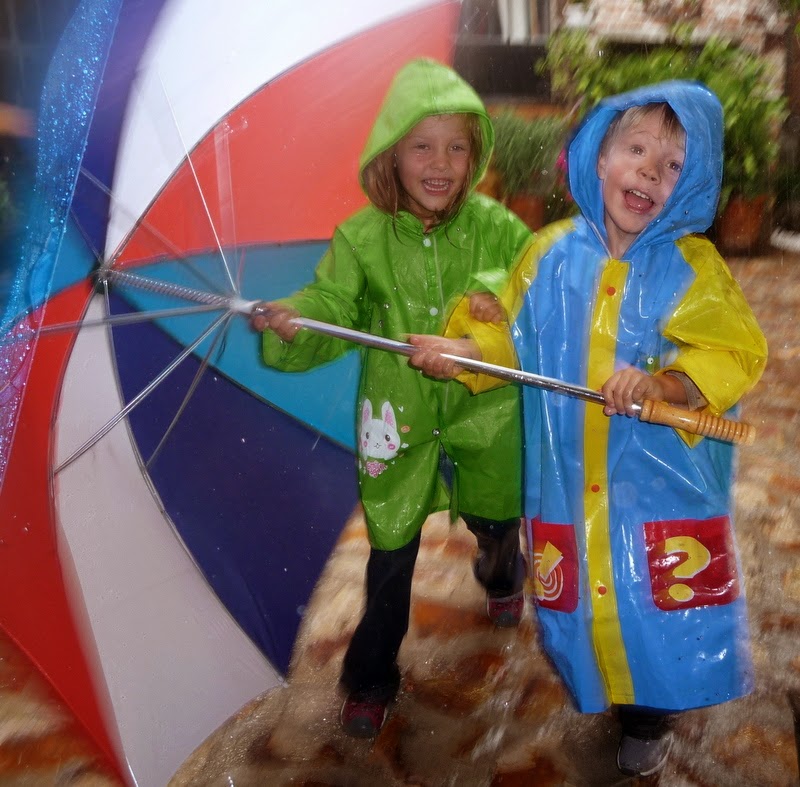 Was it fun?  Are you kidding?  These kids had so darn much fun in the rain that a day at Disney World would not have even compared.

Of course after they got back in the house, the clothes that were outside of the raincoats were drenched but towels, dry socks and a blanket solved all those issues.  A few snuggles and cartoons added to the afternoon of delights.

The kids had a blast.  Doubt they'll forget that fun time for a long time.
Posted by Babs at 10:28 AM

I wouldn't mind standing in the rain right now! I'm waiting for the monsoons. Those grandchildren are adorable!

How could you resist going out to show them a few Gene Kelly dance steps in the rain?

Those children are so adorable. Lucky you to have them close by.

Beck and Billie - They are indeed adorable. I love listening to the adorable things they say - at least when they're speaking English and not Spanish, ha.

No way I was going out there Billie! It was WET!

Great photos and great post Barbara. The best things are definitely NOT things!

Shannon - it's so true, isn't it? Too bad I didn't know that at an earlier age when I was spending so much money! ha......thanks for commenting.