The "Attitude" of Some Gringos in San Miguel de Allende and elsewhere! 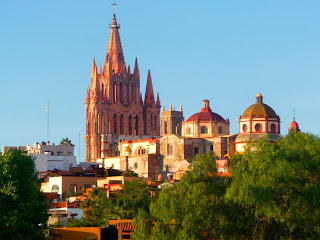 You could consider what I'm going to write as a rant.  So be it.  I've thought this for a long time
and today after a few incidents, I've got to comment.

Adopting an "attitude" of superiority, because you're a gringo in Mexico therefore you're entitled, is the wrong thing to do.

If you want to see how long it will take, waaaaaaaaay beyond manana, to get whatever issue it is that you're adopting that attitude about takes, just try it.

Sometimes I can hardly contain myself when I see, usually a gringo woman, be rude or disrespectful to a waitress, clerk or anyone else.  I know that they will stand there a long time..........a very long time.  You see there is more then one way to handle rudeness.  The Mexicans I know in Mexico are way more mannered then to yell back at someone or be snippy.  They simply do nothing.
I've seen it time and time again.  Even Federales at the border!

Last week several things happened that caused me to cringe.  I was on my way to Mega and had just begun to drive into the parking lot when I heard someone BLASTING their horn.  It kept blasting and blasting.  Everyone was looking to see what was happening.  There was a car in front of the blaster who was going slower then the blaster wanted them to go.  SHE, the blaster, swirled into the parking lot, screeched into a parking space and then leisurely got out and walked into Mega. I was horrified to see her car plates were from Texas.

Then I decided she had to be a tourist because you hardly ever hear a car honking in San Miguel.
It took every inch of my reserve to hold myself back from going up to her, tapping her on the shoulder and in a very nice voice tell her we don't blast our horns in San Miguel at slow moving Mexican cars.

The next incident was a group complaining about how Mexicans treat their dogs.  The conversation was about what they do and don't do that is wrong.  I again, believe it or not, kept my mouth shut.

On the Yahoo Civil List, commonly referred to as the Snivel List, complaints, complaints, complaints are written.  If it is something like a bad odor in town, people want to march to the Mayor's office and demand he do something before tourism and their property values are affected.  I wonder if they would do that back in the USA?  I think not.  They would go to the appropriate agency.

Many Mexican friends, in a very polite way, have expressed their feelings about the Snivel List. I cringe to know that they read that gibberish.  I tell them the majority do not support those comments.

Last, but not least, often the discussions are all about what is wrong with maids and gardeners.  The fact that when they stop using someone they have to pay severance and how can they get around doing that.  In those instances I get up and leave.  It's better then thrashing someone for their insensitivity to the people that work for them.

I write this because I've been told I always write nice things and never say anything bad.  As I enter my "wise years" (I like that term), I try to keep the negatives to myself.  However, one can only be silent for just so long.

Today I am not.

I agree with you.

It's enough to make you ashamed of coming from the same country...and I'm sorry to say one of my dearest friends I do not want to ever, ever visit me in Mexico, because she is of "road rage" mentality when it comes to so very many things, and the wonderful Mexican culture would set her off in so many areas.

Makes me shudder at the thought.

This is one of the reason I have so few Gringo friends in Mexico.....

Sparks, I wouldn't know how to do that!
Carol and Billie - THANKS>

Yes, Dean I understand. I am very selective about who I invite to SMA or to Mexico. Nothing worse then having someone with you who doesn't appreciate the beauty of the country.

Tancho - I'm very selective about who my friends are but once in a while, I get into a situation where there are people I don't know and I'm disappointed when the things I wrote in the blog happen........

You are so right. The Americanos come to Mexico because they love the slow, casual way of living, however they immediately began to complain about what's wrong and how the Mexican ought to change it. I say, If you don't like what makes you unhappy go back where you came from.

Gin, unfortunately I see more and more people move to Mexico, not because they love the culture or the way of life, but because they want an inexpensive place to live.
My observation is that those people are gone in 5 -7 years......if not sooner.

Thanks Christine - your sentiment seems to be prevalent

Well, even in annoyance, your post is civil and upbeat.

But I agree with you. Mexicans in general are extraordinarily polite, and we gringos need "do as the Romans do when in Rome," especially in a laid-back place like SMA. People generally have no idea that something we'd consider somewhat rude here NOB will likely be considered 10x ruder SOB.

Thanks for writing this.

Kim G
Boston, MA
Which can be a VERY rude city.

Thanks Kim - I always appreciate your opinion.

well, be it Afghanistan, Mexico, or the east end of Houston, I'm going to speak up about animal abuse.

Well, dear, even in anger, you are one of the nicest people I know.

But your points are spot on. I often chuckle at people who believe yelling (and honking) will get them anywhere in a culture based on avoidance of confrontation. But that would take a bit more self-awareness than some of our colleagues possess, I suppose.

Dana, why do you think I was talking about animal abuse? These people were talking about the fact that they don't pick up after their dog when it poops on the street.

Actually in almost 13 years, I've seen one kid try to kick a dog. That's the only attempted abuse I've seen........hmmmm.

I don't condone abuse of anyone or anything.

" ...because you hardly ever hear a car honking in San Miguel."

Odd that - in Xico and Puerto the horn is an essential device for any auto. They will run with burnt headlamps, taillights etc. But never do without the horn.

I will say there seems to be far less angry drivers SOB.

Interesting Calypso. IF we do hear a horn, it is usually on the weekend. Inevitably, if you look at the license plate it is from DF where I would think a horn would be as important as coffee in the morning!

Sadly, the "ugly American" is still as much of a reality as it was when the book was written.
The last time I was in San Miguel I saw a woman casually take a photo of a tiny, ancient woman sitting outside the Cathedral with great dignity, her little bowl resting in her lap.

The woman didn't ask, didn't even offer a coin; just strolled off as if she had snapped a statue.
In my young hippie days I would probably have grabbed the camera and smashed it on the cobblestones, I wanted to.
Instead I just walked up to her and told her calmly what I thought about her thoughtlessness.

She walked away looking utterly bewildered. She honestly had no idea that what she did was wrong; I'm not even sure she regarded the woman as a person.

I too would be tempted to let the air out of her tires; or some sugar in the gas tank. but really the most productive thing is to as unemotionally as possible, just make the person aware of their behaviour; sometimes it helps.

Apologies for the long comment, but this issue has been one for me ever since I began traveling to other countries. And the previous incident is minor compared to some I've witnessed.

Fredericka - It appears that I have hit a nerve with a lot of readers which restores my faith!

Well said... I had to unsubscribe from that snivel list - the majority of them aggravated me so much my tongue bled from biting it.

Thanks Gift Ship for commenting.
I looked at your blog and saw you had Red Envelope. Small world - my son was Natl Mkt Dir for that company in the late 1990's.