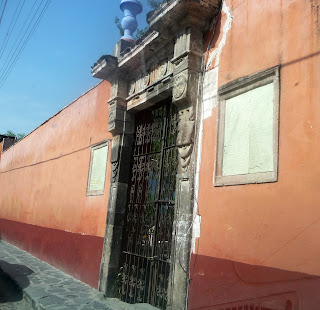 The tentative plans for the day were to go by the San Juan de Dios cemetery so my friends, Barb and Marks could see the oldest cemetery in San Miguel that I know about anyway.  Best laid plans of mice and men............note the padlock at the bottom of the gate with THREE locks on it.  Marks did stick his camera between the bars and get a few photos but no checking out the headstones.......unfortunately. 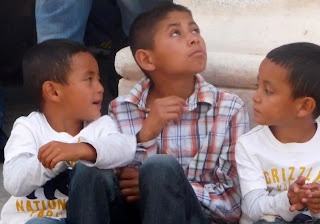 Off we went to Stop Two - Atotonilco.  People everywhere! The sound of music and singing coming from the sanctuary of the church.  I peeked in and what a beautiful sight.  Flowers everywhere.  The priest saying Mass.  The nuns and parishioners singing.  I got tears in my eyes it was so moving.
In all the times I've been to Atotonilco never has there been any service in the church!

Hence, I decided to take the time to photograph some of the children and people waiting outside for the service to end.  No one else could get in the church.  It was packed to the rafters.

The three boys photographed above were sitting on the stairs patiently waiting.  They waited and waited. 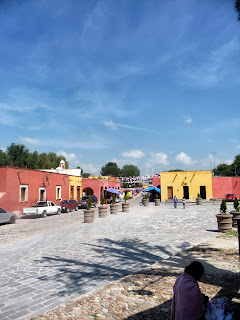 I shot a photo down the street to where the stands are set up to sell crowns of thorns, whips, all kinds of devices for self-flagellation.  This was the favorite penance of Fr. Alfaro who built the church. 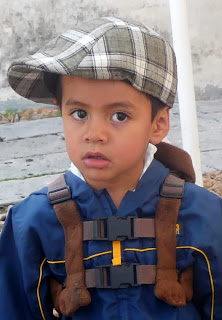 This little boy was waiting with his mother to enter the church.  He was so well behaved.  At one point his mother pulled a little bottle of bubbles out of her purse and the little boy's face lit up.  What a joy to see. 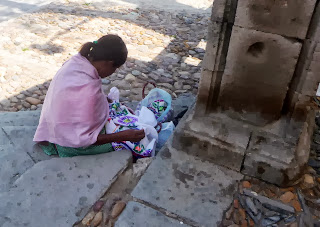 Always, always, it seems Mexican women are doing some kind of hand work.  Embroidery or crewel work.  The woman by the steps was no exception. 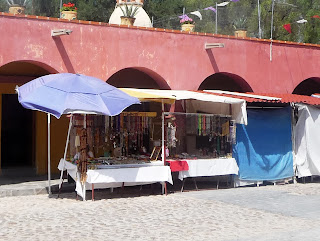 The lonely stand already open but no one to buy!  I know once the service ended that she was
probably busy. 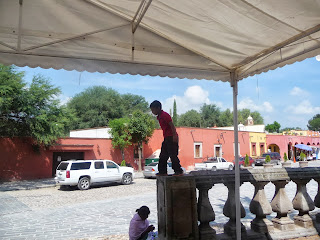 Two little boys found something to do to keep themselves busy.  Of course it had to be sort of dangerous.  They would climb up on the columns while their parents were in the church and see how far they could leap. 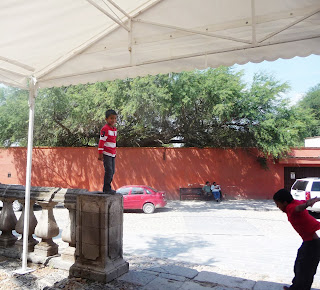 My heart leapt with each leap hoping no one would get hurt.  They would just grin at me each and every time they finished their dare devil tricks.

I finally asked if this was a special saints day or something since the fireworks in San Miguel this morning at 6AM were more then usual.

Someone came back and told me that no it wasn't a saints day but a visit from some nuns from a distant city that were being welcomed with this special Mass.

One knows in Mexico that the best laid plans of mice and men  can easily go awry.

One thing I love about Mexico is that plans have almost completely disappeared from my thoughts. Everything works better without them.

That is usually the case with me as you well know. But, with friends to take places some plans must be made. Whether they come to fruition or not is another story.........

What a lovely. And lovely pix. I could be wrong but I think the old cemetery at the bottom of Callejon de los Muertos is only open during the Day of the Dead festivals.

Donna, you are so right and that is the cemetery that I go to - I like it so much more then the big panteon.

Dana J - I saw that on the news. Actually they showed a photo of her when she was in her mid 30's that was the first photo I've ever seen that had a resemblance.....
I've never seen Easy Rider, maybe I need to rent it!

Well, it sounds like you managed to pack in an action-filled day anyway.

I'd love to see the old cemetery some day, though.

Kim G
Boston, MA
Where we occasionally wonder if there are more dead people than live ones.

Love all you photos of daily life!

Kim - Now that is an interesting thought.
Come for Dia de los Muertos and that cemetery will be open..........