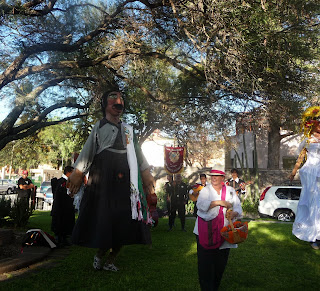 Two dear friends married in San Miguel last evening.  Linda and Robert.  They met in
Austin a year ago and love bloomed.  Now, both in their early 70's can't stop grinning with the happiness they feel at having met each other.

It was an intimate wedding at St. Paul's Episcopal Church with approximately fifty guests.
The rituals in the church gave no indication of the fun and frivolity that was waiting for us
as we left the church~! 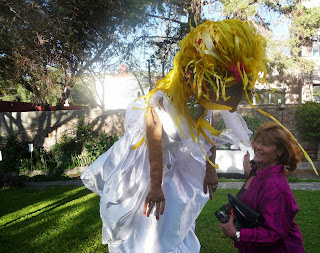 Waiting in the grassy area outside were mojigangas.  They are used at the beginning of parades, at parties and can often be seen in the jardin in the evenings.  We had a bride, a Mexican man and several others.  The costumes are worn by men which adds to the humor of it.  Look for the hairy legs in one of the mojiganga photos.  They love to dip at you when you get close as happened to me. 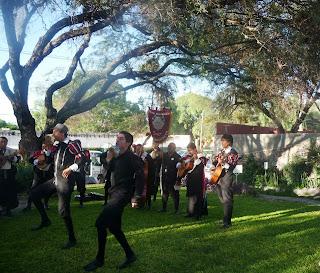 In addition to the mojigangas were the estudiantes playing traditional Mexican songs and music.  They serenaded on the grass then paraded with us all the way to our dinner destination. 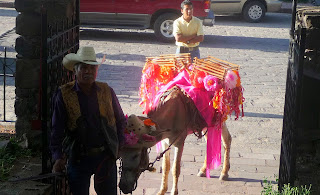 Another tradition is the burro carrying the baskets of little cups to serve tequila, along with the bottles of tequila.  As we exited the church, they were serving everyone tequila.  I declined.  But many began celebrating at that moment. 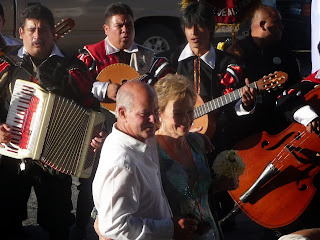 One of the most joyous things for me was to see Linda and Robert enjoying all the festivities as much as all their guests.  Here they are being serenaded. 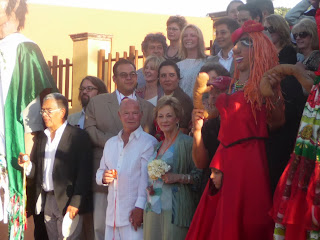 On our way to our dinner destination, we all stopped for group photos.  The mojigangas were
clowning around.  Quite funny. 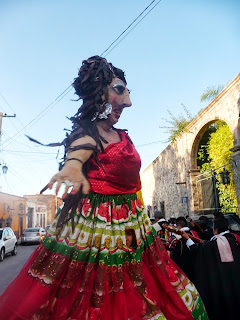 We headed toward Ancha de San Antonio which is a main north-south two lane road.  It is always crowded with traffic in mid day.  Friday evening was no exception.  However, we spilled out into the
street thereby rendering it into a one lane street.  Amazingly, people in cars were waving, smiling, taking photos and generally stopped and enjoying the festivities.

I thought to myself, "Would this happen in many other places in the world?"  What fun.
Even the bus driver was waving! 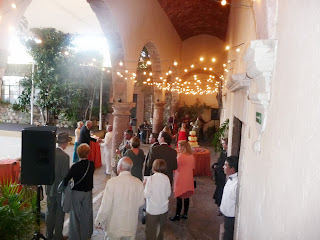 We arrived to the Instituto for a delicious sit down dinner of
arrachera, rice and beans with little tomatoes, appetizers galore and open bar.
The service was exquisite as were all the beautiful flowers and table service.

Often during the dinner, "Besos, Besos" would ring out throughout the dining room.
The bride and groom would gladly kiss for the enjoyment of all.

More musicians were playing for us prior to dinner.
Of course after dinner, the chocolate wedding cake with white shaved chocolate
was served along with champagne.

The party ensued with dancing and many toasts. It was, without a doubt, the most
delightful wedding I have ever attended.  Mexican customs made it so joyful and surprising a long with seeing so many friends of many years. 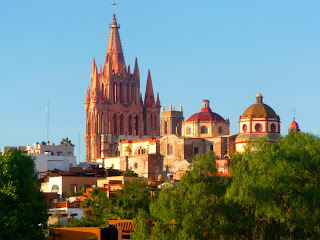 The time of day was perfect to get a wonderful photo of the Parroquia along with all the accompanying religious buildings behind it.  It was just another breath taking moment
of the whole exciting evening.

Beautiful! I can just imagine all the color and flavors. Best Wishes to the bride and groom. Oh, to be a fly on the wall and watch all the festivities but having your fotos was the next best thing.

This is exquisite! Oh thank you for the peek into this wedding. What a beautiful couple! It almost makes me want to get married again and do it in San Miguel.

It was a heartwarming and visual delight Billie.

The mojigangos reminded me of your and Ned's anniversary at Rick and Deb's!

IF I were to be so lucky as to marry again, it would be here or Mackinaw Island or on a beach somewhere.

San Miguel is becoming a wedding destination site for sure.

Wonderful photos Barbara,it must have been a very special day!

Looks and sounds like a wonderful wedding. May their future years together be as happy and festive as that fine day.

Kim G
Boston, MA
Where we have yet to attend a Mexican wedding. Unfortunately.

Shannon, it WAS wonderful and it DIDN'T rain!

Kim, I've been to other Mexican weddings that were also unique but nothing like this........just a wonderful memory with great people.

Thanks for including us........so vibrant, the scenes. Do they now live in SMA or was this a wedding destination for them?

Linda has been here as long as I and Robert is now a resident of SMA as well.
Linda has a special events business here.

I don't think that wedding would be possible anywhere else.
Would love to see some video clips of the festivities if they post online.

Thanks Rick, I AGREE with you. Although the bride is a wedding planner and special events planner.
So come to SMA, let her plan a party for you and have FUN!

These are the wonderful memories of Mexico that must be shared! We feel so privileged when we happen across one of these celebrations.

So true Croft! It's always something here. I never know when I turn a corner what to expect. It's FUN!