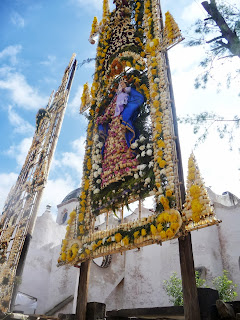 Typically when I go out to Atotonilco to take someone to the Sanctuary, we are just about the
only people around other then the people begging in front of the church.

Not the case yesterday as we rolled into town.  Quite a few people wandering the streets and many in the church.  The celebration of the consecration of the church is held on the 20th of July each year. So a celebration had just finished this past weekend.

The church was consecrated in 1740 and completed in 1777.  Hard to believe something this large and elaborate was completed the year after the Declaration of Independence was signed in the USA. 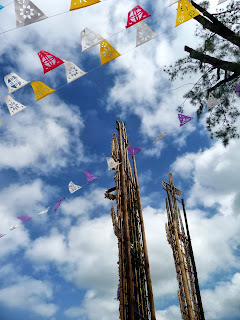 Okay, someone has to help me here.  I have drawn a blank on what the large (and I do mean large)
pillars of honor of the Virgin and others is called.  I have not been able to think of the name for at least two hours.  It's driving me nuts.  It begins with a "c"........Help? 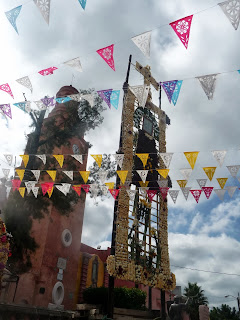 When used in the processions in San Miguel, I don't think they have ever been this tall.  It takes about ten men in San Miguel.   These I can't even imagine.  They are at least thirty feet high. 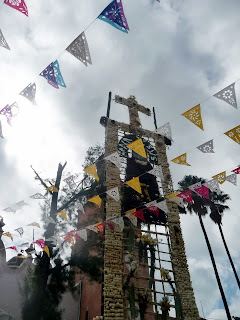 Each thing on these tall poles is symbolic.  Reed from the river near Huertas is used.  Dried flowers.
Orchid paste and other dried items.  Someone fill in the blanks.

I couldn't photograph the interior of the sanctuary. No flash allowed. Flowers were everywhere.  Magnificently beautiful.  Besides the amazing frescoes, the wooden floor just always touches me.
You wonder about all the feet that have crossed it and the history it has experienced.

It's extremely unusual to see a wooden floor in this area.  The only other place I've seen this in the area of  San Miguel is the home that Santa Ana stayed in on Mesones.  It too is quite beautiful.

I love that you just never know when you roll into a town in Mexico what you're going to see.

The carnival was on the outskirts of town.  I might have to drive back in a few days to see what is going to happen next........in Atotonilco.

Castillo? And that celebration is HUGE.

Castillos are the round fireworks that go off..........I guess I'll have to get out my books and figure it out. Thanks though.