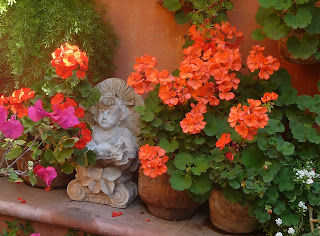 Thirty-five years ago today, my husband died.  It was sudden and inexplicable.

It's not hard for me to remember the day or the events as it was such a shock.  The days following are a blur but, suffice to say, my children, who were all teenagers at the time and I survived.

To me, that is a miracle.

I had no idea what I was doing a lot of the time.  I was motivated out of fear.  Fear of making a mistake.  Fear of not making enough money.  Fear of not being enough for my kids who were 12, 14 and 16 at the time.

It was a rough road.  We created new traditions and remembered the old.  We moved to another house a year later, which helped, and treasured the memories from the other house.

We bumped into each other in our grief and in our sorrow.  But, more often we held each other and kinda grew up together, to be honest.

Ten years later someone commented that I was so brave.  I said, "What choice did I have?"  Really?
To me the kids were the brave ones.  They trusted that I would make things right in whatever way I could.  They were my life and we did do lots of outdoors stuff.

We camped in New Braunfels.  We rented a house in Wimberly several times on the Blanco River.
Of course we were in Galveston every year for at least a week, on the beach, searching for sea horses, sand dollars and whatever else we could find.

We did the simple things that would allow us to be together.  Even now when we get together, those are the times we reminisce about.  Simple times.

I look back now and shake my head.  It's the biggest surprise to me that I never remarried.
It's a good thing I didn't know that that was my path thirty-five years ago or I would probably have died of fright.

Somehow one always find the strength to get through hard times.  It's only after the fact that you look back and say "How?" and "Wow!"

How? and Wow! indeed. I find it hard to imagine how you got through that. Although I'm sure the kids were wonderful to have with you at that time, you must have been terrified to suddenly be responsible for 3 teenagers all alone. In times like that we do what we have to do, but that doesn't make it any easier!

Having the kids gave me a "purpose" and a reason to get up every day and be the best I could be........It wasn't easy, especially the financial part of it, but somehow it all worked out.