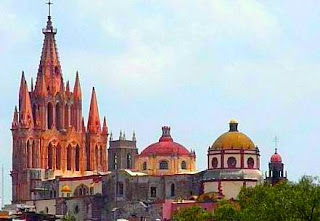 Thousands, I do not exaggerate, have read the post written on July 7, 2011 entitled
Cost of Living in San Miguel de Allende, Mexico.

I've been thinking for about six months that I should write an update since a few things have changed.
I'm finally getting around to it.

First of all, rents seem to have increased.  It's getting harder and harder to find a one bedroom for $300US that all bills are paid.  Most rents are now, at the bottom end, over $500US a month plus utilities.

Heck, that is still such a deal.  We're talking furnished.  Usually maid service is provided at least once a week by the home owner in that rental fee.  Utilities in  nine of the twelve months are not much.  However, in the winter, if one is using electric space heaters, your bill can inch close to $200US per month for approximately 1000 sq. ft.  That has been my experience. You're better off renting a place with utilities included in the rent.  Then all of it is handled by the owner and you have no hassles.

If you don't want Mexican cable TV which is only 340 pesos for TV plus internet, then you'll pay close to $80US for Canadian satellite TV with approximately 120 channels.

Food is still relatively inexpensive unless you want American brands that have been imported and then you'll pay a pretty penny for those items.  Like Tilamook cheese, Johnsonville Sausage, Kirklands Cashews and many, many more items.

It seems when you're away from the USA the nostalgic factor is part of the equation.  I remember once when they had okra, sweet corn and russet potatoes at Mega - a large grocery chain store.  There was a run on the store by the ex-pat community.  Quite humorous.

Actually for the okra, I was known to head there the minute I heard they had some in stock.  THEN I found someone growing it in a small garden.  Voila, a ready supply once a year.  Happy days.
See what I mean.  In the states I never reacted in glee.  But, here, when we can't get so many things such as crookneck squash, purple hull peas, crowder peas (can you tell I'm a Southerner?) and corn meal mix to make cornbread, we are happy when we can get something we love.

Therein is something to remember.  THIS is another country.  Often more then not, you won't be able to find the brand of something you're used to and you just have to learn to substitute or, as many do, make a USA list for those things that are not available in Mexico for when you head back once in a while.

Back to the costs.  Gasoline has gone up but not as much as in the USA.  The movies is still so inexpensive as to not be believed.  About $2US.  Reproduced DVD's of movies are $3.20 each.
And, if you read the post written in 2011, you'll learn how to never pay retail again for clothes.
Name brands!

Besides the changed income requirements, the addition of Resident Permanente, which will now be REQUIRED after four year which it was not previously, one may not have a US plated car as a Resident Permanente.  At least that is what some are saying.  Although Aduana has not issued firm regulations yet.  They are the agency to oversee vehicles and permits in Mexico.  It's a mess.

IF you are thinking of coming down to "check out San Miguel" as so many are who write to me, I say come on down.  You'll get a Tourist Visa and must get a Temporary Import Permit for your car either at the border or at www.banjercito.com.mx   It takes a few weeks on the internet whereas it takes about 15 minutes at the border as long as you have a clear title to your car in your name and a credit card to pay the deposit to bring your car in (you'll get it back when you leave the country).  The max the deposit can be is $400 and the lowest is $200 based on age of vehicle.

All of this is easy and painless and you don't have to prove income or anything else.  In fact, there are those who have lived here for over 10 years on a tourist visa.  They go back to the border at least every six months and therefore bypass all this mumbo jumbo.

Please don't get the wrong idea.  San Miguel is still paradise, as is most of Mexico.  It's a "live and let live" culture of graciousness and kindness.  San Miguel is full of fascinating people who have lived world wide along with interesting activities and incredible weather.

Just read all the many articles that have been written in so many publications in the last six months to get a sense of the place.

My intention in writing this though is to let you know that it does take more money now then before although, in my humble opinion, not near as much as it takes to live in the USA.  If I had to give a percentage it would be 50% less then the USA.

I have had no regrets during my 12 year adventure of living in San Miguel de Allende.

Let me be the first to comment WITHOUT that terrible 'are you a human' process! Thanks for making the effort - I will take advantage often ;-)

YEAH! I've wanted to get rid of it for eons but didn't know how. Thanks so much for the info Calypso.
I'm sure there will be many who will thank you too........

Steve, Salem must be a very inexpensive town then. I can't imagine that your costs are 80% of US costs. Maybe because you had to pay rent in Melaque and owned your home in Salem?
Melaque is SO inexpensive that it is hard to believe. I'm sure I could easily live there on less then $1000 a month. In fact, I KNOW I could!
Que pasa?

I so appreciate you talking about the cost of living there!! Thank you so much. I'd enjoy hearing the approximate costs of renting an unfurnished place. I'd be more inclined to do that and make it home over time (I think of yours when I say this). I imagine those deals can be even better?

I have heard that unfurnished can mean no light fixtures, appliances, etc. but that would be okay, we'd not mind providing them as we'd intend to rent long-term.

And to clarify - do you mean that, still, one can live there on a tourist visa, by crossing the border every six months? Seems that would be the way to go for many.

Thank you again!! And by the way - I'm one who's read and loved your blog for years and has never heen able to comment. How nice that I can now.

Dean, yes the 6 month route, except for the long drive and having to stay overnight to reenter is an option.
For some reason there are few unfurnished apts, casitas and houses!
I rented this furnished (actually bought the furniture from previous tenants) and then disposed of what I didn't want.
It's extremely costly to move furniture down here and until 1987 you couldn't so that might be the reason most places are furnished.
Plus, since there is a lot of tourism here, most people come for short periods of time. That's the only reason I can figure that they aren't furnished.
Most people when they move back to the USA don't spend the money (still a lot) to move everything back hence, furnished places. Some landlords will store the furniture in the place if you are renting long term. Each situation is different. You'd just need to come down and see what is available at the time you're looking.
Our high season is Nov - April and just about everything is rented then.....so its best to look for a place long term here in May-June when hardly anyone is here!
Hope this helps......Thanks for posting.

It's folks such as yourself that are worth their weight in gold. Again, all you share is so very much appreciated!

Dean, glad to be of help. Let me know if you're heading this way and if you have more questions.

Unknown said...
This comment has been removed by the author.
12:53 PM

Unknown said...
This comment has been removed by a blog administrator.
12:55 PM

Thanks so much for this info. Very interesting also that the residency requirement is $2400 - I have been researching Central and South America and Belize is the highest so far - but well under $2400.
We are retiring this year and looking to leave the US (NC) - I've extensively researching C & S American as I mentioned but until the past couple of weeks completely left out Mexico - curious - not sure why. Now I am very interested.

There are many reasons why I ruled out Costa Rica, Panama, Ecuador and Belize. One was distance. I like that I can drive to the border in 9 hours if need be.....I've not regretted being here for 12 years.
There are ways to get around the $2400 requirement.
If you have more questions, feel free to write to me at babsofsanmiguel@yahoo.com. BTW, I love North Carolina and have traveled all over that state.........