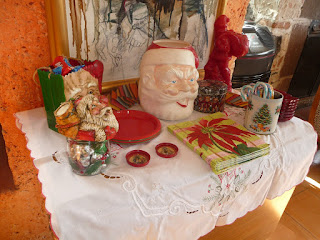 Last year I put the Christmas decorations up for the first time in ten years.  I decided to do that again this year in hopes that Matilda and Sebastian will get to spend Christmas time here.

So many of the decorations that I have out have a story.  From the little lids that I decoupaged in the late 70's, as seen above along with that Santa cookie jar purchased in the 70's, right through to the current time.

Although I haven't bought a new decoration in eleven years, with my house so small, its not necessary.  In fact there is a huge bin in the bodega full of more stuff!

The paper chain that is draped on the table behind Santa was made by my son John about 45 years ago when he was in kindergarten.  I love laying it out and remembering. 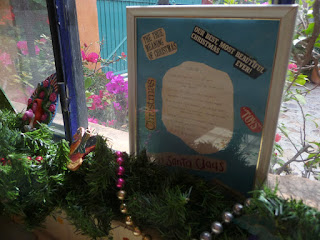 This framed letter to Santa and to me was written by my daughter Julie in the 80's.  Again, I treasure it and love to remember how thrilled I was when I unwrapped it on Christmas morning.  Julie is so creative and was coming up with clever ideas way back then! 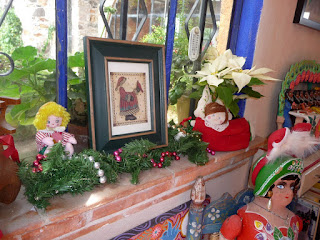 You can only see the tip of the nose of the reindeer on the far left.  They were made by a man who lived in Houston who made dollhouses for both of my daughters and made precious furniture too. 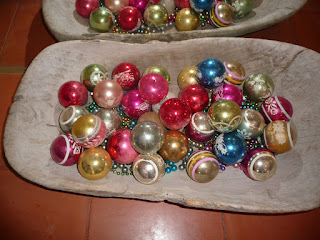 All the ornaments are from the 50's and earlier.  They were my parents.  I might have added a few to the mix over the years but the majority were hung on the tree by me and my little brother when we were little.  He, my brother is now 65; I am ageless!  ha. 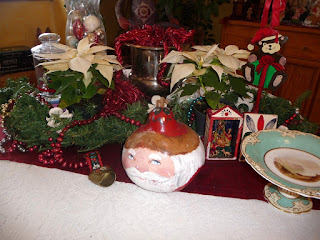 The hurricane glass behind the poinsetta is full of ornaments from before the 50's.  The Santa and many other decorations were painted by a dear friend Beverly Gale who I met in the late 60's and was a dear friend until I lost touch with her about 8 years ago.  I miss her terribly.  She is such a talented woman. 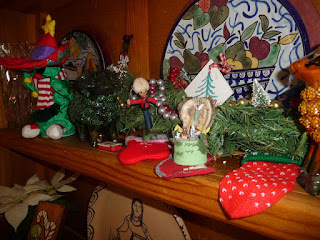 The teeny tiney nativity scene with the oyster shell as the background was given to me by a very talented young architect who worked for me in the 80's.  He died shortly after that and I treasure it so much that I have it displayed all year long.  The little drummer boy is from the early 70's when I used to make a special tree for each child each year.  One year John's tree was drummer boys made from clothespins and cotton balls. 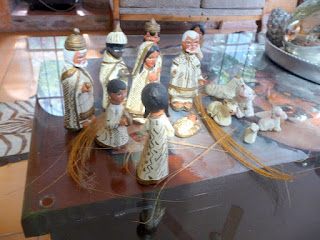 Ah, this Nativity scene was purchased in Mexico City in 1974 on my first trip to Mexico.  I knew on that first visit that I would some day live in Mexico! 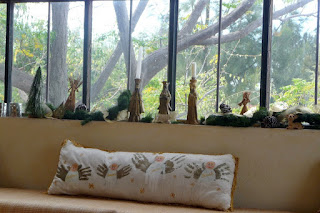 If you look closely at this angel pillow you'll see that instead of it being angels, it is actually handprints!  It is the four handprints of Julie and Rich's children - Jessica, Hannah, Andrew and Emma.  So clever.

Last but not least, is the gold lame' wings and the fuzzy antlers that my dog Flash wore for most of the 16 years that she was alive.  She's been gone for eight years.  I still get a lump in my throat when I pull these out of the box.

Merry Christmas everyone!  I so hope you have things to bring back memories of your past Christmases with loved ones.

It's funny, I just published the same post......only without the depth.
What an amazing mother you were, your kids are very lucky.
What an incredible collection of memories!
I, too, had all my parents old Christmas decorations, but they went, along with everything else I owned, when I moved to Mexico. Maybe if I had had those kinds of memories I would not have given them away.

Wonderful Christmas stuff, and so lucky that your brought it down to Mexico.
Lately all I see is 99cent store decorations just arrived from China.

The mini nativity scene in the oyster shell is wonderous.

I so agree Dana.

Yes Rick, I so agree. I gave some things to both my son and daughter. A whole Santa collection which I used to put up is now set aside for Matilda and Sebastian. Angels are in Houston- the fun thing is that when I go to visit I see more memories!

Shannon, I just realized that my post to you must have been on your own post. Lordy, I'm losing it! We did write very similar posts! Great minds think alike.......