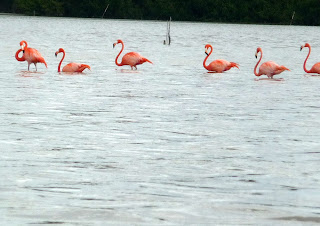 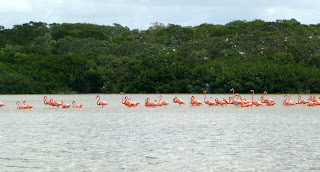 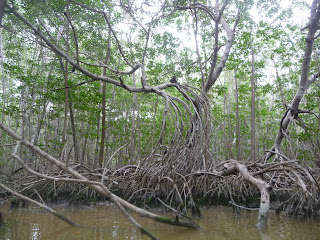 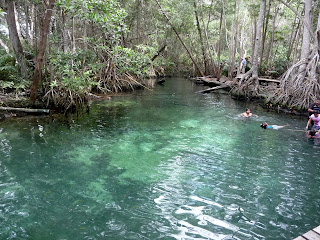 On my list forever has been Celestun. The place where tens of thousands of flamingos hibernate during the winter months.
The biosphere area is 147,500 acres of both freshwater from the estuary and salt water from the Gulf of Mexico. Over 200 species of birds migrate here. We saw terns, egrets, herons, loons, comorants, Canadian white pelicans, a coastal blue heron - you get the idea. The list could go on and on. We saw all of the above in about an hour! Quite spectacular.

The show stopper and boat stopper were the flamingos. The boats don't get too close as the guides realize that they don't want to startle the birds. So we idled along "oohing and aaahing" at their beauty both while standing in the shallow water and then flying with black markings on their wings. Awesome.

The mangroves line the body of water. When we came to a small opening, we motored in, docked and walked around looking at this otherworldly, important natural resource. Our guide said that the birds come into the mangroves at night for protection. However both the people swimming in this shallow area and possibly the flamingos might not be aware of the crocodiles we saw nearby....... Yikes!

Salt is produced in this area. In fact they were producing it prior to the Spaniards. Additionally octopus are "hunted" in the waters of the Gulf that is nearby.

Celestun was one of the highlights of the trip for me. Even the journey to get there was a delight. I'll share photos of that tomorrow.

You just added another "to do" on my travel list.

Steve - it is a 1 1/2 hour bus ride from Merida - but another world both on the journey and at the destination!

Those flamingos look just like the plastic ones I have seen stuck in peoples lawns - Babs are you sure those were real flamingos? ;-)

Beautiful photography. You're very good with that camera.

Thanks Mic - its the camera not me. It's just a point and shoot digital!

Calypso - Flamingos are near and dear to my heart after planting them (the plastic ones) in friends yards and having the planted in mine - like 50 of them! But two of my best friends topped that - they LIVE on Flamingo Lane on Galveston Bay - wish I could say that......