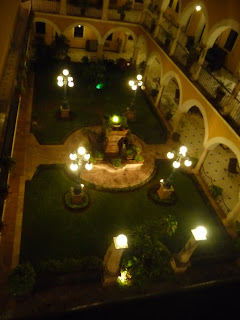 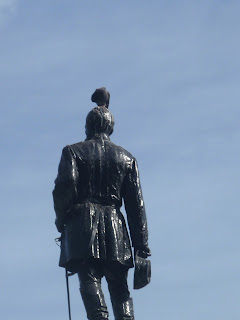 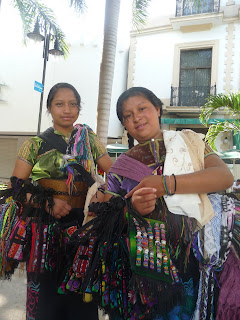 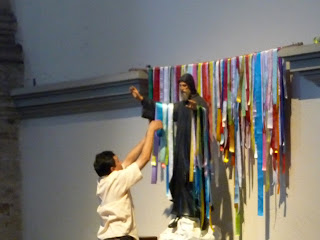 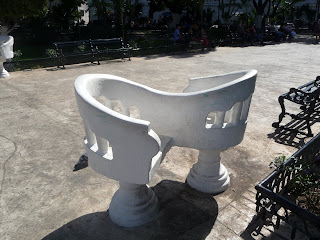 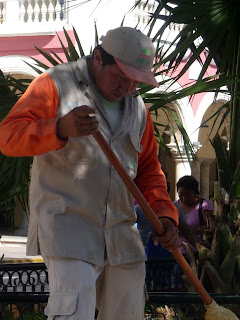 I will start this post by saying I purposely used this title so someone can explain to me WHY Merida is called "the White City". I don't get it, as even the Governor's palace is green! Most of the buildings are pastel colors........

But, be that as it may, I spent almost four days there - always in the centro and didn't, other then when on the bus, get to see much of the city. The reason - the heat! Lordy mercy it was HOT HOT HOT. "Houston in August" hot. Need I say more? Other then that I wasn't prepared for that and wilted like a proverbial flower. Whew.

Our hotel, Hotel Caribe, could not have been better located since it was only a block from the main zocalo. The open courtyard was lovely. This photo was taken upon arrival. It set the tone for the time in Merida as a colonial adventure.

There was a sweet, lovely little plaza right in front of our hotel. Even though there was constrution going on with tile cutters and relaying of bricks, I "zoned it out" by trying to sit out there for a bit in the morning when there was still a cool breeze. The photo of the bird sitting on top of the statue was fun to see - at least to me. As one sat in this plaza, of course, the vendors came by to sell things. Imagine my delight when two young women from Chiapas came selling goods from Chiapas. I noticed their skirts which signified that they were from Chamula, a village near San Cristobal. I had visited there a few years ago. Commenting about that elicited great smiles and conversation. One young lady only spoke Tzotzil, a Mayan dialect I believe, but the other spoke Spanish. I saw them three mornings in a row and enjoyed our interaction greatly as I think they did also. LOVE this photo of them.

There is always something that touches my heart when I travel. It can be such a little thing - a gesture, a smile, or something such as the sacredness of this man hanging a ribbon on a statue of a monk who is prayed to for intercession. His act stopped me dead in my tracks that morning in the Cathedral. It said to me Faith, Need, and Hope. I asked our guide who was this man who had a statue of himself in the church and he said a monk that had taken on significance for the Mayans. I can't even remember the name of the monk, but the man putting the ribbon on the statue is the image of the trip for me.

As we walked around the main zocalo, which is very large and beautiful with exquisitely large trees, I noticed these courting chairs. Never have I seen them anywhere else in Mexico. However I saw them in other places in the Yucatan also.


As I'm so blessed to get to walk around and enjoy the sights, the sounds and the pleasures of a vacation, I'm also aware that there are people who work day in and day out to to make sure that the tourists and travelers have a pleasant time.
The last photo of the sidewalk sweeper also touched my heart. Does it touch yours? Such a beautiful face. He should be a Mayan God, not a sidewalk sweeper..........maybe he is.

My understanding is that when the Spaniards took over Merida, everything was painted white. I don't know if it was the limestone or paint. I am so glad you were pleased with your visit to the Yucatan. I think it is one of the vastly under rated states in Mexico. Just because it has no hills nor above ground water doesn't mean that it is not without its' charm. Glad you recognized that.

Years ago, a friend who lives in New Orleans visited Merida. He said the heat was beyond belief, and this coming from a New Orleanian, which has heat worse than Houston, I promise. It's more humid.

It surprises me that people actually choose to live there. It's a real puzzle.

I hear it's pretty though. Never been there.

I never gave Merida a second thought until I visited there on a fluke a few years ago. Once I got over the flatter-than-Kansas landscape, I found it enchanting. The architecture was fab, the natives hospitable, the public IQ at a decent level, the food good --- but I could not, could not, absolutely could not understand why intelligent people would opt to live in such oppressive heat. And I was there in December.

Jennifer, you have summarized my feelings and impressions exactly. In fact, the heat made me ill on Sunday and I had to beat a hasty retreat to my hotel room where I spent the day in the air conditioning.