Stopping Me Dead in My Tracks! 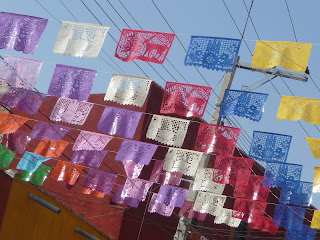 I ran into someone recently who has lived in Mexico for several years. In our conversation this person said, "You know I have a really hard time relating to the people of Mexico because I feel that their culture is so inferior to ours in the USA".

You can imagine how hard I had to fight to control my impulse to knock this person to the ground. I took a deep breath and commented that that was a shame and that possibly it would be helpful for this person to become educated about the history and beauty of the culture. A blank look came back to me.

Then, in an attempt at being civilized, I told him several stories of why I feel the culture is gentile and far more cultured then the US's because of many reasons. One being the longevity of the culture versus the USA's. And then I began to tell this person of many stories to illustrate some of these things that I have personally experienced.

Those comments have rolled and rolled around in my head for several days. It is beyond my understanding why someone would live in a country that they didn't respect the people. Much to my dismay, this person isn't the only person I've come across who issues forth with the same old, same old statements about crime, corruptness and uneducated masses.

It somewhat reminds me of growing up in Louisiana where the same old things were said about the blacks. I don't understand why some people have to feel superior over another group of people, whoever they are.

Can't we all just get along? What happened to learning about other cultures and embracing the differences and learning from them. Sheesh, it drives me crazy.

Welcome to Arizona. Oops, you're in Mexico. But seriously, I've noticed that trend here in the U.S.. Those views are being encouraged by some politicians and news outlets in order to garner votes, using ignorance and hate in an effort to divide and conquer. Sad.

Yes, for political gain to me is more then disgusting.......

We have equal problems in the US...we just hide them better.

I run into those types here too, I wonder why they stay. Sometimes it is financial but in other cases it almost seems as though they enjoy feeling superior. They are really tough to be around, I can't remain polite for very long.

Some people seem to be insecure and somewhat paranoid. What a pity! There's a whole, exciting world out there!

Funny you should mention this. A few days ago I was sitting in my usual coffee place when a group of 4 NOB individuals were discussing stuff. One couple could not believe the "social conditions here in Mexico." Especially with the children. This was the conversation as neatly dressed and uniformed children were passing by on the street going to and from school.
I figured it was hopeless to say anything to them, since there seemed to be a problem with their eyesight. I don't understand why people come down here and try to instill their social standards onto the scene.
One of the couples was from Arizona if that means anything.....

You deserve credit for trying to give a friendly rebuttal but narrow-minded people rarely change their attitudes. Failure to appreciate México is their loss. Ni modo.

I'm glad to know I'm not the only one irritated by these kind of people. And, it is irritating.....
But, as Paul says you're not going to change their mind.
To that extent, I was irritated by the irrational state department warning about spring break. Their broad brush approach of naming all those states is so unjust and such a travesty. All of us down here travel around and through those places. As long as one isn't a drug dealer, you're fine. Yes, 120 Americans died in Mx last year out of the 2 MILLION who visited. And, I bet if someone checked on those 120 there would be a high percentage who were involved in risky behavior.......just saying. Ok, now I've said THAT and gotten THAT off my chest too.

I had a neighbor in Honduras who was from the US. He ran a large ministry here. He once told me that Hondurans could never be entrusted to operate anything here independent of US help. They were too lazy. And I am not that surprised that he left abruptly a few months ago. And all those lazy Hondurans are carrying on his work without him.

Good gosh Laurie! And someone with a ministry. Good riddance to that person.

Ay ay ay. Que triste. I havent been here long enough to really run into any expats (6 weeks!) but I hope I dont have to have that conversation often. Good for you for keeping your cool but also sticking to your guns. I have always been a little hotblooded when it comes to prejudice - saw enough of it NOTB and frankly dont want to deal with it here!

Am enjoying your blog!

That makes 2 of us that are hotblooded to when it comes to prejudice...........WELCoME! And, glad you enjoy the blog.