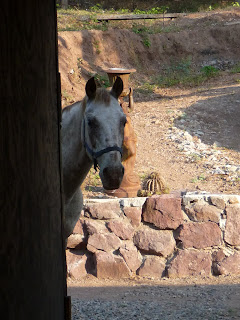 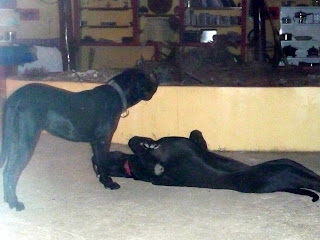 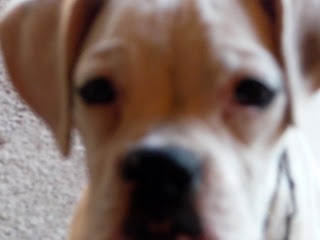 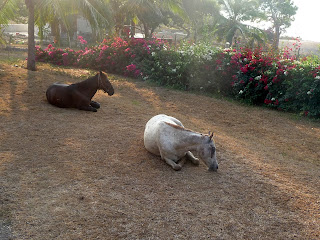 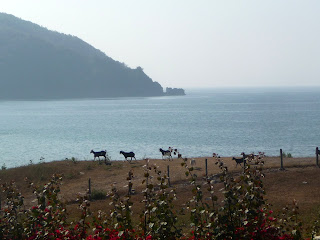 In this "other world" that I was in for over a month, the animals roam free - even when they aren't supposed to. It was a little disconcerting at first. If they didn't come in by dark, I wondered and worried a bit. But then I found out they always came home. Either for water or food, eventually.

Paloozo, the horse would either wait by the patio or stick his head in the back door for me to either feed him a daily carrot or an apple. We soon became friends.

Friends had two of the biggest dogs I've ever seen. Fearful looking at first, but look how they played with each other. They were just big babies.

The little white boxer puppy Blanca, who is now four months old, loved "adult beverage time" every day as I always gave her an ice cube, or two. Here she is patiently waiting.

I had never seen a horse lay down and use its head to rest on. Paloozo made me laugh out loud at this behavior. The brown horse is the neighbor's, but the two horses are inseparable. Grazing and resting together.

Last but not least the goats! They made me laugh daily. A neighbor farmer faithfully drove his four-wheeler to his adjacent land every morning between 7:15 and 7:30AM to check on feed for the goats, the herding dogs and other animals on his property. I presume he also checked to make sure the gate was closed. But within an hour or two of his departure in the morning, here came the goats. They ignored the herding dogs. Completely. Their leader was the goat with the bell. If she walked to the cliff edge, they followed. If she went down to the beach, there they went. Even the little hobbled one. Even funnier, though, was that these goats wandered all over the place all day. Somehow they knew when it was close to 6PM and the return of the owner on his four-wheeler to check on them. I presume he came to feed them because they made a beeline back to wherever they came from before he got there and he was none the wiser. Clever, weren't they?

Interestingly, none of the animals were bothered by the antics of the others and they all seemed to live in peaceful harmony with a "live and let live" attitude. A good lesson, don't you think?

Nice post. I know that animals can tell time but how do they do it? The getting the act together before the boss shows up must be a mammal trait.

Norm, it was a gift for me to have the time for observation of all of these events! Likewise, my cat Velcro has become quite a character to watch. When the kids were growing up and I was working, I never had time to watch the many pets we had other then putting a food bowl down. Or petting them.
It truly has been fun to have time....