The Path to Paradise 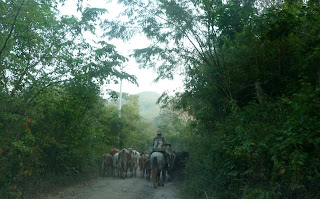 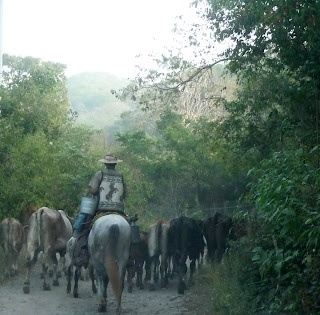 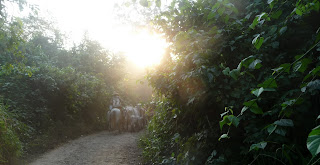 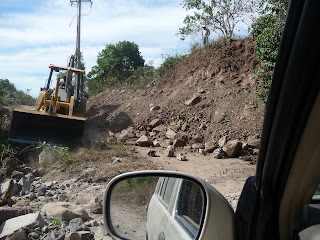 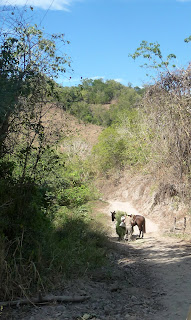 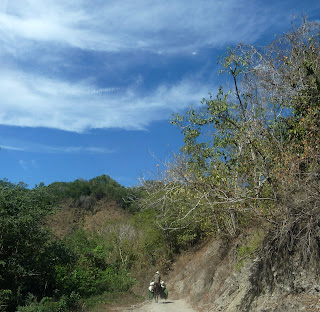 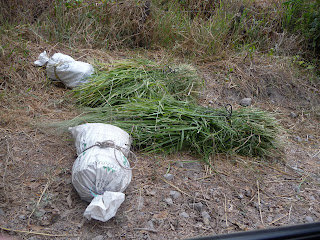 The "path" is little more then a cow path with ruts, dips and dives, arroyos, and large embedded boulders in the road. No place for a lady with a Pathfinder. But, there I was many days heading one way or the other to either get to paradise, where I was staying, or leaving to "go to town" for groceries or to check the internet once a week or so OR to use my cell phone since where I was staying had no service.

No faster then 3 miles an hour was my speed. Once I almost went off the side of the road into an arroyo and thought "Lordy, I would HATE to have to walk either way"! It was a test........each and every time.

I decided to focus on the beauty of the path. The different times of the day what would I see? Who would I see? Etc.

"The Cowboy" on his beautiful horse leading the cows from one pasture to the other on a daily basis was the most beautiful, funny and favorite event. I just hung back in the car, never crowded them and just enjoyed the journey. I felt like I was seeing a Biblical scene. When the cowboy would get to the next pasture, which took almost ten minutes, he would ride to the side of the road and indicate for me to go on.

The "cowboy" had the most beautiful face. I would wave and smile and say "gracias". He would smile with his very high cheekbones and slightly slanted eyes. Very Asian look. I so wanted to photograph his face but didn't want to offend him or make him feel uncomfortable so I took these photographs.

One day while heading back to the herd he had long, long grass hanging from each side of his saddle along with his shiny, metal milk cans that he used to milk the cows. At one point the grass slipped off. Without indicating that he knew I was behind him, he stopped, reloaded and then with a very gracious sweep of his hat, he turned and acknowledged my presence. A grand gesture, I thought. I estimate he was in his late 60's or 70's. What a beautiful sight.

My intention is to enlarge the photos, frame them in a three or four photo frame and mail them to my friend to give to him. I doubt sincerely that this man who lives in the ranchito has ever seen a photo of himself.

Besides my adventure of watching the cowboy, there were egrets, parrots, wildflowers and other assorted creatures. Oh yes, a coatamundi. Not as large as the one that came down my chimney here in San Miguel though.

Then one day as I came around the curve, the road was a pile of rocks. No way for me to move. I looked up and a man gave me the universal Mexican sign for "wait a minute" and I did, patiently wait. Lo and behold a bulldozer came around the cliff and cleared the road! Amazing. Boulders, trees, dirt - all was cleared in a very short time and I was on my way.

I came to realize that although that path was 2 KM., it was a transitional journey from paradise to civilization and back. As I drove it more and more, I didn't even notice the unevenness of the road or the rocks, I was too busy watching for the next surprise.

Truthfully, I can say, I have never driven a "path to paradise" in the USA. Especially one with a cowboy and a coatamundi! VIVA Mexico!