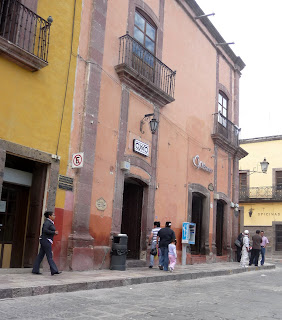 There is a very small minority of ex-pats in San Miguel who get hopping mad any time they feel that the Colonial character of "their" town is being assailed. They blither and blather on the SMA Civil List.....for days!

Most recently the rumor was passed by an employee of McDonald's, according to the poster, that McDonald's was opening on Canal Street which is close to the centro jardin. As the posts continued, it appeared from their ranting and raving that it would be in the middle of the jardin, for goodness sakes. Nothing came of it. It was a rumor.

Not content to hassle McDonald's, the unhappy folks threw in the fact that Starbuck's was on a prominent corner next to the jardin and OXXO (like a 7-Eleven) was also, heavens forbid somewhere down there "somewhere".

I saw the OXXO the other day and took this photo. It is two blocks from the jardin. The signage is so nondescript that it is no wonder that no one could specifically say where it was located. The signage on Starbuck's is in the same manner.

Were McDonald's to come into the centro, I presume their signage would be the same as this is now the new approved signage, as of two years ago.

Oh woe is me - would that this was the biggest problem in the world!

By the way, Starbuck's is always busy with Mexican Nationals. As is McDonald's out at the mall. So, bottom line, how the heck can "guests in Mexico" complain? Who knows - but they do!

The McDonald's in Antigua Guatemala is something to see. Antigua is a tourist city with cobblestone streets and rules against anything looking even a little 21st century. Their Mac's is a work of art, fountains, iron work on the walls, even a few tile mosaics. I was in town walking about for a few days before I noticed their sign. I think your correct that the good towns folk are excited about a non issue.

Oxxo, though it looks like a Gringo outfit, is a Mexican company.

The Starbucks that so many SMA Gringos got into such a uproar about fits right into the Colonial ambiance, and it's quite beautiful inside.

I think all those precious and arrogant Gringos and their snippy attitudes should be tossed back over the Rio Bravo and never be allowed to enter Mexico again.

I think that if Juan Aldama and Ignacio Allende were alive today I wouldn't be surprised to find out that one of them had a McDonald's franchise and the other a Burger King on opposite corners. They would also probably be active on the town council and lobby to have those damn cobblestone streets paved over so the Gringo tourists wouldn't break an ankle :)

I was amazed to see Oxxo take such a low profile. Here their signs are on towering posts so you can see them a mile away! Sometimes the chains can respond to local aesthetic requirements, if there are any. And I for one am glad when I finally get to visit your centro jardin I can stop at Starbucks!

Norm, I was in Antigua a few years ago and don't even remember seeing it! It obviously blended in. Antigua is certainly a beautiful and unique place.
Felipe, OXXO is so profitable that they bought 7-11 in the USA! a year or so ago.
Bob, great point! Funny thing about the cobblestones, when I go someplace where the sidewalks are smooth with no holes and the streets are smooth, it is the first thing I notice.
Bliss, when Mega came in with their usual orange branded MEGA sign there was such a hue and cry that it is now a cantera look and no orange in sight. I guess maybe, and I don't know this for sure, that the UN World Heritage committee might have some input on this........

Too much time on their hands....