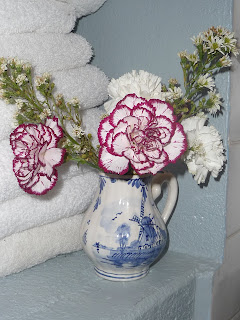 Flowers that have survived for a week since my birthday were rescued this morning and placed in a little vase that I had in the cabinet. I really didn't think too much about what I put them in or where I intended to put them. I selected this little vase more for the size of its opening then anything else.

Walking around the house, I decided to put it in the bathroom in the nicho where all the white, fluffy, towels are stored to add a little color. No more thought then that.

I was in the bathroom a little while ago and really noticed the "vignette" for the first time. The texture of the towels, the colors of the carnations. And the sweetness of the vase. I wanted to share it with you.

All the gentle, wonderful memories of my time in Delft twenty years ago came flooding back at the sight of that little vase. What a delightful day and time in my life. I had traveled to Europe for the first time, alone. I had decided to take a day trip on a bus to Delft, Rotterdam and The Hague. I had no idea what I would see, how far I was going, but I was ready. I do remember it was the first time in my life that I was on streets so narrow that the bus driver had to pull his mirrors in to be able to drive down the street! Now I do that all the time on narrow streets in Mexico!

Delft was charming. Rotterdam was shocking - all new construction - very avant garde. Why? Because the town had been bombed to smithereens during WWII. That was a first for me also, seeing first hand what the war had done to Europe. A lasting memory. A memory of the Hague? An Asian couple posing in front of the Hague dressed in their wedding finery for a wedding photo. Unique, I thought.

The other sweet part of the carnations in the Delft vase is that the flowers were given to me by Josefina, the maid, for my birthday. I was so touched that she remembered. I was touched that she took the time and her money to buy them for me. It means a lot to me.........I know she doesn't have the time or money. What a dear person she is to me.

A task to save a few flowers turned into a vignette of beauty but also of sweet, meaningful memories.
Posted by Babs at 2:13 PM

Very poetic theme Barb. You should try writing a poem about it or paint a watercolor to remind you of this again in years to come. Perhaps you could start a journal and this would be a nice start :)

Bob, I think of the blog as my journal. Paint, I keep thinking I should get back to that......don't have the patience for watercolor but some abstract thing would be possible.........Thanks for the ideas.

Happy belated Birthday Babs,
I love the vignette you came up with for the flowers.Thanks for sharing it with us. Your housekeeper sounds like a sweetheart. Jan in Mississippi

It is such a blessing to embrace our sisters wherever we find them. I'm sure both you and your "helper" are grateful for one another.

Hey Jan - Josefina has been with me 10 years. She IS so sweet. Her whole family is wonderful. Her cousin is nanny to the grandchildren and is equally wonderful. I know her whole family. I'm blessed. Thanks for the belated b/day wishes.
CC - Yes we DO need to embrace our sisters......