An Afternoon of Love and Affection 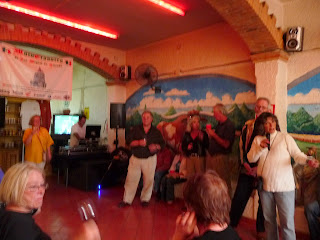 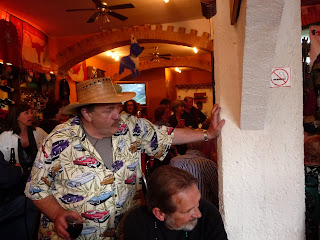 Keith moved here about five or six years ago from Houston. Never having been in the food business, he opened a little tent covered place in a parking lot and started serving the best darn brisket, ribs, chicken and sausage. I mean darn good - Texas good. He had about eight tables to start. He also served homemade potato salad, coleslaw and pinto beans. What else could you need? Oh, and brownies for those with a sweet tooth. He stuck it out. Built a reputation. Prepared briskets for those having parties. I tell you, it is not easy being in the food business in Mexico. It's hard enough in the USA where everything is delivered to your door, but here it is schlepping all over the place for purveyors, ingredients, you name it. I admire anyone who is that committed. He kept his prices low and has continued to do so.

Keith had always wanted to do this. He told me this on a trip to Texas when he rode back to Houston with me several years ago. I secretly thought that he had little chance of success since he had never done such a thing, but, I kept my mouth shut. Luckily, he has made it - big time.

He moved to a much larger location about a year ago. A brick and mortar building! He started out in half the building - and now has knocked out the walls and taken over the whole building. Good for him. All this in about three years. Amazing.

Yesterday was Keith's birthday. The big 6-0! Many in the ex-pat community turned out to celebrate and honor him on his day. I think he was overwhelmed. In fact, I KNOW he was overwhelmed. We had to almost drag him from the end of the bar to get him to circulate. As usual he was making sure that all the staff was serving everyone the free wine, beer and margaritas that they could possibly drink. And, that all the free food would come out perfectly on time to feed all that had joined him for this awesome day.

It started at 3PM and, I hear, went on til after 10PM with music and dancing. The hat was passed. Not to reimburse Keith, but to provide more funds for Creciemento which is a program for special needs kids. It's dear to Keith's big heart. In fact, several years ago Keith had a little BBQ cookoff in the adjacent parking lot to his locale. It was so successful that it is now held at a huge facility and is sanctioned as a Cookoff location by the powers that be in the USA. It's now held every year and all funds go to Creciemento.

Don't ever believe that one man can't make a difference - a huge difference. And this man is having so much fun doing it. There are few who don't know him. There is no one who has a bad word to say. And, he certainly will have the memories of yesterday filled with love and admiration to remember for the rest of his life.

Aw, Keith, what a cool guy.
Imagine making a go of the restaurant business in MX, that is a challenge. I have a friend here at the lake that has 'made it' poco a poco too, but he is the hardest working guy I've ever known and he never stops working on his restaurant in some way. I admire guys like him and Keith. Go Keith!

Please tell Keith that Diane, Roger, Jacob and Lily said Happy Birthday. And that we will see him when we come to visit in 3 weeks.
Thanks!
Diane

What is the name of his restaurant? Where is it?
I'll check it out next trip down.

Rick - The restaurant is "Longhorn". It is on the Salida de Celaya. Leaving town it is on the left just before the Pemex station. Coming from the glorieta it is on the right just after you pass the Pemex station. It's casual and fun. On Thursday nights for 99 pesos you get a filet mignon, baked potato and delicious salad with french bread. A deal you can't beat. Enjoy.
Diane - I've forwarded your comment to Keith.......I know he'll be happy to see ya'll.
Mx Trailrunner - almost all restauranteurs are the hardest working people - small profit margin, lots of work.