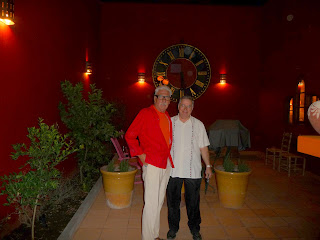 I met Joe at a party at Billie and Ned's house many years ago. . Billie writes BillieBlog. He had on round yellow glasses. I thought then, "Anyone who can wear those glasses is someone I want to know!" He was stilll living in Paris at the time but ultimately moved to San Miguel and lived at the end of my street. What a character! What great parties! What fun clothes he always wore. And what a kind heart.

Two stories - because isn't that the essence of the people we care about - the experiences and stories? One day there was a knock at the gate and I opened it to see Joe standing there with a sack of tomatoes for me. He grew them on his roof, in close proximity to wear he suntanned on a daily basis. How generous! Then remember back in August when my wallet was stolen? Well I went to a bank to open an account and hopefully be able to get some cash from this new bank. Joe was there. He and I visited and I told him what had happened. He said, "How much do you want?" Not, "How much do you need?" I said no, no, and I did work it out with the bank. He called that night to make sure I had indeed been able to get money. Now THAT is a friend! 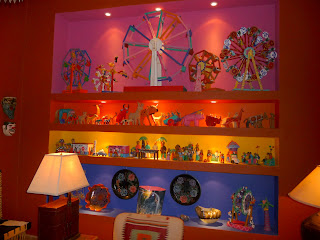 Joe's love of folkart even surpassed mine. I loved to be in his home and admire and talk about the various pieces in his collections. So few people had that knowledge about Mexican folkart. I treasured that too. His house near mine did not showcase his collections in any way near what his new house accomplished. There was a super party there last Friday night with all of his friends and his brother who had come from Montana. Joe had built the most wonderful warm home. Something to enjoy and be proud of. His creation. 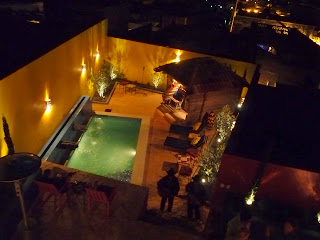 Each minute detail was selected by Joe. It WAS Joe - a house of color - just like him. And of course he HAD to have a pool for his suntanning. Not just a simple pool but one with a little pool house next to it. Again, attention to detail. 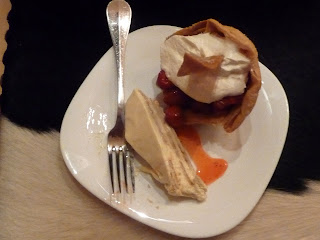 As if all that wasn't enough, Joe LOVED to cook. His dinner party last week of fifty or so people was entirely prepared by Joe and his brother. All to complete perfection. I teased him and said I guessed I couldn't serve simple brownies anymore. The above dessert was a lemon cream cake with fresh strawberries in a pastry bowl with a dollop of whip cream on top. A joy to behold and almost too good to be true.

Just like Joe! Gosh we'll all miss him so much. He was "one of a kind".

He leaves a big hole in San Miguel.

It's almost as if he had the party to say goodbye to us. What a joy he was.
Wendy and Jim

Billie - Joe will be there with us on Friday - Remember how he commented last Friday night that the house could hold 200? Who would ever have thought.....that a week later.
Wendy and Jim - Happy to know you read the blog. Also happy you got the info on Joe. I thought of ya'll not an hour ago and thought I needed to call Angie to get your number. I'll c u Friday @ Joe's @ the Memorial @ his house.

How did he die?

How did you find out?

Did he die or move?

You are all lucky to have had a friend like Joe. Very nice tribute.

Lisa said...
This comment has been removed by the author.
2:56 PM

Babs,
I've written to Billie and wanted to say to you how much I appreciate your beautiful words about one of the most important peopple in my life. He was my Uncle Joe and throughout my 41 years, he has been a constant source of love, humor and truth for me. I am not sure he understood how much he was loved or how big a void his family would feel, but as I said to Billie, his presence made us all want to be better human beings and I for one will continue to cherish his memory and carry on his legacy the best way I know how, to be a better sister, daughter, mother, aunt and show my beautiful Uncle that he mattered more than he ever imagined to those of us lucky enough to have called him family. Thank you again, I do know how much you all meant to him and am grateful he was able to find ultimate peace in death in the place he found peace in life.
Much love,
Lisa

Dear Lisa, Thank you for taking time to write. I'm so happy that Joe's family could read Billie and my blog about such a great guy.
Yesteday was "so" Joe. Sunny, with laughter, and color - always color.

Since I too was a designer and collector we both loved color. He thrived in it, as I.

He surely will be missed and believe me, he knows it. He hasn't left us, only his body, but his spirit is lurking and I can assure you thoroughly enjoyed yesterday's "party" or memorial.

Dear Babs,
Thank you for sharing your wonderful thoughts and stories about my dear cousin Joe. I will miss him...I'm so glad his brother Wayne had some time sharing in his new home and the joy of the community and love he found in San Miguel. We had a wonderful phone conversation this summer...but I so long to see him again...that will not be...but he will always be held in a very special place in my heart. Tami (Kinnison) Davis WY

Dear Tami - Uncles are ALWAYS special and you were so lucky to have Joe as YOUR uncle. He was childlike in his joy of life. I feel privileged to have known him and called him "my friend".

Hopefully all your family members will read my tribute and Billie's beautiful remembrances of Joe.

Do stay in touch.