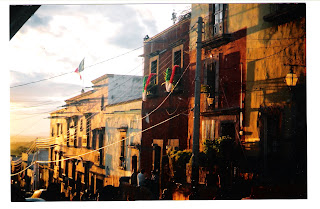 Why do people feel that those who live in San Miguel don't understand Mexicans? That they are not assimilated into the Mexican culture. That they are not contributing to the well being of the Mexicans, if there Spanish isn't fluent? Isn't that very pedestrian and snobbish?
Who's to judge?

I don't take it personally. I consider the source of the criticism sometimes and say, "Oh well, that's just how that person is - they are judging me or us based on their own attitudes." But it just doesn't seem to let up. Get over it people.

San Miguel is an anomaly in Mexico. I've been doing business in Mexico since 1974, but had traveled here for the first time in 1968. I purposely chose San Miguel for many reasons - but the fact that ex-pats were here was not one of them. Some of them are: The singular beauty is breathtaking. The architecture is awe inspiring. The location is central and one can "spoke out" easily to all over Mexico. It is easy to drive back to the states to see family and friends. Culturally there is much to do here. Volunteering-wise there are many ways to make a difference either individually in a Mexican life - or collectively. That's just a few of the reasons. Who gives a crap if someone is fluent in Spanish or not? I personally would say that many of us have made way more of a difference in lives - irregardless of whether we're fluent or not. It's just sour grapes, in my opinion. A need to feel superior.

So, I'll get off my soapbox now. I hope, if you see yourself in these comments, that you'll zip your lip. My Mom always said, "If you can't say something nice about someone, don't say anything at all". It works.

Ok, I'll bite, wanna tell me about it. I must be reading blogs that are too nice.....

I think the people who bash SMA are the same ones who think that the "real" Mexico always requires a donkey and a cart. And no white skin or languages spoken other than Spanish.

Mexico is huge and varied and wonderful, and all of it is "real."

Good evening Babs,
Your blog is a highlight for me today. Your last sentence is an endless memory to me from my Mother.
Freyah

P.S. Sorry about the double post - my internet is screwed up tonight -

Babs - Don't let it bother you. They're just jealous. You live in a magnificent place and you've portrayed it with loving eloquence — Someday I hope to visit you there and you can show me YOUR SMA.

Babs, I cannot make heads or tails out of those critical folks either. It´s best just to ignore them! I think San Miguel is one of the most desirable places in Mexico for Gringos to settle.

I am new to your blog, where is San Miguel? I am moving to a ranch in Veracruz, Mexico in February or March. I don't understand though.. are people saying that there are not enough americans where you live or too many?? Sorry I am new and have not been following. I am engaged to a man from veracruz and I do speak Spanish fluently, but even if I didn't I would be mving to the ranch. Sorry, I must be a little lost.

Don't listen to those negative comments. They are probably unhappy people who can't stand others being happy.

I would love to visit SMA because I recently learned that one of its Sister Cities is my hometown of Redlands, CA.

To all of you who took time to comment - thanks. I agree that anyone who makes the choice to live in Mexico, hopefully loves the country and the people. I also agree that there is no need to be negative. We all know its not perfect, but heck where we came from wasn't either. So to continue to undermine wherever anyone lives is just counterproductive....in my humble opinion. Glad ya'll agree. We're all in this together. We're all expats.........after all.

Leslie - I went to U of Redlands for two years - it's kind of a homogenized community as well - great sense of belonging - as well as the best fresh strawberry pie at Sage's - long time ago!

Oh, I hear you Babs. It is incredible how some can refuse to see Mexico when it is right in front of them.

I'm used to people saying that places like Cancun are not Mexico, they are an outpost of the US or some such. That's ridiculous and it is insulting. Cancun, SMA, Ajijic, PV, they are all Mexican to the core. They are how Mexico does that kind of place. In the case of Cancun and PV, it is how Mexico does a big beach tourist town, it is not how outsiders do it.

In SMA I saw gringos certainly but I also saw a lot more Mexicans and heard a lot more Spanish than English. It's a beautiful, historical, treasure of a town and it is exactly the way the Mexicans who live and vote there want it to be.

The expats in SMA are just smart enough to have moved there and enjoy the beauty. It is too high in altitude and too cold for me to live there but I love to visit.

Look at it this way: Those silly curmudgeons who have fun picking on San Miguel are like those rude kids in grade school who so enjoyed pointing out your big nose, bandy legs, or birthmarks.

You (I´m speaking rhetorically here) would cry and throw erasers at him when he did that. You would be soooo upset!

But what did your mama tell you? That´s right. Ignore him, and he will quit doing it. You finally tried that, and it worked. It wasn´t fun anymore for the bully boy. He shut his tater trap.

So that´s my advice to you. Don´t throw erasers. Just ignore, and the comments about your big nose, bandy legs and birthmarks will stop. Bet on it.

I recommend you remember your mama´s sage advice.

My guess is most of the nay say ers towards SMA are jealous because they think they can't afford to live there.

And of course if you really want to live there - it is possible to find an affordable situation.

My friend Bob Johnson, an artist and film maker, is heading back there after 6 years or so here in our area.

We will miss Bob - our loss and your gain. I hope you have a chance to meet him.

I was very surprised when I traveled in the area of Ajijic, where I met a lot of American ex-pats, how much time they spent criticizing other American and Canadian ex-pats. I guess it's like tourists not liking to see other tourists--it's not what they came for. Still, they were living in Ajijic and not, say, Aguas Calientes. Go figure.

Envy and jealousy. Same reasons why everyone living in Arizona criticizes Scottsdale and Sedona.

My sweetie and I would like to move someplace in Mexico where there aren't too many other ex-pats so that we are forced to get out there and socialize with Mexicans rather than "sticking with our own kind," which would be an easy habit to fall into if there were enough ex-pats around. Not that there's anything wrong with it either, it's just not what we're looking for.

But reading your blog has made me more curious to visit SMA. We went to Guanajuato a couple of years ago and wanted to check out SMA but didn't have time.

Can you imagine someone saying "why live in Paris, there are so many Americans"

San Miguel is one of the best places anywhere. Even old curmudgeons like Mr Zapata would thrive there. He would have so much more to write about and complain about.

All of us ex-pats have made careful, well thought out decisions of where we want to live in Mexico. The nay-sayers probably have not and that is why they are such sad people.

Well, I've obviously missed something that has pushed your buttons but glad I missed it. Too weird to have criticism of SM, one of the most magical places on the planet. I can't imagine...would love to be there right now and so happy that you made that choice. Are these the same folk who think that all immigrants to our country need to speak English?

I have loved SMDA every since I first visited in 1975. It is the only place La Dulce and I considered moving to other than Merida. If comparable housing wasn't twice as expensive and a beach were nearer, we would be your neighbor now and everybody could be picking on us, too.

There is a parallel between criticisms of SMA and the USA. It stems from the same self righteous place and usually from a complete lack of experience of the place being criticized.

The bigger the target then the more arrows or bullets there are that will hit it.

But to be honest, I have heard people in SMA says some not so flattering things about Ajijic. I guess deep down, you feel better about decisions you make if you can criticize the decisions others have made.

But pray tell what got you so riled up in the first place?

Woo hoo, I DID stir the pot, didn't I? It was a culmination of an individual making snide remarks on another persons blog and it just sent my red hair flaming......A burr only gets under my saddle, as we say in Texas once or twice a year.They were rude and unnecessary comments.
Glad to get so many comments......