A "star" continues to shine 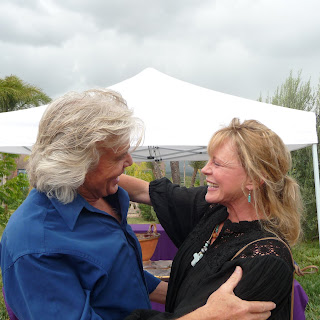 John Davidson would be mortified to know that I referred to him as a "star". He is one of the least pretentious people I've ever met.

When he and his wife Rhonda came to look at my guest casita to rent, they could not have been nicer. And in the 1 1/2 years that they lived there, while they built their home in San Miguel, they were ALWAYS gracious and kind.

The photo above shows how open and friendly John is to everyone. He's conversing with Deb about her late husband Hoyt Axton before his performance out at Patsy's Place this past Sunday. At some point, in his long career, John recorded with Hoyt. He said it was "very interesting".

She, I and my friends Ron and Fred went out to hear John sing and to have a delicious lunch. One of his comments, "Engelbert Humperdink is in Las Vegas and I'm on the outskirts of San Miguel" brought laughter. Of course John performs EVERYWHERE all year long. They are always on a plane going somewhere. We're all glad when he can get a little rest and be back "home". 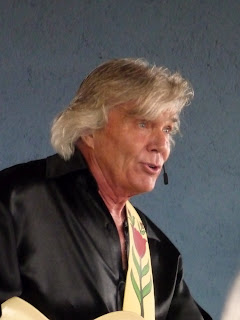 What a show he performed. Two hours of all kinds of music. Since he does a lot of Broadway and Community theater performances, his voice really has resonance. It was so enjoyable. It was a bit surreal for me to see "the performer" as I typically saw him in his bathrobe singing in the garden. Or in jeans and a shirt. His jokes and one liners kept everyone laughing. 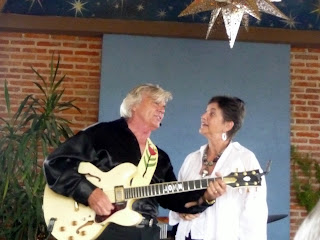 Here he has pulled my friend Fay out of the audience and is serenading her. She's enjoying, obviously, every minute of it.

One of the funniest things he said, which I'll never forget was, "They told me the upper crust from San Miguel would be here today. So I looked up "crust" in the dictionary and it said, a lot of little crumbs held together by dough". OMG, did I laugh..........as did others. 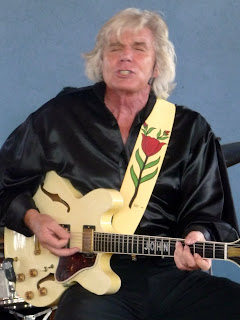 A great afternoon enjoyed by all. There were probably at least 100 people there and the small venue just added to the enjoyment.

So, if he ever does this again, and you haven't been, get out to Patsy's Place for a musical and culinary afternoon.

Hey, I remember him. He used to be on the tube.

John Davidson rocks! I liked him when he was on Hollywood Squares, but I absolutely loved watching him in "The Music Man".

Yes Felipe, on Hollywood Squares and at one time had his own variety hour. Leslie, I haven't seen him in a musical, but I'm sure he would be FAB. His voice is still beautiful.

Finally catching up on reading your blog. Geesch, moving to Mexico is a lot of work!!! Don't know how on earth we will be ready by March.

I love John Davidson! Watched his show and many years ago I saw him in the Dallas Summer Musical's production of Camelot where he was in the leading role.

Next time you see him, please tell him that I just loved his performance and felt that he was ten times better than any Robert Goulet. It was a real, believable performance and his voice was fabulous. That incredible resonance - you are so, so right. Plus, I thought he was awfully cute! I see he still has that warm, wonderful smile.

Thanks Babs. You brought back a delightful memory.

What a fun afternoon you had...never a dull moment in SM. Comforting to see that he, too, has aged...an oldie but goodie still.