This blog started out about 3 hours ago when I attempted to upload these photos. Then I had a hassle with Blogger in the uploading process, so NOW I know I have patience......... The first photo of Acampixle was taken in mid-June. Lest you think this is an unused street, let me reassure you that it is a major thoroughfare. And it's the way to get to my house. The circuitous path one must now take to get DOWN the hill of Cuesta de San Jose, or UP the hill is very confusing. Even for the taxi drivers. 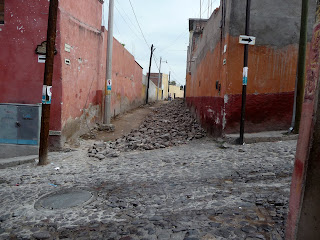 Now, when I tell them to go up Cuesta de San Jose, they want to know if Acampixle is open. The photo below was taken last week. They are meticulously positioning every single rock and paver. At this rate they'll be through sometime in 2010. 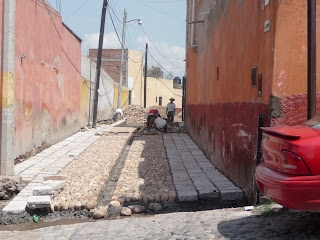 I did realize in the newest photo that they have repaired the dings in the corners, sort of, and the walls to the left. It will be interesting to see if the walls are painted now that they have been repaired. They also removed all the old political signs that were wrapped around the various poles.
I just realized if we all have patience waiting for them to finish the street which winds waaaaaay past those men and down the hill, just think about the men that are laying each and every stone. Three men and a path that stretches another four or five blocks past them. I'll let you know when they finish it..........if I live that long.....ha.
I PRAY they never decide to do my street. I would rather have the dirt, I think. I sure don't have much traffic because of the pot holes and such. There is a method to my madness.

That´s what they recently finished doing to the street behind my house, just two blocks worth.

Why they don´t just throw asphalt out there like the Good Lord intended is beyond me.

But those lovely streets are so charming at the end of the day - we have many in Xico and yes they do the same laborious assembly periodically. Small price to pay for the charm I think - unlike my amigo Felipe's desire for asphalt.

With this kind of "paving" in SMA where there is a rainy season and heavy traffic, including heavy trucks, and steep inclines, it doesn't last. They regularly repave the same parts of our street. I just wonder what the cost is on car repairs because of the cobblestones and potholes.

The Capt says this pace is how full employment is assured in Mexico. The idea is not to finish a job, but to have a job.

Cars are death.
Inconvenience the car.
Save the town.

Oh no, NO asphalt - well maybe on the highway would be nice!
I regret complaining about this - I now realize this is probably how they were doing the calles 300 years ago or more! They are things of beauty when completed.
I so agree with you Calypso and Billie.
"handmade" is a tradition in Mexico that I cherish, most of the time, First Mate.
And Dana, I agree about the car - except when I have to get back up my hill, eeer, mountain. A taxi is a blessing.