Much Ado About Everything! Weather, Shopping Malls and Covid

Things have been "rocking" right along for the last couple of months!

Between the weather with cooler temperatures and LOTS of rain, that has been a topic of discussion!

Questions like, "Now how much rain have we had?

This was the Obraje Presa (reservoir) after the first heavy rain in mid-May!  Since then we have had over fifteen inches of rain.  Which for us, is a lot, since about ten more inches would be our average rainfall for the year.  Unfortunately I can't tell you the total year to date but suffice to say it has been plenty.  Thankfully.

Just as we were all about to get back "into life" with vaccinations and still wearing masks, the next wave of covid has begun in San Miguel during the last few weeks.  The Delta variant is much stronger and since people under thirty have not been completely vaccinated as yet, everyone I know is being very careful.  Below is a photo taken in Chamula, Chiapas of women getting the vaccination.  Those wooly skirts are their traditional dress. 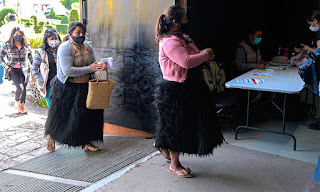 In fact yesterday some friends from Houston were in town and we ventured out to lunch on a patio near where I live.  Everyone on the patio was masked until their food arrived.  Upon entry to the property, one's temperature is checked, hand sanitizer is squirted into your hand and last but not least, one must walk across a sanitized mat to proceed.  Unfortunately the number of cases are rapidly rising not only in Mexico but in San Miguel as well.

My friends primary observation was that so many people everywhere in San Miguel and in Guanajuato City are all wearing masks.  They said that is not the case in Houston sadly.

The last bit of news that I want to share with you is the new Azula Mall coming to San Miguel in the next year.  It is very large with a Walmart, Coppel, restaurants all kinds of stores and a hotel, Ibis!  The hotel is one that was not on my list in the last blog post.  In addition there will be a movie theater.  So many things for so many people!

Below are all the photos provided by the development company from Queretaro.  It will be on the libramento on the outskirts of town, nowhere near Centro. 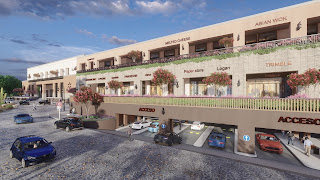 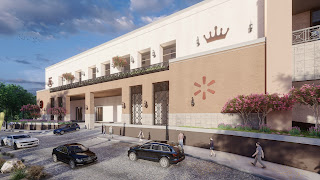 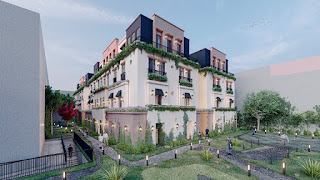 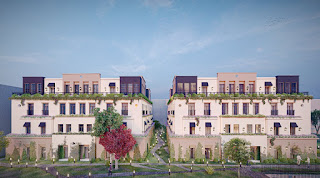 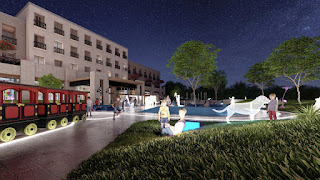 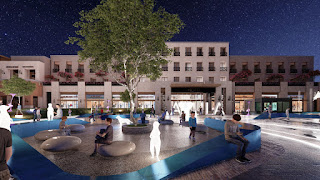 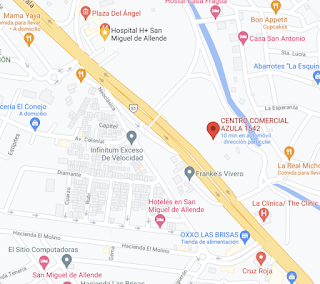 The last photo gives you the exact location of the mall.  In addition, a City Market high-end grocery store is opening in the next few weeks.  It is owned by the same company that owns La Comer.  In fact, they are only a few blocks from each other.  City Market is similar to Central Market in the USA.  It remains to be seen if this is a smart move or not.  Restaurant chains have been doing this for eons.  Putting many of their concepts in close proximity after they had completed their research and development.  It has always been successful for the restaurant chains.........we'll see about grocery chains!

A few miles away from this center, heading toward Delores Hidalgo, a new center will be across from the Ventana Golf Club and development.  It is reported there will be either 65 or 85 stores!  I can't remember for sure.  Anything over twenty staggers my imagination!

It appears that the sleepy little village that I moved to many, many years ago has definitely been discovered by developers and builders.

As I write this while sitting at Alejandro's house in CDMX we have just had a very heavy thunderstorm.
In regards to masks, I have noticed a big difference between here and back home in Ohio. Here, even outside, the majority of the people are wearing masks. Of course there are still those who go without or who wear their mask below the nose (that's about as useful as a screen window on a submarine!) In Ohio I was one of only a handful of people with a mask inside the supermarket. I hope that more folks back home are taking this new wave seriously by now.

Probably not Bill. Hard to believe.........and tragic! How many children will have to die before something is done to mandate masks and to not open schools?
It's like we are watching a horror movie in real life!

Stay safe, please and uee LOTS of hand sanitizer every time you are out and about!

I'm so glad when you and your friends ventured out you saw so many wearing masks. Unfortunately when I had to leave for an appointment at 5:00 Wednesday evening I was counting people with/without (not simply pulled down) and all the way from my house to Centro and back the count averaged for every 4 wearing a mask there were 9 that didn't have one on at all. I was stunned. I just can't comprehend that kind of thinking.

As many long days as I've spent at home these last 18 months even now when I'm out, as good as it feels in one sense to be out, I'm eager to get back home where I know it's safe. I know you understand that.

As to the mall near Ventana - while that's close enough to walk to from my house I doubt I ever do because of how the traffic will increase near it. Oy vey - the line, "...build it and they will come..." is all too true.

Barbara - Yes, I understand! I feel safest at home! Luckily, I feel truly that I have everything I need here other then friends and seeing the town! But, it is what it is.
I just wrote your name down to contact you today about getting together!

I have such mixed feelings about all the development. For me, I don't need anything and if I do, I order online. But, these developments will hopefully bring jobs and income for many. So, if it helps the Mexican families, I am good with it.

But the cost in traffic, pollution, etc is a sad reality. When I moved here there definitely weren't nearly as many cars and absolutely not as many tourists on the weekends. Yes, Sadly, SMA has changed but it still is gloriously better then any other place I can think of........

Dear Barbara: We have a small weather station on the roof, and so far it has recorded 17 inches of rain this year, and we still have September and the remainder of August. Whatever you do, don't complain about "too much" rain; there's no such thing in San Miguel.

I know where the new shopping center is going, but I can't quite picture it. There's like 50 ft. drop from the Libramiento the bottom of that lot, but I'm sure they'll figure something out. One curious factoid, if true: Someone said there's also going to be Ferris wheel somewhere there. That may be too much.

I haven't spent too much time worrying about it, but I wonder how they are going to handle all the traffic. Down the block from the Mega glorieta, we're going to have City Market and that is going to be a major bottleneck.

Many of the beautiful big malls up NOB have been closing over the last few years. This started way before the pandemic. Not sure why but maybe too many stores already in an area or too much traffic to make browsing fun anymore. I am sure Amazon and other home delivery has made the biggest difference. As far as the SMA proposed developments - anything that takes traffic away from Centro is good!

Hi Al - If you drive around the libramento toward Delores, after you pass the LaComer area on your right you will see metal fencing up where the construction began about two weeks ago! And, yes, I read the description on the developer's website and it did say a ferris wheel. Hopefully that will not happen! It would be like Coney Island in SMA!
It remains to be seen with all the work on the roads, if City Market will or will not cause problems since you enter it on Salida de Celaya and not from the libramento.
When I drive, I always take backroads to avoid those situations and now there are several, thankfully.

Rick, Centro continues to be the area that the tourists want to be in when visiting. Of course, that makes sense. On the weekends there is limited vehicle access and so the outlying parking lots are used.

In looking at the architecture of this new center, it is interesting that the parking and elevators will make it much more accessible then the malls in the USA where it is usually huge parking lots that require walking a distance.

It is August and I should be nestling my posterior into a velvet seat in the Teatro Angela Peralta to enjoy an evening of chamber music. Instead, I am sitting in a plastic chair in my house writing to you. I may even prefer the latter.

As you know, I am an inveterate optimist. But I am beginning to wonder if we may have seen the end of live performances in a large building in a central part of town with a lot of people who all have paid a good deal of money to get in. Maybe it will be another part of life relegated to nostalgia -- like a sleepy San Miguel.

By the way, the idea of a ferris wheel in San Miguel merely sounds redundant. ;- {}

Indeed to all of the above!

Dr. Lina said...
This comment has been removed by a blog administrator.
11:06 AM