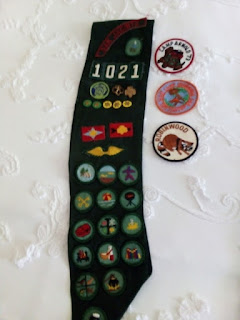 I have already ordered Girl Scout cookies for this year from a delightful granddaughter of a friend.

I had done this long before I found my daughter Jennifer's sash from back in the 70's yesterday.  It was just a serendipitous experience.  I went in the container that holds all her treasures to fine her tiara from being Homecoming Queen.  I wanted to give it to Matilda for her 13th birthday which is coming up soon but, alas, it was not in there.

Imagine my surprise when this was in the container!  I had been thinking about Girl Scouts for about a week since I had ordered the cookies! I had thought about how I hoped Hanna would sell enough to be able to go to camp.  In the box with the sash were the letters sent home from GS camp from Jennifer!I laughed at the letters and the questions on how to do laundry.  Aah, those were the days.

Being a leader and the mother of two Brownies who became Scouts was such a delight for me as I had never camped in my whole life until that experience.  Imagine camping with about twenty young girls!

A friend convinced me to be Girl Scout Cookie Chairman back at the end of the 1960's.  I had no idea what I had signed up for until the 18 wheeler pulled up in front of our small apartment at the time and began to unload hundreds of boxes, which ended up filling our small dining room from one end to the other and to the ceiling.  I still can't get over the visual image.

That was the beginning!  But it never really ended because my youngest daughter Julie was a leader for her daughters, all three of them, when they were growing up.  She was an incredible leader for more years then I.

It is such a great program for girls.......and boys, I guess now.  The skills they learn and the fun they have not to mention the friends they make is a life long memory to cherish.

I giggle remembering some of the experiences!  And I'm amazed at some of the others.  About ten years ago I was in Houston at the Galleria and this gorgeous, dignified woman came quickly up to me!  I had no idea who she was but she enveloped me in her arms and said, "Mrs. Eckrote, I'm Nedra Simpson"

Oh my, the Olympic runner who when she was in the fifth grade outran the entire football team who was at the same dude ranch as the troop was in Bandera, Texas!  What a wonderful reunion.  Today Nedra would be 59 years old!  Wow.

I could go on and on.  But, I digress.  Here's the information for you to order Girl Scout cookies to help Hanna to sell enough to be able to go to camp this summer or whenever it is possible for free!

https://digitalcookie.girlscouts.org/hanna855955 I don't know why this is not printing out as blue but hopefully this will work.

It is the easiest ordering form that I have ever used.  I know it would be more fun to have Hanna coming to your  door with her uniform on and wearing her sash proudly.  But, in this time of covid that is not possible, so, go for it.  Get those Thin Mints or any of the others that you love.  Buy  lots because you can freeze them!

Thank you Barbara!!! Hanna thanks you also!!!

Here is the link to Hanna’s page https://digitalcookie.girlscouts.org/scout/hanna855955?fbclid=IwAR2eDCmLWCt2k9X9H9MoW8o9NfgPN0DECdddCefCTSvKM7CesUcoR0nUrV4

Hi Kelly - the address I posted was how I got to the order form for cookies and placed my order with no problems..........hopefully it hasn't changed.

Thirty-eight people have read the blog which is a low number but hopefully it will pick up as the week goes on......

Thanks for the info!

Victoria - It was my pleasure to write the blog and hope Hanna has a great cookie slae.

srgomez said...
This comment has been removed by a blog administrator.
8:06 AM