A Time Without Touch

This is a photo of my sister, Marilyn and my brother-in-law Don Truckenbrod.  I don't know when this photo was taken but it is a good likeness of them.  My sister and brother-in-law passed on
in June and July.  Marilyn, who was eleven years older then I, died on June 20th and then Don
passed on July 21st.  Two shocking events for me as I did not realize that both were in such ill health.
No, it was not Covid.  But, because of Covid, they were not together when Marilyn passed. And then I guess after 68 years of an absolutely great marriage of love, family and fun, Don  passed as well. 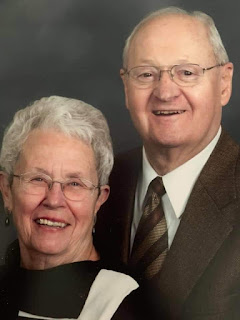 My sister was like a second mother to me, much to her consternation!.  But, she WAS always there for me from the beginning, for sure.  In fact, often when she was going out on a date, I got to tag along.  She was Class Beauty and our house was always, always full of her friends.  My brother, Bob, who passed in 2003 was only one year younger then her and so you can imagine, our house was the "meet up" place during my childhood.

I remember vividly going to stay with them as a child when they were first married and both going to Northern Illinois State Teacher's College which is now Northern Illinois University in DeKalb, Illinois.
Even after our immediate family moved South and I had a little brother, we still headed to Marilyn and Don's in the summer to spend time with them.  Then after my little brother Bill came along and we lived in Shreveport, our Dad would take us to Kilgore, Tx to catch the train to Chicago where someone would pick us up and take us to wherever they were living at the time. Rockford, Polo, McHenry, Illinois.  I think I'm missing a few other towns, but no matter.  By this time they had started having their family.
Gayle, Gary and Carol were the first three.  A couple of times Bill and I spent the summer in Polo Illinois and had  those three to play with and take care of.  Wild and fun times!

Don taught me how to drive!  I want to say it was a 1942 Ford with a smitty muffler that could be heard from one side of town to the other.  But I might be wrong about the year.  IF Marilyn and Don were still here, they could tell me specifically some of these facts.  Marilyn was the keeper of all of our huge extended family's details.

Eventually they moved to McHenry, Illinois where Don taught school as did Marilyn and then Don would take the train into Chicago and go to Law School at night!  It was a long drawn out task for him.
By this time, they had two more children. Karen and Scott, and so not only were they both teaching but they also had a family with five children.  I loved going to visit them.  Something was ALWAYS going on.

If you walked through McHenry with Mar, she knew everyone because she taught kindergarten for twenty years.  Don became a Family Law attorney and helped many, many families in that area. Eventually he was also a Judge.They were known and much loved, to put it mildly.

Don had a great sense of humor and loved to kid around.  One summer when they lived in Polo, there was a bicycle and wagon parade for the Fourth of July.  The kids all had big signs on Ms. this and Mr. that and then on one of the kids, Don put a sign Ms Take.  Then there was the time that we went to the hills around Woodstock.  The year was 1978 and I was recently widowed and had three children

It was Christmas time and we arrived to snow with me in open toed sandals from Houston.  Once I acquired appropriate clothing from various family members off we went to a hillside for the "kids" to toboggan down the hill.  Wow, it was fun to watch.  But then Don had something that looked like a garbage can lid and he swore if I just sat down, it would go smoothly down the hill and I would not be in any danger.  Ha!  Just as I got ready to go down, he gave that thing a little twist and I looked , I'm sure, like a spinning top heading to doom.  That was my brother-in-law Don!

Seeing each other since I moved to Mexico had been non-existent except when Marilyn came once.
I kept thinking I would get up there to see them, but, alas, we had not seen each other since 2002 when my brother, Bob, turned 70.
Of course we stayed in touch by phone, internet, etc.  Wish I had somehow gotten back up there again to McHenry to see them after they moved into a Retirement facility.
Yes, the memories keep flooding and I have boxes of photographs that I hope some day I can share with their children.  Lots of photos of them as little tykes that are so precious.

To me, one of the saddest things about this time of their passing is that no one could be with them because of COVID, even though neither had it.  And, there could be no funeral or church service.
I'm sure their kids will plan something when it is possible to have a Memorial and gathering .

I will do everything I can to be there to share all the memories with them. By then, hopefully, it will be a time when we can hug and touch and laugh and love them with all our hearts and stories!

They are gone but will NEVER be forgotten!

Oh Barbara. What lovely memories you've shared - and I know there are myriad memories yet to be conjured. I'm so sorry for your loss. Yes, it's a terrible time - to not be able to fully grieve and honor and gather. Thank you for sharing what you have - while reading your post I found myself smiling with tears in my eyes. I, too, hope one day you can be with family to fully share and honor these two. Bless you all.

I'm very sorry for your loss. It's hard to see loved ones depart. But you are a classy lady. You know how to honor your sister and brother in law with honor and even with humor. You are a role model for me and, I'm sure, for many others. My deepest sympathy. Carlos.

My condolences, Barbara. It is sad that they were alone at the end because of the pandemic, but it sounds like they had a long, loving, wonderful life together. Que descansen en paz.

Thanks Barbara for commenting. I carried the loss around for quite a while before I could write about it. I feel better today after sharing my thoughts and feelings with friends like you!
It has been a rough five months!

Carlos, how lovely to see a post from you! I so appreciate your thoughts and your time to write. Bless you.

Hi Bill. Indeed it was sad they were not together at the end of Marilyn's life but their children were all around, outside the place where they were staying. That was the saddest part is that family can't be with family at this time!

But, I comfort myself with the thought that they are both at peace now and if there is an afterlife, they are reunited again.

I'm very sorry for your loss. My mom just passed away and I couldn't be there to say goodbye, so I understand how hard that is.

I'm so sorry for you and the family.

Oh Cynthia, I'm so so sorry to hear of your Mom's passing and that you couldn't be with her. I can't imagine how sad that was and is for you.

There are so many people in the World experiencing this sadness. Hard to believe.

Thanks Nancy! I appreciate your taking time to write.
Hope to get over to see you one of these days. Well, probably in 2021
with the way things look now!

So very sorry for your loss. What a wonderful tribute you have shared with us. So very sad that they had to be alone at the end. My message from this is to live each day to the fullest and to keep telling those in your life how special they are and how loved they are.

Thank you Contessa. My sister and brother-in-law worked hard, raised an amazing family and ALWAYS had fun together! Don's sense of humor kept my sister laughing for 68 years and he adopted such a great attitude about everything......until she was gone. It took all the stuffing out of him. I loved being with them just to be part of their loving marriage. Both knew they were greatly loved!

Condolences on your losses, but certainly you’re memories are a wonderful Blessing

Thanks Michelle! Indeed there are blessings........and good memories.

Loi pinel said...
This comment has been removed by a blog administrator.
4:19 AM