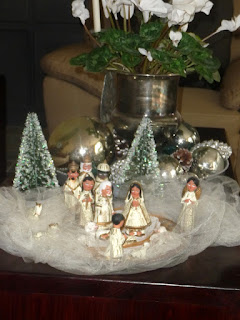 Yesterday was the day to start getting the decorations out to put up around my little house.  In the past, it was a weeklong escapade.  Now it will take this afternoon for a couple of hours.  Life changes.

We always started putting our decorations up at this time of December in the past.  Right around the
Feast of the Immaculate Conception.  Having been raised Catholic, now a former Catholic, I never
forget this date.

You see, not only was it a Holy Day in the Catholic church and a day off from school, but it was my
Mother's birthday.  She was a "converted" Catholic.  This happened after she married my Dad.  "Converted" Catholics are very strict about following the teachings of the church.  Hence, we said the Rosary every night, on our knees,  to pray for people we knew but mostly for those we didn't.  I often thought as a child that surely some day this would not be needed anymore.  Oh, the innocence of youth.

Growing up in Chicago until I was 10, we would always, on this school holiday, go on the L train into downtown Chicago to see the Christmas decorations at Marshall Fields.  When I say "we", I mean me, my cousins Carol, Jack, Jimmy, Sandy and Bonnie, who wasn't a cousin.  We would go to Marshall Fields and ride the escalator up all the floors to see all the beautiful things.  Can you imagine six kids around like that?  Often it was my grandmother, who, of course, I thought was ancient, but was probably in her fifties!  A lot younger then I am now.......

Then we would have lunch in the restaurant in Marshall Field's.  It was a BIG deal because back in those days people did not go to restaurants very often.  Especially kids.

One time my grandmother even made arrangements to take us to the Don McNeil Breakfast Hour show.  What a surprise!  I don't know what we expected, probably a big table with people eating pancakes and drinking coffee.  But, in fact, it was a small studio with three people and then an audience of about 25 or so.  We did march around at one point when Don McNeil said it was time to "march around the breakfast table".  Even though it was non-existent.  I remember it like it was yesterday.  And, yet, it was well over sixty years ago.  Amazing.

My Mom was with us that day and Don McNeil made a big deal about the fact that it was my Mother's birthday!  Today she would be 107 if she were still alive.

This morning at 6AM the fireworks began in San Miguel in honor of the Feast of the Immaculate Conception.  I lay in bed with a grin on my face thinking how my Mom would have loved the way
saints and feast days are honored here in Mexico.  Our buses are now decorated for the Feast of Our Lady of Guadalupe later this week and of course, there will be festivals, fireworks and heaven only knows what else.  Hardly a day goes by that someone or something isn't being honored.

What lovely memories! It is amazing when something that took place years ago is so clear in our memory. Who knew at the time of those things that we'd remember them forever? Just as so many things your grandchildren will remember forever, and tell their children about. As it should be.

The photo at the head of your blog is beautiful. I, too, do much less - it's not getting it out (I have others do that) and setting it up (that I have to have a hand in), but putting it all away that I dread. But I certainly enjoy it while it lasts.

Have a wonderful Christmas! We have so very much to be thankful for. I know you know.

Thanks Barbara for your comments. I always look forward to your
thoughts. Please have a lovely Christmas season and yes, we do have
much to be thankful for.

I like that construction -- and its accompanying sentiment. That "who was not a cousin" could have been exclusory. But, the way you formed the sentence, it is merely a descriptor. You leave the non-cousin as being in full commonality with the true cousins. It has a certain sense of Jean Shepherd about it. Nice work.

And I know what your response will be. We have had these exchanges before. You will say that you just wrote it without any thought of including or excluding. And that may be true. But it does not take away from the poetry of the sentence.

Merry Christmas to you, as well, my friend.

As you know, I just sit down and write with no forethought.
The words just flow and then I publish it.

Only you would notice something like that. Bless you.

I had been thinking of the church day and all the memories
that still clung to that date including the fact that it was
my Mother's birthday. So, I sat down and wrote that ditty.

I'll be in PV the second week of January. Trying to figure out
how to get to your "neck of the woods" for a visit. Bus? ha.
We'll see.

Will be going to Marshall Field's (Macy's today) on December 30 to see the tree and eat in the Walnut Room!

Perry, ENJOY! I did not know that that is a Macy's now.
I wonder if the escalator is in the same place.......it
was the first escalator that I ever rode on and it was
like a "magic carpet" ride!

Automatedcardsonline said...
This comment has been removed by a blog administrator.
10:57 PM

THE ONLY TRUE HACKER IN THE WORLD ® said...
This comment has been removed by a blog administrator.
9:17 PM

Just returned from a very brief visit to San Miguel this past Friday. What a lovely city and we look forward to returning for a week or longer stay. Thanks for your insight in your lovely city.

Unknown, thanks for taking time to send such a thoughtful note.
I'm so happy that you enjoyed SMA and will return!

It is a wonderful place IMHO.