Just When You Think Nothing New Can Happen........It Does!

After living in San Miguel for almost nineteen years, it would seem that dealing with electricity, gas and water delivery would be down to a science.  Yes, I know how to call the gas company for propane, although I no longer have to do that, as my landlord does!  But, I do call for the large water
bottles when I'm almost out.  Electricity either works or not.  When not, one dials 071 and reports the address and issue to CFE and then you wait. 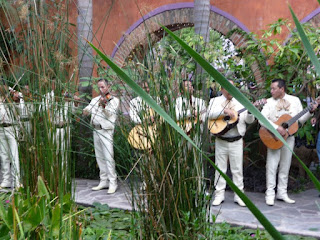 But, yesterday morning about 9:30AM, I heard strange sounds.  Beeps, whistles and more beeps.
The beeps were my microwave making a sound and the electric fence box that is stored in the laundry building on the property was beeping AND whistling.  The ceiling fans started going slower and the lights were dimmer when I checked them.  Uh oh!  In addition, my computer was on but would not go through the whole process to connect with Firefox.  Double uh oh.

Then there was a slight boom and I knew that a transformer had gone.  First, I turned off the computer and unplugged it.  Then I dialed 071 rather then call the landlord and reported the issue to CFE.

I really don't use that much electricity except for the computer and a lamp at night but what I had
forgotten was that the pilot light on the stove does not work when there is not electricity.  Although
I still had a bit, I did not want to tempt fate.  Instead of cooking a Sunday dinner, which I usually do,
I had a cold chicken sandwich with lettuce and avocado from chicken breasts cooked earlier in the week.  Delish.

At some point, I called my son to see if he had electricity since he lives only a block away and they
had nothing, not even a bit.

Out came my Kindle and I spent the afternoon reading a tantalizing novel about New Zealand.  At this point, I think reading books about foreign countries has become a favorite thing.  Korea, Japan, New Zealand and the areas around Mongolia are my favorites.  They can be historical or current.  All are fascinating to me.

Anyway, I digress.  About 5:30 my son called to report that they had electricity.  Aha, I checked the fans, the microwave and I no longer heard strange sounds when I plugged in the microwave - no beeping.  All was well with my world.

Having electricity allowed me to watch the boring Tony Awards.  Well, I lasted maybe an hour and then searched out something more interesting.  I have no idea which play got "the best" or who got "the best".  Musicals have never been my thing and it seemed that was pretty much what they were honoring.

In case you can't figure out what was "new" in all this, it was the beeping and whistling sounds I heard from the microwave and the electric fence monitor.  Good to know if the electrical current isn't up to par, that somehow a sound is made to prevent things from being used and ruined from low current.  I learned long ago if there is any question about current to turn off and unplug the computer.

Other then that, it was a very quiet Sunday and left me time to enjoy reading which is one of my "favorite" things.  How was your Sunday?
Posted by Babs at 10:55 AM

I spent Sunday brush hogging paths in a small stand of timber on my back lot, made rye buns and bagets and cooked a ham for ham and cheese sandwiches. The sandwiches went to Linda's parents, my mother and her sister this morning. The rye bread turned out perfect, not an easy thing what with rye flours lack of gluten. It was as light and fluffy as could be-you just have to be willing to wait for the dough to work.

SantaMedical said...
This comment has been removed by a blog administrator.
5:22 AM

On Sunday I spent six hours working in the garden. But then yesterday we had another torrential downpour... so I don't know when the swampy back yard will be dry enough to resume work.
Yes, life always throws something at us, just to keep us from being complacent.

Norm, you made me hungry talking about rye buns along with ham and cheese sandwiches. I would love to have some rye bread. No such thing in SMA! Ahh, a ruben would be heavenly.........You were a busy man on Sunday.


Likewise, Bill you too were busy in the garden. Aggravating when we have a plan but the Universe doesn't want to cooperate! Your gardens and flower boxes look wonderful as they are.........hang in there.

I have one advantage when it comes to electrical failure. When I lived in Villa Obregon, I would leave a ceiling fan on. When it started spinning, I was back in Reddy Kilowatt land.

But I do not need to do that at the house with no name. When the electricity fails here, the world's loudest generator clicks on to maintain power to the giant antenna in my backyard. When the noise stops, I have power. It is so nice of Telcel or Telmex or whoever to provide me such a convenient monitoring system.

That's a nifty thing to have Steve. Having lived through more hurricanes and no power for 36 years, I immediately go and turn a light on now, so that when the electricity comes back on, that light is lit.

Blessedly, I seldom need electricity, except for the fridge! Oh and the computer, but now with my phone, I can even bypass that...........

One Sunday in 2017, shortly after we moved here, our electricity went out. I checked and the neighbors had electricity. Was the CFE bill paid? We were using a property management company at that time to pay our bills. They said the bill was paid was sent out an electrician.

The electrician arrived promptly, and found the problem -- a loose wire / fried connector at the meter. He had a spare connector in his truck and replaced the fried one. Total cost including the part and service on Sunday was $500 pesos or about $25 USD. (We did pay more as a tip / thanks.) We were amazed at the price. In the US that might have cost 5 to 10 times more.

Glenn, you were smart to have an electrician come out. Most people wait for CFE and they never, ever come, ever. A good ending to a situation that, if the bill hadn't been paid would have been a saga.

Norm, on the rye bread: at LaComer they sell gluten in bags, about 1 pound. There are two ways to keep your rye bread from crumbling: add one tablespoon gluten per cup of rye flour; or: use a mix of wheat and rye, usually 2 cups of wheat to 1 cup of rye. Add a table spoon full of caraway seeds and off you go. Don't forget to turn up the temperature to about 375 degrees because of the altitude. Even then, give the bottom of the loaf a little thump to see if it's done: you can hear it.
If anybody has any bread baking questions, let me know. Long story about how I learned the tricks... next time you have about 2 hours, I'll clue you in :-)

Unknown, thanks for the info except Norm is in the Northeast. I think Ohio or in close proximity.
I just baked banana bread yesterday and have never had to change the recipe from the way I cooked it in the USA. However, there are other things I cook or bake that I do have to allow for the altitude.

Babs, banana bread is baking powder bread which bakes differently from yeast dough, i.e. rye bread. Among other crazy things I've done, I ran a bakery in a Maya village in Central America for several years. Since bananas were cheap and abundant, I baked banana breads -- to the point where I'm so sick of them I won't ever eat another one. But it started a little industry in that village, and now it's the village's staple to sell to tourists. No, I didn't have to adjust the temperature for powder bread. With that crude gas stove I had, the only one available, it was always a guessing game anyway.
For the European and Israeli tourists, I baked wheat and rye (yeast) breads and sweet breads. Rye was difficult to find. But in that village they sold the marvelous, old-fashioned, moist yeast that comes in cubes, it did miracles as compared to the dry yeast available in the US.

Marty, how fascinating! And how wonderful that you created a little industry for that village. I don't even use my gas oven here but have a countertop stove to use so I get even temperature.
Yes, back in the days when my children were little, they are now in their 50's, I baked yeast rolls and bread etc etc all the time. Never had a "bread maker", just made it. Haven't done that in half a century! Wow.

Your story is very interesting and I bet you have many more to tell. Thanks for sharing.

Babs, my goal in life: when I'm REALLY old (I'm sort of getting there), I want to sit in a rocking chair on a nice front porch, knee-deep in pets, with a very wide, wicked grin on my face. I already have a head start on the pets :-)
The pets are also what's making it difficult to rent a place in San Miguel, but I'll keep working on it. We have a short-place rental now but need to look around more.

Steve, you bring back old memories when you mention Reddy Kilowatt. When my grandmother had gotten electricity for the first time down on the farm in Georgia, she was one excited woman. All it was was one small cord hanging down from the ceiling in her farmhouse kitchen with a naked light bulb attached . At her excitement in 1955, one would have thought she had died and gone to heaven. Mom took me to Kress's 5 and 10-cents store in Savannah, and I found a little clay model of Reddy Kilowatt there for the total price of ten cents. When I presented it to my grandmother, she treated it as though she had been awarded an Oscar. Later, the children bought her a stand-up radio, and she would always listen to soap operas like "The Guiding Light" and "Search for Tomorrow" and, of course, "The Grand Old Opry." With electricity, a whole new world opened up for her. I'm glad I can remember that after approximately 60 years.

Wonderful story Dee. Thanks for sharing.