Gravitating to a new Book List is a joy to experience.  It is about this time of the year when writers publish the list of the coming "good books" or they talk about the ones from the previous year.

Subscribing to the BBC Book List along with the Washington Post has shown me many interesting
tomes, but, seldom are those books ordered. 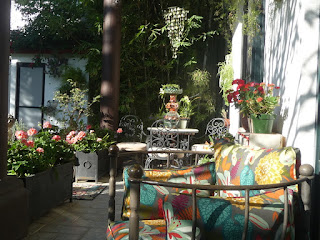 One of my favorite places to sit and read!

Luckily I have a Kindle with over 2400 books on it.  The majority purchased by others who are on the same subscription as I.  There is a treasure trove among all those books.  Yesterday it was gone through by me to upload about twenty books from the 334 pages of books that had eight books to a page!  Looking forward to reading each and every one of them. On my limited income, having all these books at my disposal for free is a true gift!

In the meantime, however, here is the list of my favorite books from this past year.  I read many more then this, but, these were the highlights.

The first was Pachinko - I did not buy this book, but rather, it was left for me by a house guest who had lived in Japan.  It is a fascinating book about South Korea and some of North Korea.  Fascinating.

About ten years ago a dear friend introduced me to Shadow of the Wind and the author Carlos Ruiz Zafon, a Spaniard.  Never had I read a book where the phraseology was like "flowing gold".  Often the words stopped me dead in my tracks and I had to read and reread them and marvel at their beauty.
At the time it was not apparent that it would become a trilogy but it was the first of three books including the next book, The Prisoner of Heaven and finally The Labyrinth of the Spirits.  The last book was finished, all 800+ pages last week.   It takes place in Barcelona and the cast of characters are quite memorable, to put it mildly.

My third most favorite book was Lost in Shangri La: A True Story by Mitchell Zuckoff.  It is set in World War II.  Fascinating and true.

The trilogy by Ken Follett with the finale being Winter of the World was, as always, brilliantly written with the most amazing research in the writing.  Never have I read anything by Follett that was not incredible.

When I find an author that I like, it seems to happen that I read everything they write.  That is the case with Erik Larson who I first discovered when he wrote about the Great Storm in Galveston and then about the Worlds Fair in Chicago.  This year I read In the Garden of Beasts.  Two other authors who write beautifully are Ann Patchett and Tan Twan Eng.  Two of Tan's books, The Gifts of Rain and The Garden of Evening Mists truly transported me to the country where he was writing these books.  Incredibly beautiful.

It is hard to pick favorites or to supply a short list - all were joys to read.

Here is a further list of favorites:     IN THE TIME OF THE BUTTERFLIES, Julia Alvarez;
A COLUMN OF FIRE, Ken Follett; THE JOURNEYER, Gary Jennings: BITTERSWEET, Colleen McCullough (her final book); A RIVER IN DARKNESS Nasaji Shikawa (about his escape from North Korea);  THE SECRET LIFE OF OBJECTS, Dawn Raffel; ELEVEN MINUTES, Paulo Coelho; ROADWALKERS (VOICES OF THE SOUTH),  Shirley Ann Grau; and last, but not least, two books by Ann Patchett, THE MAGICIAN'S ASSISTANT AND THE PATRON SAINT OF LIARS.

In the above books, I learned about life in North and South Korea. I learned about the indigenous people of Papau New Guinea in the 1940's before "white men" had ever been seen.  In addition two of the books I read were about the times of Marco Polo and his journeys.  Wow. Another about times in the Dominican Republic in precarious times.

The joy of reading, for me,  is expanding horizons and learning things about people or places or events that one has never known before.  Such a wonderful escape, often from reality.

Another great blog. I'll come back to look for my next book.

Impressive and inspiring. Most people I know, (except for Billie Mercer) I'm sad to say— educated, sophisticated people—hardly read any books at all. I read somewhere that in average nowadays college graduates only read ONE book a year. Our reading lists coincide to an extent: We've read Erik Larson's books, about the Chicago World's Fair, the Galveston Hurricane and the sinking of the Lusitania (is that his?) Also Pachinko, In the Garden of the Butterflies.

A couple of recent reads are Red Notice by Bill Browder (and how Putin operates, fascinating and scary); Bad Blood, about the $9 billion Silicon Valley scam by a young woman who pretended to have invented a machine to perform 200 blood tests with only one drop of blood. Rupert Murdoch, George Schultz, Jim Mattis, Betsy DeVos and whole bunch of other supposedly savvy investors lost their shirts...hundreds of millions. Happily, most of the investors were Republicans; it serves them right. Screw them. They have too much money anyway.

I'm finishing up The Line Becomes a River by Francisco Cantú, a Mexican-American who grew up near the Mexican border and worked for two or three years as a U.S. Border Patrol Agent. His story is moving and fascinating.

Coming up, as we head for the beach, is Michelle Obama's memoir, and The Library Book by Susan Orlean. Obama's book is an international bestseller that received rave reviews.

Now, let us light a candle to the Virgin of Guadalupe and hope Trump takes up reading, beyond subtitles on Fox News.

Thanks for a great list and to Al's additions.

Enjoy all of them. I could have added about 20 more but these were the "special" ones.